A Way Out of the Embassy for Julian Assange?

Report on Monday's press conference at the Ecuadorian Embassy in London called by Julian Assange of WikiLeaks and the Ecuadorian Foreign Minister that triggered wild speculation that Assange was about to surrender to the police outside the embassy on account of ill health. Read on.... 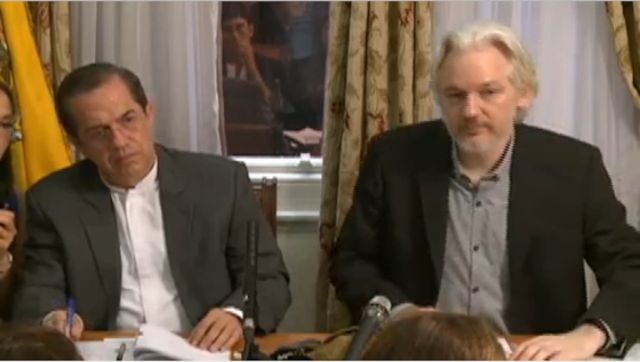 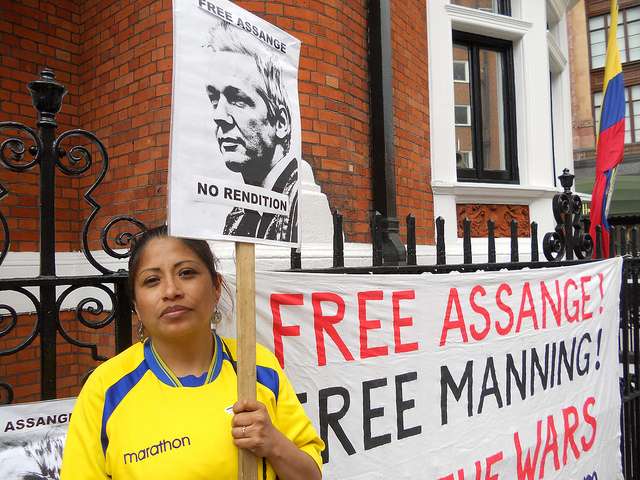 THE MEDIA GEARS UP FOR A LIVE ARREST

There was a buzz of anticipation all over the news channels and social media Monday morning and, apparently, outside the Ecuadorian Embassy in London; it went – loosely – like this:

“Reports suggest that Julian Assange is going to leave the Embassy any time.”
“Looks like he’s going to give himself up to police because of his health problems.”
“No statement yet, but the media are outside in force with some gathered inside for a press conference. Watch this space.”
“Extra police are on duty this morning, ready to move in if required, and a van ready to whisk him away to custody and certain extradition.”
“Suitcases are being brought out of the embassy as we speak.”

The idea that Assange might be about to stroll out the door straight into the clutches of the authorities was sending the media crazy with anticipation – after two long years in the embassy, what a scoop! Think of the pages that could be devoted to describing his downfall! All those smug journos ready to put the knife in and twist, to regurgitate every last detail of Assange’s alleged failings and to point out in no uncertain terms how he’s not like the rest of them, the “proper” journos – the ones, don’t you know, with fat salaries and expense accounts, who carefully pitch their writing to avoid ruffling too many feathers too much or too often, who play by the corporate rules and who not only fail to effectively challenge the things that are wrong themselves, but dismiss and ridicule those who do.

True to form, Esther Addley of the Guardian had already written an article outrageously smearing Assange as an “anti-privacy” campaigner – seriously, did she think she could get away with this? – the paper later having to amend it to “anti-secrecy”. In the Independent meanwhile, Mike Harris came up with this dire piece that predictably fails to examine any of the context of Assange’s situation, glibly telling him to go to Sweden, and also accuses Assange of planting rumours about his health, as if there’s no evidence that lack of fresh air and sunlight over a protracted period is problematic. Harris is clearly going to interpret any public appearance or statement by Assange as evidence of his egotism and he clearly either hasn’t listened to the press conference in full or has failed to take on board its central message. What’s worrying is how many people are going to read this stuff and take it at face value.

The scheduled press conference start time of 9am came and went but a livestream feed duly appeared of the journos chatting amongst themselves as they waited for the two empty places at the table at the front to be filled. Ten minutes later, just as Julian Assange and Ecuadorian Foreign Minister Ricardo Patiño arrived and seated themselves, the livestream went down. It took a few minutes to get it back, which is presumably why the version now available starts some way into the Minister’s statement and only those who were actually there will know what he said at the outset.

The bit everyone wanted to hear came at the beginning of the question and answer session, when Assange – looking mischievously over to the WikiLeaks spokesperson Kristinn Hrafnsson – announced that Hrafnsson

"can confirm that I AM leaving the embassy soon, but perhaps not for the reasons the Murdoch press and Sky News are saying at the moment…"

What came before that, in the opening statements from both Patiño and Assange, gives the context for this remark.