A key means through which NATO and its constituent members maintain their power is through the control of the mobility of all but the richest few, which has given rise to increasingly militarised border regimes across the globe. 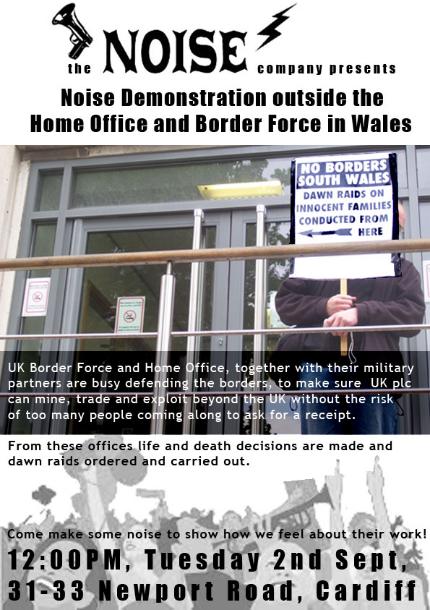 You can tell what country NATO is currently terrorising by who’s desperately trying- and dying -to get to the “safety” of the UK. From Afghanistan, Iraq, Somalia and other parts of North Africa, and more recently Syria. Countries that the West - frequently with their Saudi friends – have turned into “failed states”. People fleeing death, rape, their homes destroyed. Drowning in the Mediterranean. Being battered by cops in Calais, asphyxiated on container lorries, locked up in the prisons laughingly refered to as UK detention centres, put in solitary confinement or regular prisons if they standup for themselves. And then deported, often to their deaths.

Immigration control - aka racist state terrorism - is not just about UK racism. It’s about global capital’s strategy of free movement of capital. And selective control of labour, where wanted skills are allowed entry and the rest are expected to die quietly.

No Borders South Wales calls for a day of action on the theme of borders and anti-racism. We call for a “noise demo” at 12noon on September 2nd outside the regional headquarters of the Home Office, 31-33 General Buildings, Newport Road, where life and death decisions are made and dawn raids ordered and carried out. We also call for decentralised actions by affinity groups throughout the day (see Stop NATO Cymru map for ideas).

For more infomation on days of action and opposition to the 2014 NATO summit see: