I recently toured the Armenian village of Kasab where the Free Syrian Army and their Al Nusra allies slaughtered 88 of the 2,000 inhabitants and publicly beheaded 13 of these defenceless civilians, deliberately destroying the fabric and harmony of Kasab in the process. Some of the residents I spoke to were inconsolable while others such as 86 year old Sougman Saghdhian and his 95 year old bed-ridden brother Joseph try to get on with life as best they can and to put the carnage and their cynical Turkish incarceration behind them as best they can 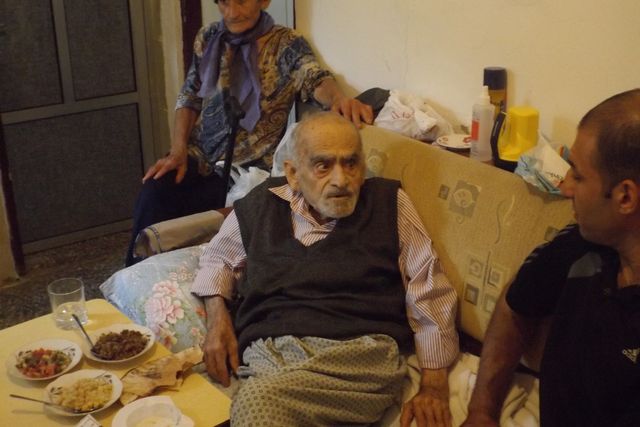 Sougman and his 95 year old brother 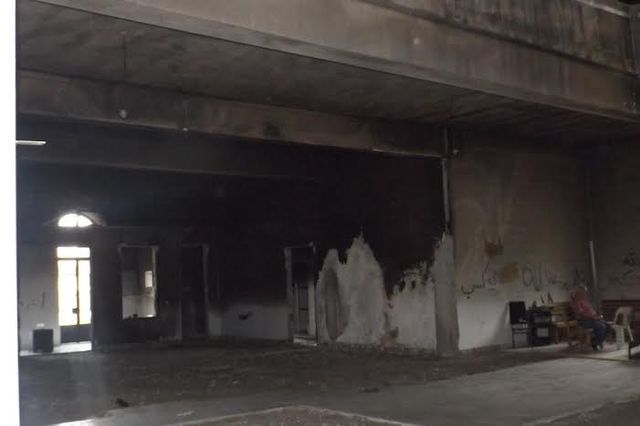 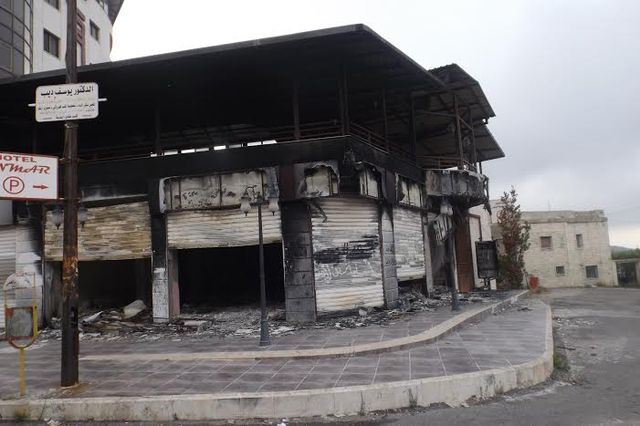 Burnt out shop in Kasab.

Although media personality Kim Kurdashian, to her eternal credit, did send a single, solitary tweet about the rape of Kasab to her millions of online disciples, the horrors of Kasab, like those in the rest of Syria, largely passed the rest of the Western world by. To them, it was just another pointless day in Hades for the Syrians and Iraqis beyond the media’s celebrity-obsessed Pale.

To the children of Kasab, however, this barbarity is their present-day reality and, most likely, their future as well until the jihadists and their Turkish controllers force them to permanently evacuate their ancestral homes and scatter them, like Iraq’s Christians before them, to the four corners of the earth. Like the remaining Palestinian Christian children of the West Bank, they know that, when all is said and done, this is most likely the only viable future the West will allow them. Because of circumstances beyond the reasoning of children or, for that matter, of our own, the Middle East must be cleansed of Christians and other minorities so that an artificial narrative serving the “manifest destiny” interests of civilisation’s ruthless enemies can become facts on the ground, as the Israelis say.

Although the minds of the children of Syria are as sponge-like as those of children anywhere else in the world, what they have to absorb is not fit for adults, never mind children. Give me the child, the old maxim has it, and I will give you the fully-formed adult. Many of tomorrow’s Syrian adults will be as seriously flawed as the Free Syrian Army rebels who raped Kasab and who brought their little children along for the entertainment of watching innocent Christians being beheaded and for the excitement of watching stacks of burning tyres destroy the insides the churches “the cross worshippers” used to sing their hymns and practice their harmless rites in.

Not all of these invaders and looters are necessarily irredeemable monsters. Although, for example, most of those who crossed her path insulted and threatened 91 year old Dikranuhi Mangigian and even smashed up her prized piano in front of her, two young Al Nusra thugs did bring her bread and water and a female jihadist from Raqqa also showed her some of the kindnesses we, in our turn, might extend to a stray dog. Samuel Poladian, a colourful 75 year-old character and George Kortmosian, his 70 year old drinking buddy, also have some good things to say about their captors.

But against that, we should remember that even Hitler’s SS engaged in occasional acts of kindness as well and many of them apparently enjoyed happy family lives when not gassing their Jewish captives to death. None of this should surprise us as, when all and said is done, even psychopathic killers need a break and an excuse to believe they too, unlike their hapless victims, are human and have loving, caring families they dote on.

The extremists who stole the teddy bears of Kasab’s children probably had such families, children who liked fluffy, cuddly toys and, like their parents, were not too concerned that those toys had been the treasures and comforts of other children, who were well-adjusted until the teddy bear thieves came to town.

I spent quite a bit of time with those children. We toured the burnt-out churches together, we picked up the discarded British and German medical supplies the invaders left behind them, we collected their discarded Saudi propaganda tracts, we collected bullets and machine gun belts from the refugee-camp ambulances the jihadists left behind and we joked and laughed with the Syrian Arab Army soldiers at the checkpoints.

Though all of these things are not the standard or preferred fare for transforming the child into the fully-adjusted adult, they are what passes for normal life in Syria. True, in Kasab, as in Ma’lulah, we did run some impromptu karate classes for the local children but therein too hangs a tale. Although their sponge-like minds are absorbing the horrors of the Syrian crisis, these children still want to be children. They wear the football shirts of Barcelona and Germany, they text and Facebook as much as their circumstances allow and they crave for normality, attention and plain, innocent fun.

The enemies of Syria are determined to destroy those innocent pursuits. They wish to take those young children and give us even more fatally-flawed adults. They do not want to build a caliph but rather they wish only to destroy. Their targets are not confined to the bricks and mortars of the towns, villages and communities they overrun but they extend to the local children and even to their dreams and simple comforts such as their teddy bears and the safety and normality of family life.

Despicable as these jihadists may be, we cannot say the West is much better. Our leaders’ occasional crocodile tears notwithstanding, we have very much placed our money on the rebel camp prevailing. We have armed the rebels and provided massive logistical help to the Turkish camps they operate from. We have allowed these mercenaries traumatize an entire generation of Syrian children so much so that, even though the most resilient will survive and even thrive, every psychological disorder imaginable is becoming manifest amongst the rest of them.

When you visit Kasab’s remotest homes at dusk and when elderly residents such as Samuel Poladian or the children accompanying us can differentiate between the different pieces of heavy artillery being fired a few kilometers away, you know this in not life as God intended it for children or for anyone else. Someone has caused all this carnage and visited it upon the innocents of Kasab and all of Syria.

Though we have not stolen their teddy bears, smashed up their playgrounds, murdered their neighbours or looted their homes, our indolence, ignorance and apathy have allowed the foot soldiers of Syria’s false revolution to do just that. Unless we make amends and work towards eliminating this takfiri cancer that warps all it touches, we are just as culpable as them.

Dr Declan Hayes is currently on his third trip to Syria this year. He is helping organize a conference in Damascus for April 24th 2015, tentatively called: Syria: Between Destruction and Reconstruction to mark the murder of all Syria’s innocents and to help plot a way forward out of the morass. He may be reached at