IS just released a video where they behead yet another hostage.

This time its David Haines , a hostage from the United Kingdom captured in Syria in 2013.

This is the video text --
My name is David Cawthorne Haines. I would like to declare that I hold you, David Cameron, entirely responsible for my execution. You entered voluntarily into a coalition with the United States against the Islamic State, just as you're predecessor, Tony Blair, did. [...] Following a trend amongst our British Prime Ministers who can't find the courage to say no to the Americans. Unfortunately, it is we, the British public, that will in the end pay the price for our Parliaments selfish decisions.

Executioner - This British man has to pay the price for your promise, Cameron, to arm the Peshmerga against the Islamic State. Ironically, he has spent a decade of his life serving under the same Royal Air Force that is responsible for delivering those arms. Your evil alliance with America which continues to strike the Muslims of Iraq and most recently bombed the Haditha Dam will only accelerate your destruction. And playing the role of the obedient lapdog, Cameron, will only drag you and your people into another bloody and unwinnable war.

[Executioner with a second British hostage]

Executioner - If you, Cameron, persist in fighting the Islamic State, then you, like your master Obama, will have the blood of your people on your hands.

No Gods No Masters 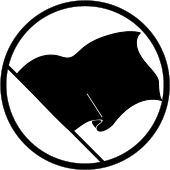 I have no interest in your religious shit, or your political shit. How long will it take for you to realise that ordinary people all over this world couldn't care less about your opinions, and have no time for your disgraceful abuse of other human beings..