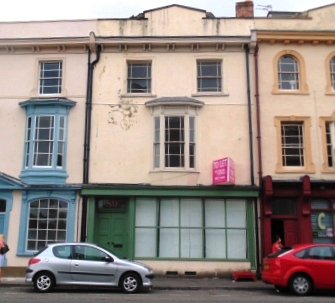 Inspired by the recent Week of Action against the NATO Summit in Newport a group of local activists took control of an abandoned office block on Lower Dock St., secured the building and now announce their intention to launch a new social centre and creative space for the Newport community.

The Newport Action Centre will host a weekly free vegan café, info-talks, various workshops, skill-shares and an art space, regular events to raise money for local causes, and a home for some of us who need it, to run the space from.

We chose to do all this in a building that has a long history of providing a focal point to bridge local communities from, and work for consensus and solidarity together.

The building – which is directly opposite the passport office – has since stood empty for around six months, gathering dust like so many other buildings in Newport while the cost of living continues to rise and forces more and more people towards poverty.

We chose to reclaim it for community use at a time when 9,500 police had besieged Newport, turning parts of south Wales into open-air prisons and openly flaunting their publicly-funded killing-machines on our streets. We went under the nose of the local police – whose headquarters stands just some meters away – entering the building without causing any damage or disruption and with the intention of liberating a space in increasingly oppressive, suffocating surroundings.

During the week of the NATO Summit we all got a taste of the power the state has over our lives. They used our money to control our movements with barriers and road closures, filled the skies with helicopters to watch us, and harassed and intimidatedthose who chose to resist the circus of warmongering that was the summit.

It is likely that many of the surveillance measures known to have been taught to Gwent Police and that we’ve seen imposed upon us, will remain in place long after the Summit is gone, with a recent report from the ‘Newport Business Development Taskforce’ recommended that Newport be turned into a ‘living lab’ for such technologies. The report was written by Simon Gibson, an associate of Terry Matthews, businessmen who have made huge fortunes working closely with arms companies. The recommended strategy will personally benefit both of them enormously. Despite being a city known for the arts, the old Arts College is now a block of luxury flats and recently many of the arts courses at the local university have been axed, with talk of specialising in software courses instead. The University building at Caerleon is now also about to be sold, with Terry Matthews probably the first in line to use it to get his hands into more arms and surveillance companies.

We intend to create an alternative to these surroundings – a space where people can gather to discuss ideas without fear of being tracked and monitored, be creative without being constrained by social norms, learn outside of a narrowing education system, which fosters competition, and live without being restricted by unnecessary barriers and borders.

We have already had our first event, where we discussed the impact of the Scottish referendum result, and we plan to open on Sunday September 28th for our first weekly café day.

We hope you can join us, we invite people to help make this space live up to its potential and be a resource for the community to share in the struggle for justice.

Nice one, good to see stuff happening in Newport...