Boneheads turn up late to their own protest 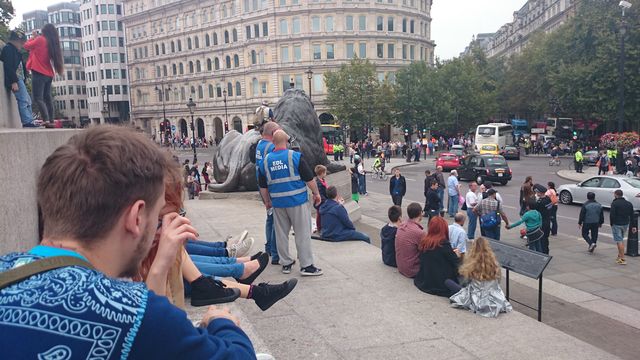 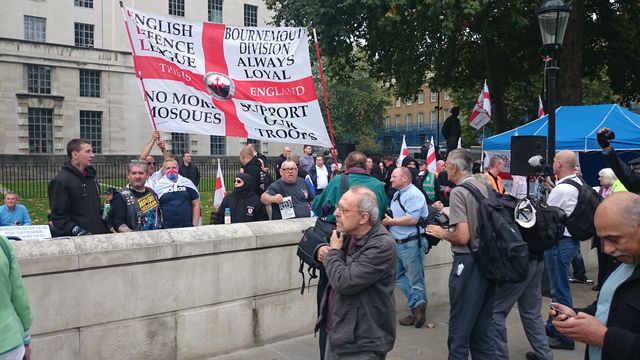 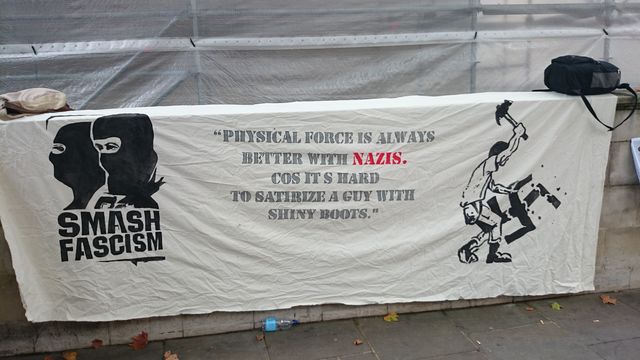 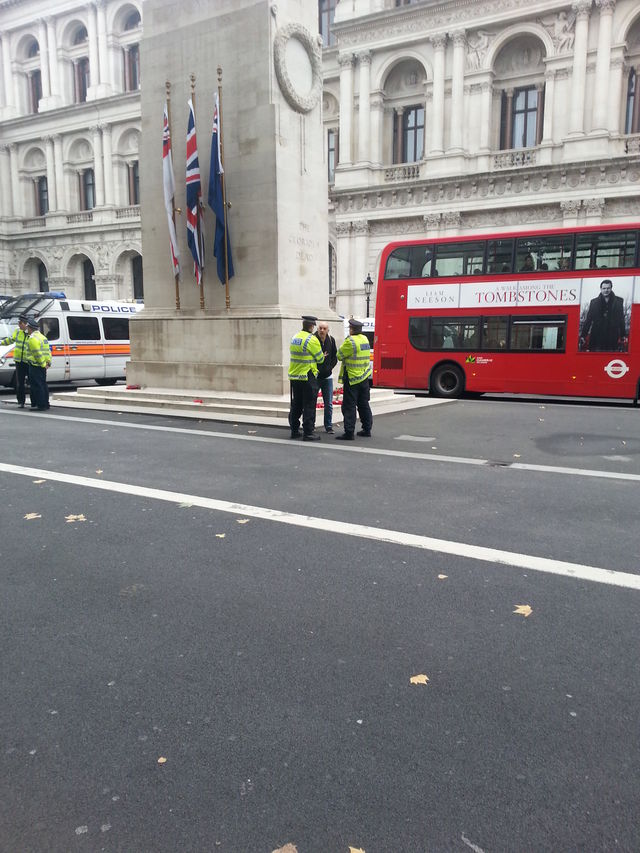 "At least Mussolini made the trains run time", goes the old fascist apologist expression. Well this , albeit false claim, couldn't be made about the boneheads that turned up to the EDL "National Demonstration" in Whitehall on Saturday 20th September. Being almost 30 minutes late, for their own racist fuelled catharsis, it was obvious that they couldn't organise a nazi salute at a Skrewdriver gig.
As we walked around Trafalgar Square, giving the slip to a couple of police spotters, we watched the flag waving sneerers fill the area around the King Charles statue. There was a fairly big crowd of fascists ( sorry don't know the collective noun for EDLers) but not any where near as many as the 700 that promised to attend on Facebook, and considering it was their NATIONAL DEMO it was pitiful. At the foot of Nelson's Column were a couple of EDL media team, yeah I know WTF RIGHT??! Media Team? We took some photos and moved off to the state designated protest area.
As we approached it was apparent that we were going to be vastly outnumbered. There were 50 -70 in the UAF counter demo pen. This later went up to about 100 but certainly no more. There was a UAF and a SWP table there and a great banner that was hung from the wall by the BlacBanner collective. As for actual antifa, well there was us and some other guys until about a half an hour later when an antifascist flag appeared and about 10-15 antifa dressed in black turned up. They couldn't get anywhere near the fascists and were directed by the police to join us. The poor turn out was a bit disappointing to be honest. There were some claims that many didn't want to protest in Whitehall, for what reason I don't know. Some may have feared kettling and arrest for previous actions, but even if that was the case the lack of attendance by those that didn't have these fears was unexplainable. This was London after all, you would have thought that more of the general public in a city of 9 million would have taken the time to say no to these idiots. This however is not to detract from the efforts of those that did attend. It's important that we make our presence known, and that the likes of the EDL realise that they can't command total control of the streets.
As the afternoon went on, the EDL had several different speakers spouting bollocks and the UAF and others did well in drowning out anything said by the former, with speakers of their own, and an assortment of chants; my favourite being , "Follow you leader, shoot yourself like Adolf Hitler!"
Around 4 to 4.30 the EDL started to peel of in ones and twos , down Whitehall towards Parliament Square. One Antifa raised our attention to this and we stayed down at the bottom end of the pen in case they tried an attack from there.
The EDL may have an organised media team , but their spotting team needs a bit of training. One lone bonehead, standing in the middle of Whitehall staring at us in an antagonistic way probably won't get him selected for MI5.
The threat of some sort of rearguard attack manifested itself in the form of four casuals trying to grab the BlacBanner banner, the Woody Allen quote obviously wasn't wasted on them. We were by then on our toes and formed a line blocking their effort and they were turned away by the police.
A couple of antifa had a look down Whitehall and there seemed to be a few EDL milling around hoping to pick a few people off. The antifa stuck together and moved off in a group and dispersed safely once the demo was clearly over (as far as I know).
To sum up, the antifascists that were there did themselves proud under such circumstances but we really need to make sure that we get the numbers up for the next one. Weakness on our part is the fascists greatest strength.
If any one does know why the antifa attendance was so low please post. Cheers
A quick mention for the BlacBanner guys on twitter @blacbanner and a new website soon to come.