Wrexham: Protest outside MP's office in advance of Iraq vote

Yesterday, seven people gathered at short notice from 4.30pm on a busy route close to the centre of Wrexham and outside the office of Labour MP and Shadow Minister for the Middle East, Ian Lucas, to protest government plans (supported by Labour) to join the US-led coalition that's bombing Iraq again. 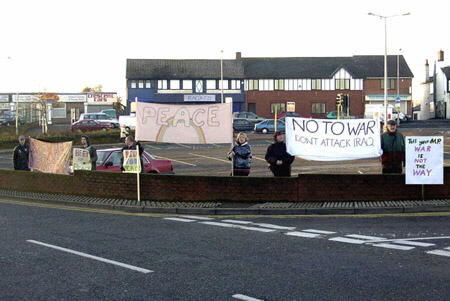 Wrexham banners back in 2003, protesting the Iraq war 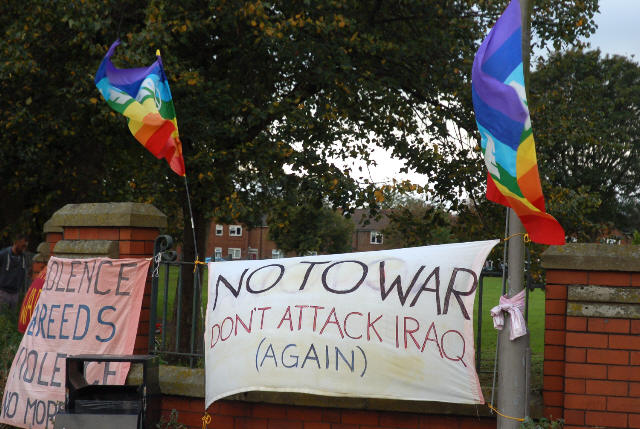 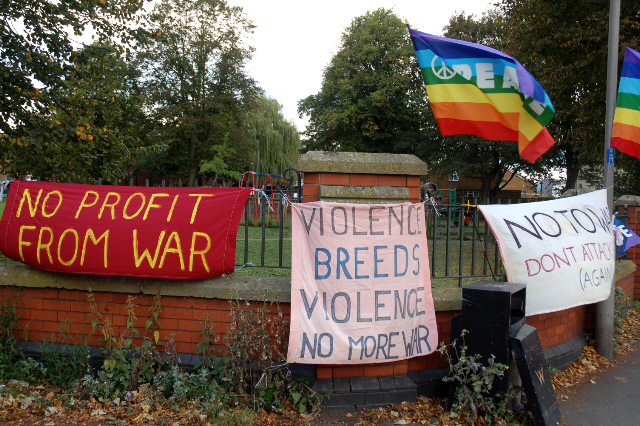 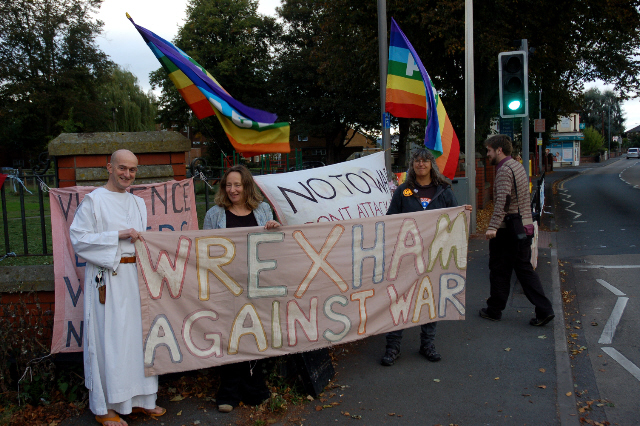 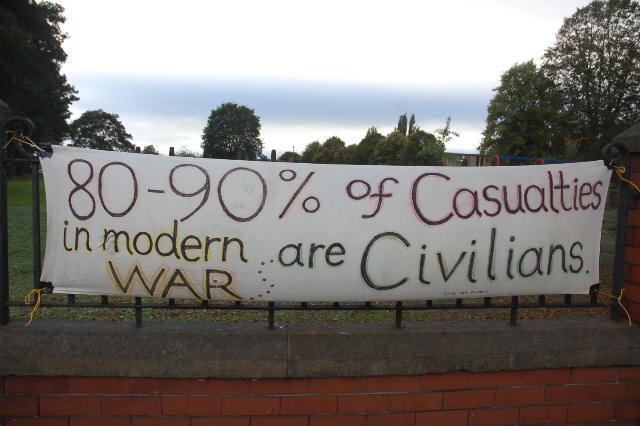 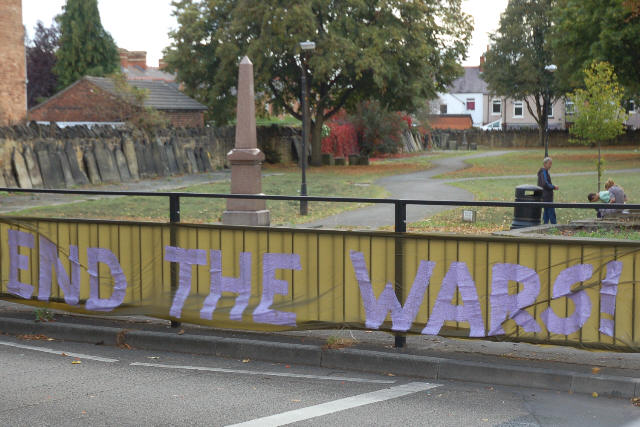 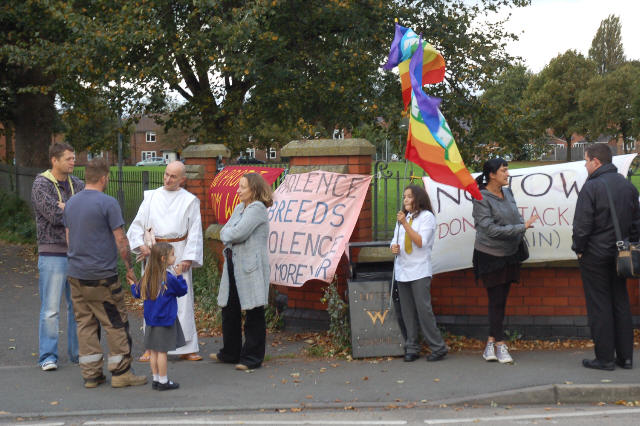 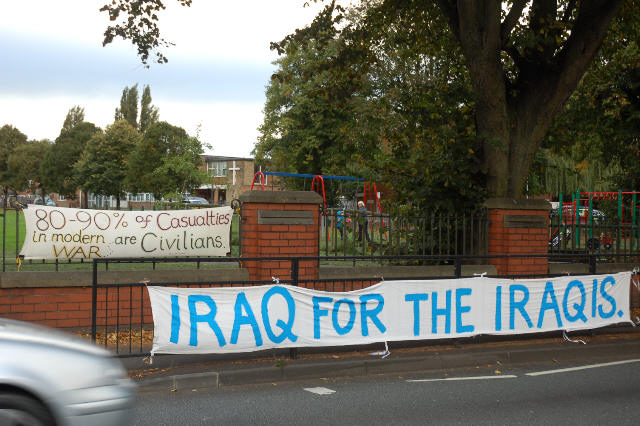 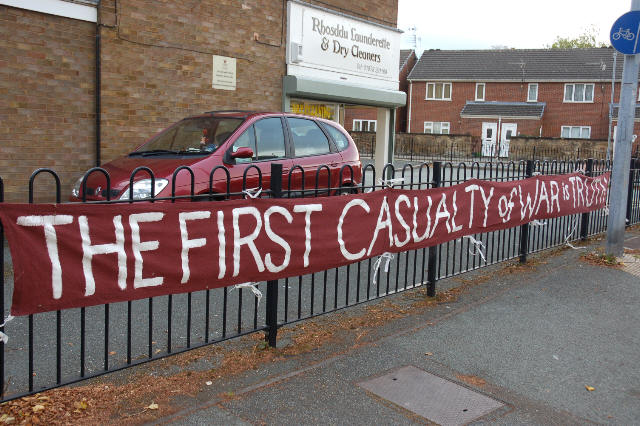 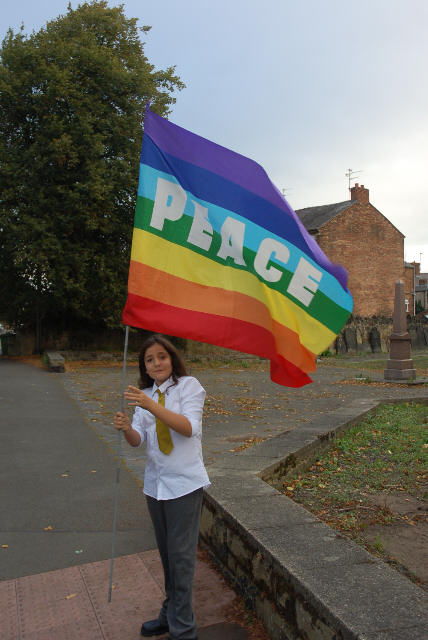 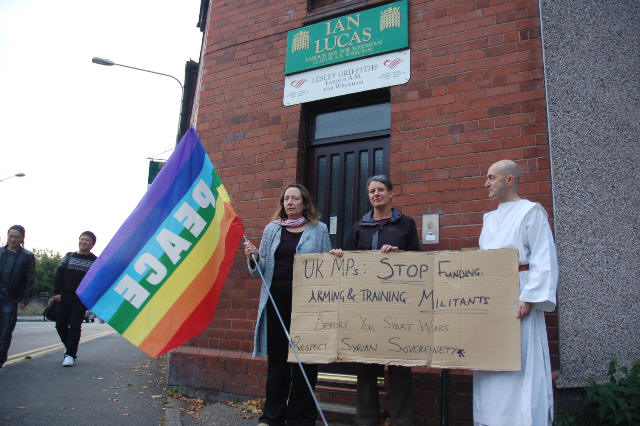 Ian Lucas wasn't in last night, or if he was he was hiding.

Using banners from 2003 that we'd hoped never to need again, we set up a highly visible presence on the roadside by MP Ian Lucas' constitency office. Our first and most enthusiastic supporters were the women working in the launderette opposite. A steady stream of cars passed by. Although there were a few obscenities shouted out of windows, we were overwhelmed by the support from hundreds of others - unprecedented for Wrexham - with people beeping and waving and making peace signs as they passed. Those on foot, including no less than four war veterans, stopped to talk with us. There was a wide range of views but no one seemed convinced that air strikes were going to do much good. What came out clearly is that people know they were lied to last time and are more sceptical of what the media is feeding them now.

Letter to press, copied to Lucas

The Tories, aided and abetted by the Lib Dems and Labour, look set to take us into another bloody and futile war in Iraq. Wrexham MP Ian Lucas is the Shadow Minister for Africa and the Middle East. If he and other MPs are going to vote for this folly, they should be honest that, like all other recent wars, it will only be successful for the military industrial complex. The bottom line is that war is big business. For everyone else, it will be another disaster.

Isis has fed off the despair generated by our previous ill-fated military interventions in the area and if anyone wants to argue about the barbarism of Isis militants, let's remember the half a million Iraqi children killed through genocidal UN sanctions to 1996 over which Denis Halliday and others resigned, deaths Madeleine Albright declared were 'worth it.' Let's remember up to a million Iraqis killed in an illegal war purporting to bring 'freedom and democracy' to Iraq. Were their deaths 'worth it' to create the mess Iraq's in now? Let's remember the countless civilians maimed, traumatised and displaced by our 'humanitarian' intervention, the lack of clean water, sanitation, food, work, medicines, healthcare, education in a country once boasting all of them. Let's take a long, hard look at America's new allies. Saudi Arabia is busy beheading people too, for example.

We have to tell our elected representatives to stop feeding the insatiable war machine, stop swallowing the lies, stop arming the next group of useful militants, stop pretending that war will solve anything and start working instead to find peaceful and just solutions. Here in Wrexham, we have just marked World Peace Day with events including one at St. Christopher's school that brought children from seven local schools together. Children get peace. It's about time politicians did too.

Ian Lucas issued a statement today to explain to his constituents why he's going to vote for war:

In a letter to constituents, he said:

“I have thought very deeply about this matter and, for the last three years, I have had the benefit of travelling widely in the region, meeting regional Government representatives and many people across the Middle East at what has been an intensely difficult time. I visited Iraq itself last year.

“In 2003, I voted against military action as I did not believe the case for it had been made out. Last year, I voted against military action in Syria. Today, however, the situation is very different. Firstly, the democratically elected Governments of Iraq and Kurdistan have asked us for help as their people are under immediate and serious threat for their lives. I have spoken in person to their representatives. In all conscience, I cannot reject their claim for help.

“Secondly, there is no doubt whatsoever that military action will be in accordance with international law.

“Thirdly, IS is a barbarous and ruthless enemy inflicting terror on the people of the region, as well as on innocent aid workers, journalists and others from outside the region. As you will know, a British citizen has already been murdered and there is no sign whatsoever that IS will respond to negotiation. The aim of military action must be to support the democratically elected Government of Iraq in building a non-sectarian society, an aim opposed vehemently by IS which is determined to inflict a barbarous regime on the country, restricting the human rights of the people of Iraq.”

Let's get one thing straight before we start. Ian Lucas claims he voted against the Iraq war in March 2003. Well, he did rebel up to a point by voting for an amendment that stated the case for war with Iraq had not been made out.

However, when it came to the crucial main vote on going to war, in spite of his views on the matter he merely abstained instead of voting against the motion. To repeat, on the substantive vote IAN LUCAS DID NOT VOTE AGAINST THE IRAQ WAR, WHATEVER HE'D LIKE US TO BELIEVE NOW. And that was the last we heard of his anti-war views. He was busy thereafter telling us that with war declared we had to support our troops, or words to that effect, and not by keeping them out of an illegal war and harm's way, I might add. I still have the cutting somewhere. Shame on him.

Going back to the current situation and his statement above, Lucas tells us glibly that he cannot in all conscience reject the pleas of those representing the people of Iraq and Kurdistan for help. May I remind Mr Lucas that the 'help' inflicted by the US-led coalition last time killed up to a million people and maimed and traumatised millions more, poisoned the land forever with depleted uranium, displaced a quarter of the population, destroyed the country's civil society and infrastructure effectively turning Iraq into a third world country with life expectancy down and infant/maternal mortality rates sky high, transferred Iraq's resources such as oil into the hands of foreign corporations and completely failed to bring any kind of peace to the region.

This latest vote for war is not about humanitarian intervention. It's about keeping the military industrial complex going. Ian Lucas was the Parliamentary Under-Secretary in the Department for Business, Innovation and Skills under the last Labour government and will know all about big business. You can be sure that what's good for the arms trade isn't good for the people (except those with interests in arms companies) but Ian knows which side his bread is buttered and it isn't ours.

Lucas is presenting his position as if it's unquestionable that British military intervention will help, that we're going to fly over bombing Isis out of existence and saving all those living in fear of their lives - remember how we were going to save all those living under threat from Saddam? We forgot to mention that something even worse might come along in his place. As many commentators have pointed out, bombing raids won't eradicate Isis and the government is already saying before we've even started that it will take years, which we should understand to mean it's part of their war without end. Further western intervention is set simply to increase resentment, to fuel IS recruitment and bring more misery all round.

As for legal, you'd never know Lucas was a lawyer from his unequivocal statement about legality. There is very much more than 'no doubt whatsoever' that the action will be legal. See, for example, this analysis by Dr. Gideon Polya.

It's not going to be any consolation to be able to say 'We told you so' again when this latest disastrous military adventure ends in yet more Iraqi tears.