Trigger warning: contains discussion of rape and links to articles which discuss rape. 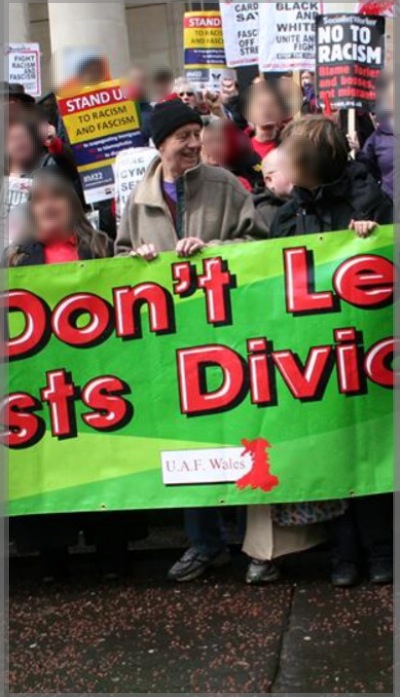 At the Cardiff University Students Union Freshers' Fair on Tuesday, September 23rd, inspired by similar anti-misogyny actions by students across the UK, two activists took leaflets to inform students of the organisational rape apology of the Socialist Workers Party, knowing that they would have their stall outside the students union as they do at most freshers' fairs, trying to present themselves as the party for student radicals.

As we began to hand out the leaflets in front of the SWP stall, one of the activists - a student - was approached by a man from the 'Stand up to UKIP' stall, who asked them to leave and became violently aggressive when the student refused, shoving his weight against the student, pushing them towards the road, repeatedly screaming that they were a 'fucking shit' and trying to violently grab the leaflets out of both activists' hands. He continued to escalate the violence - despite the lack of reaction from the activists - and presented himself as the thug he is in front of freshers.

That man was Jeff Hurford, long-term SWP loyalist in South Wales, known divider of campaigns and secretary of Unite Against Fascism Wales - the SWP front organisation with a reputation for failing to confront fascists, having refused to oppose last year's 'White Pride World Wide' rally in Swansea believing that the Nazi Nation Front wouldn't dare show without council permission.

Jeff Hurford is known in activist circles in South Wales and many good people have worked with him in the past, with several having found his divisive attitude dangerous to their campaigns. We know now that he is also a violent thug, willing to use force to silence the voice of the student radicals he seeks to recruit, to silence feminists and their allies who challenge the rape apologism of his party. Activists should take this into consideration when considering how closely to work with him and his 'comrades' who defend him in the future.

We are not surprised that this kind of violence exists amongst the remains of the SWP. After the extent of their misogyny was exposed, the majority of their members left, leaving the most sycophantic and reactionary to prop up the morally-bankrupt Stalinists of the Central Committee. What we witnessed on Tuesday was just a taste of their attitudes towards feminists and their allies. Those who joined have suffered far worse (

Worryingly, while their branches have largely collapsed around the UK, their Cardiff branch seems to have carried on with business as usual, calling into question the moral character of their members in South Wales.
Even more worryingly, the party as a whole seem to be making a slow comeback, possibly believing that people have forgotten about their disgusting behaviour.
We must make sure that people do not forget what those who still lead their cult - such as Alex Callinicos who warned against the 'creeping feminism' in the party at the time and those who asked Martin Smith's 17 year old alleged rape victim if she'd been drinking - are guilty of.

Eventually they called security to try and get rid of the activists, alleging that they had 'caused a scene' after we had been attacked - a tactic well known in SWP circles, with them having previously grassed direct action anti-fascists to the police. We weren't intimidated, calling the SWP out as the actual troublemakers and refusing to be moved on. All this time another member of their party was expressing his disappointment that the activists could do such a thing as hand out leaflets, uttering 'I thought we were comrades'.

We are not comrades with any organisation which covers-up rape, misogyny and violence against gender-oppressed people or whose high-ranking members use such disgraceful tactics as we witnessed. We choose to challenge oppression in all it's forms - whether that comes form outside or within the left.

indymedia. this article is slander

Jeff Hurford is a committed anti fascist, and long time member of the swp. he is a loyal swp member, and follows the swp line. so what? you may disagree with it, but Jeff is not a misogynist or racist or anything like that. He is not. his crime is only that he is loyal swp and like in most of these parties, the cadre follow the leadership.

regarding the white pride demo, I don't know the details, but the UAF does not follow the tactic of antifa, of looking for a street fight with the fascists. I think this is the root of the disagreement. a disagreement over tactics.

if you want to attack the swp- go ahead, but do it in disciplined way.
if you want to attack smith and the swp leadership - ok
but you have no right to do this cheapo tabloid style job on Jeff.
ie the claim Jeff is a 'violent thug'.
really? he's an old man! are you telling me that some student anarchos were seriously threatened by an old man?

I think that whoever wrote this article should apologize to Jeff Hurford and do a self criticism regarding the ethics of this kind of article.

indymedia and the internet in general is great in the sense of allowing anybody to publish. but in the end, if anyone can attack anyone else anonymously with outrageous self righteous slander, sectarian crap, such as calling the swp a 'cult' etc. i often wonder where indymedia and similar media is going.