GMB serves ASBO on Amazon.co.uk over tax avoidance and poor treatment of staff

So hostile are Amazon that union organisation is driven underground adopting the tactics of the French resistance or human rights campaigns in totalitarian regimes says GMB. 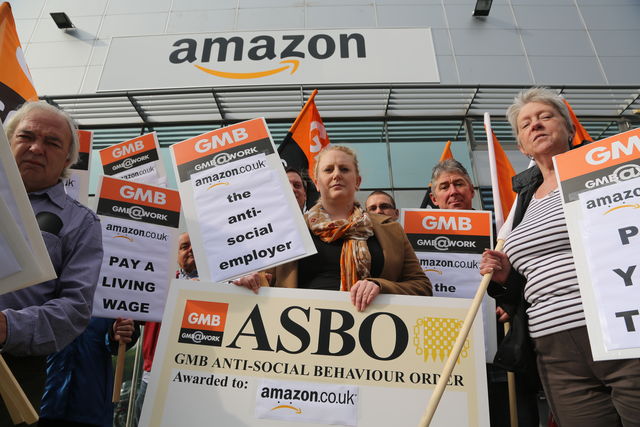 GMB, the union for Amazon staff, ha held a protest demonstration outside Amazon’s depot in Croydon.

During the protest GMB presented Amazon with a GMB corporate ASBO (Anti-Social Behaviour Order) for their tax avoidance and poor treatment of workers.

Amazon employs 7,000 permanent staff and about 10,000 and casual staff in the UK. It also employs 5,000 seasonal staff. Amazon has operations in Croydon, Doncaster, Dunfermline, Gourock, Hemel Hempstead, Milton Keynes, Peterborough, Rugeley, Swansea, Slough and Holborn in London. Amazon plans to double the number of warehouses it operates in Britain in the next three years.

Rob Macey, GMB Senior Organiser, said “GMB will hand a corporate ASBO (Anti Social Behaviour Order) to Amazon as a result of their tax avoidance and poor treatment of workers.

Amazon deny their staff the freedom to combine and be collectively represented by GMB and union activity has to be kept underground for fear of reprisals.

So hostile are Amazon that union organisation is driven underground adopting the tactics of the French resistance or human rights campaigns in totalitarian regimes.

1 Some GMB views on Amazon business model, on employment and taxation:

Where it differs from other retailers is its refusal to pay proper taxes or to treat its workers properly. This gives Amazon an unfair competitive advantage and is part of the reason why so many established high street names are going to the wall.

GMB is working to strip away the high tech image and expose the exploitation involved in their business model.

Many staff at Amazon are actually employed by employment agencies in casual or temporary jobs with no job security and no guaranteed incomes. Using employment to meet fluctuating demand for labour is equivalent to selection at the dock gates in Victorian times and is casual labour of the worst kind.

Amazon pays its UK staff just above the national minimum wage of £6.31 per hour. Paying a minimum wage rather than a wage workers can live on obliges taxpayers to top up wages for staff with families. Working families tax credit is a subsidy to a company like Amazon which pays little corporation taxes.

Staff complain about a culture of bullying and harassment endemic in the dataveillance that comes from staff being required to wear digital arm mounted terminals AMTs with no agreed protocols re breaks, speeds etc.

Requiring employees to wear AMTs and subjecting them to dataveillance, while denying them union rights, takes away the consent essential for the positive use of digital arm-band devices. Members say it is human automation – they are kind of robots with no say. We need to work on improving ergonomics for our members.

GMB seeks to ensure that Amazon pays proper taxes. In 2006 Amazon transferred its UK business to Luxembourg and reclassified its UK operation as simply "order fulfilment" business to qualify for lower taxes. The Luxembourg office employs 380 people. The UK operation employs up to 22,000. GMB has called for this abuse to stop.