International solidarity call for D.A.F & The People of Kobanê

Call from Denver Anarchist Black Cross for international financial & material solidarity for Turkish anarchist group Devrimci Anarşist Faaliyet & their campaign to open the border so the people of Kobanê can be assisted in their struggle against ISIS. 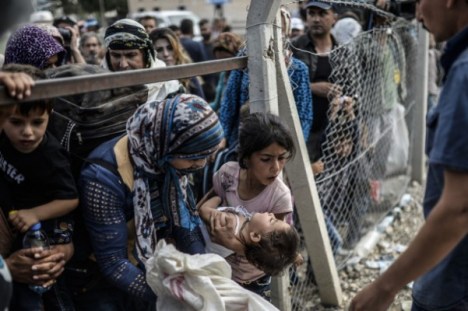 For more than a year, thousands of volunteer fighters have been defending the autonomous revolution of Rojava (in Northern Syria) from the Islamic State (ISIS). Since this past July the North Syrian city of Kobanê, in the central canton of the Autonomous territory of Rojava, has been under siege by ISIS. ISIS fighters, armed with modern U.S. manufactured tanks, artillery, and small arms have been held at bay by volunteer fighters affiliated with the militias of the Kurdish People’s
Protection Units (YPG) armed with dated small arms and improvised weapons.

Tens of thousands of residents of Kobanê, mostly ethnic Kurds, have been forced to flea to neighboring Turkey, made refugees in a country that has historically persecuted and oppressed them.

Hundreds of Kurdish volunteers have crossed the border from Turkey to help aid in the defense of Kobanê. Turkish soldiers and police have attacked those volunteers and observers, including international media, with teargas and batons, in attempts to seal off the border and prevent aid from reaching those struggling to hold the city against ISIS.

In response, anarchists from the Turkish anarchist organization, Revolutionary Anarchist Action (Devrimci Anarşist Faaliyet, DAF) have joined the efforts to keep the border open, as well as support those struggling in Kobanê and those made refugees from the fighting. DAF members are taking part in guarding the border against ISIS movements in and out.

Funds are urgently needed to support their work, especially to aid in the efforts to provide material aid for those who have been displaced by the conflict and forced to flee to Turkey.

We, as international allies of Devrimci Anarşist Faaliyet, call on all who see affinity with those struggling and suffering in and around Kobanê to help assist in these efforts. No amount is too small or too large. All funds raised will be sent directly to the DAF to be used as needed in their efforts.

If you want to donate financial or material solidarity in the way of cash, computers (laptops), video cameras, phones and other items, please email: