Biofuelwatch, the London Biomassive and UKWIN will be protesting outside the Green Investment Bank's 2nd Birthday Celebrations at 5pm on Tuesday 29 October at 2 King Edward St, nr St Paul's, EC2A 1HQ. We will be targetting GIB's wilful, ongoing, investment in Big Biomass and Waste Incineration. See

https://www.facebook.com/LondonBiomassive. There will be cake and music! 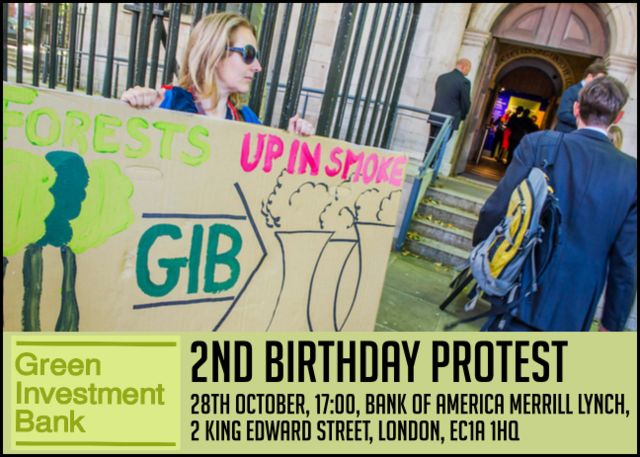 The GIB invested an initial £100m in Drax power station’s 50% conversion from coal to biomass, which will allow them to burn 15m tonnes of imported wood a year – the equivalent of 1.5 times the entire UK annual wood production!

Without the GIB’s kick-start, Vince Cable claimed the power station would have had to close in 2016. The GIB’s investment has extended the coal burning life of this dinosaur long into the future – up to 2027 – and in the process increased forest destruction and carbon emissions.

Drax has been shown to be burning pellets made from whole trees, from clearfelling of native wetland forests in the southern US – some of the world’s most biodiverse forests. On top of this, DECC’s recent carbon calculator shows that burning biomass like this actually leads to more carbon emissions than making electricity from coal.

We’re also campaigning to stop the GIB from supporting new biomass power stations at Avonmouth and Southampton, after Helius Energy revealed they were in discussions with the bank.

A new threat is a huge biomass power station at Tees Port that MGT Power want to build. They’ve already been granted new subsidies for the plant, and the GIB could step in to make sure they get the finance they need. If built, this plant would be more than 4 times the size of the biggest dedicated biomass plant currently operating in the UK.

GIB recently produced a heavily criticised report arguing that much more investment into Waste from Energy is needed, and the bank is persisting in investing in incineration projects in N Ireland and elsewhere.

UK Without Incineration Network have clear evidence that Waste from Energy is dangerously polluting and very inefficient; that there is over-capacity in the industry already; that incineration drives down recycling and re-use rates; and that there are far more jobs the reuse and recycling sector than in incineration.

Biofuelwatch, UKWIN and local environmentalists protested at the Green Investment Bank’s two Annual Review events in London on 25th and Edinburgh on 26th June as part of their calls on the GIB to stop investing in waste incineration and biomass. This included calls for the revocation of the Bank’s controversial investments in Drax and several other biomass and gasification projects.

We’re taking these demands to the GIB’s 2nd birthday celebration – please join us to say no to forest destruction and polluted communities.