Good turn out but disappointing. 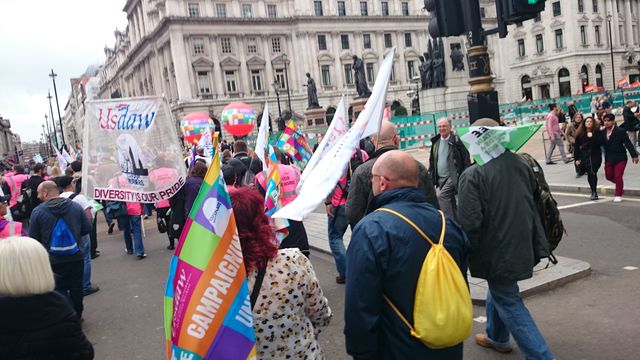 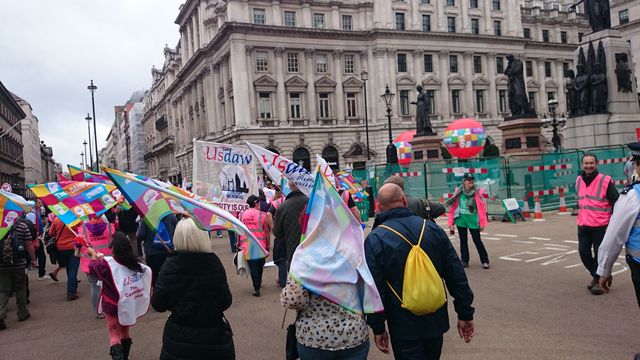 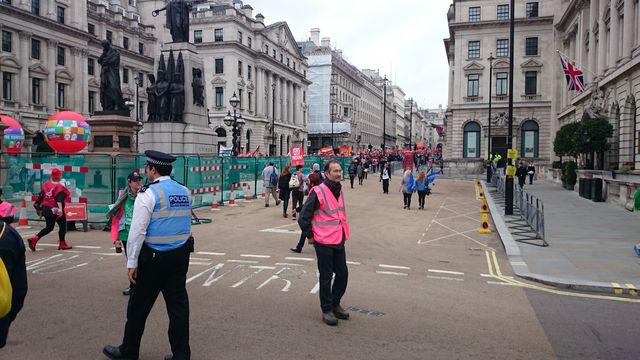 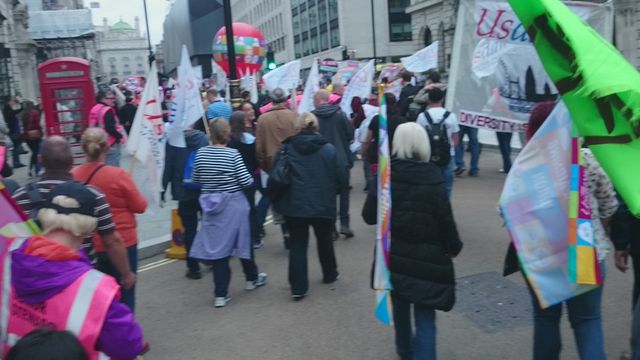 As we walked up Whitehall, the sound system blasting, we could see the sea of red, coursing around Trafalgar Square. Ducking under the tape we joined the march for a pay rise organised by the TUC and attended by many different groups. The sound system added to the party atmosphere, the music occasionally drowned out by UK Uncut shouting “pay your taxes” at the usual repeat offenders. We ended up at Hyde Park and stopped to rehydrate and discuss what to do next.
There had been quite a bit of chat on the social media of breakaway groups. Black block had managed to break away but nonetheless ended up at Hyde Park with the rest of us, swamped by TSG. Although Uncut had promised some surprises they too ended up with us. There we all were subjected to the same old speeches and some dreadful folk music.
As I looked around some people weren’t even bothering to hang around for the speeches. Dumping their TUC and Uncut placards in the bin, obviously satisfied with their annual two hours worth of protesting. Within an hour the park was starting to really empty.
I know this is probably the end of the protest season, barring the Million Mask March, but with it with being so near the 5th of November I just wish it had gone out with a bit of a bang. But then when we phrase it terms of a “protest season”, perhaps therein lies the problem. Capitalism doesn’t take a break and maybe neither should we. This is easier said than done. There are many activists who already spend most of their spare time dedicating themselves to their various causes and it’s physically and mentally tiring. We are five years into this government and their unprecedented austerity cuts and it is still hard to get people on the street that are willing to stay on the street once the “official” protest is over. Many can’t because of jobs and family responsibilities, but Occupy have at least shown that it is still possible.
Occupy have been quiet lately and haven’t occupied anything substantial until now. Their occupation of Parliament Square, which is continuing after seven days of police harassment and bad weather, is nothing less than miraculous. Alright, they have now been kicked off the main square, but they have managed to maintain quite large numbers, held a schedule of speakers on many different subjects and attracted some publicity.
I think Occupy embody what is at the heart of our collective struggle against capitalism; the rejection of private property. They don’t conform to the sanctioned protest where protestors dutifully go where they are told; they don’t leave when they are told to. And this simple act, by a few people ties up a lot of police. It inspires people and shows that there is an alternative to just simply marching from A to B. If smashing windows, paint bombing tax dodgers or fighting the police isn’t your thing, sit down and stay there. Occupy have showed that it’s doable, with just a few numbers. For those that live nearby you can do a shift system, a few hours on a few hours off. For those of us that don’t live nearby maybe a day or two each and the numbers will be sustained. With the cops tied up, it can be used as a spring board for other direct actions to be sustained in an act of continual attrition.
I still believe that there are enough activists out there that can make difference. After the early successes of UK Uncut, Occupy and the student protests we seem to have lost our way somewhat. Many splits have appeared and theory seems to have taken precedent over action. Regardless of our different theoretical perspectives we should be working towards outright rebellion. Full Revolution. The progressive politics of the Sixties has come to nothing. We are now living in a more elitist country than before the Second World War. Things are going backwards and they are not going to stop and reverse with us being nice, compliant protestors asking our (non) elected officials to listen to our demands or by sitting at our keyboards discussing the minutiae of the latest theory that only a few people give a fuck about anyway. The Welfare State and the NHS are being dismantled. London is being socially cleansed. Our schools are being taken over by corporations and religious groups.
Let’s rest up if we have to and come back afresh. Afresh with new ideas, passion and enthusiasm. Capitalism has to go, and once it does most of its associated oppressive structures, patriarchy, misogyny, racism, sexism and class war will be ours to dismantle. This can only be done through active participation by those who really want it. By those who are willing to walk away from the keyboard and get out on the streets and reclaim them.

My article on Occupy Democracy -