An important article from our Iranian Anarchist Network comrades that they wish to share with all genuine leftists, anarchists & other progressives in the Western World - we ask that you please concentrate and put aside any inbuilt cognitive dissonance re : "Islamophobia" and please read and understand that what is explained here is not some kind of unwarranted / bigoted attack against Islam but an extremely passionate & angry commentary against the barbarisms that are committed in the name of Islam by the brutal Islamic regime of Iran. Please share with your networks and if you are able to contribute a better English translation (source at bottom of article), then please do so! 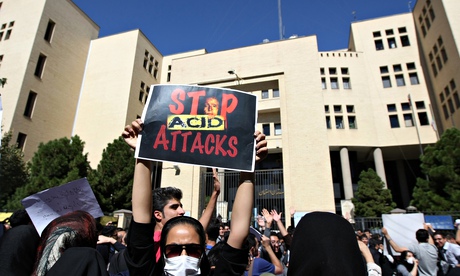 Here then, is an amazing short speech by Iranian anarchist musician Shahin Najafi, (who has millions of supporters inside Iran and overseas) against Acid Attacks against brave Iranian women who refuse to wear the Hijab / Islamic head-dress.

"I have received a message from an innocent girl in Iran who is living in terrible fear of being attacked by the Islamic police!!

This reminds me of a famous expression:

'First they came for the Socialists, and I did not speak out—
Because I was not a Socialist.

Then they came for the Jews, and I did not speak out—
Because I was not a Jew.

Then they came for me—and there was no one left to speak for me.'

We stayed silent and did not react when they began the mass executions.

We stayed silent when they tore the bodies of innocent Kurds into pieces.

We stayed silent, when they killed all the other brave nationalities in Iran, like the Turks, the Balochs, the Arabs, the Turkmans, the Gilaks, the Ashuri, the Armenians andthe Loristanis : We ALL stayed silent!

When the Islamic rulers began the next wave of executions in Iran, we stayed silent.

When the "Chain Murders" of our progressives began, again we stayed silent!

When two years before the "Arab Spring", in Iran, after millions of Iranians peacefully rallied, they arrested tens of thousands of innocents - many of them were raped with broken bottles, tortured and then murdered - their mutilated bodies returned to their parents - We stayed silent!

When they massacred University students - again we stayed silent!

When they stripped naked innocent political prisoners and tortured them, yet again we stayed silent!

And NOW that they are attacking Iranian women - Girls, Daughters and mothers with ACID, and ruining their lives forever in this way, are we also going to remain silent?!

(Translation note : the above text is also a kind of idiom / allusion to Western leftists' complete silence regarding the crimes of the Islamic regime in Iran for over 36 years!!!)

Start A Revolution, Say It Loudly And Without Fear :

NO TO RELIGIONS, NO TO ISLAM, NO TO CAPITALISM, ZIONISM AND IMPERIALISM!!!!

Further information on the crimes committed against the people of Iran by the Islamic regime :