Philippines: Lawmakers studying the filing of bill against hate crimes

A pair of reform-oriented lawmakers has expressed plans to file a critical measure that could curb hate-motivated crimes and violence directed at the lesbian, gay, bisexual and transgender (LGBT) community. 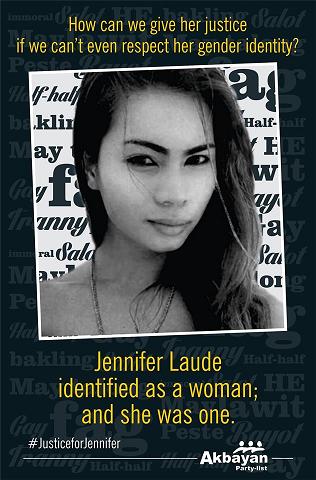 Akbayan Rep. Barry Gutierrez and Dinagat Islands Rep. Kaka Bag-ao drew upon the recent brutal murder of Ms. Jennifer Laude by a US serviceman believed to be a manifested hate crime as grounds for a renewed effort to push for a nationwide protection of LGBT persons.

"Akbayan is seriously studying the possibility of filing an anti-hate measure that will increase the protection of members of the LGBT community who remain vulnerable to various forms of violence and crimes due to their sexual preference. We have tinkered with this before and Jennifer's killing has created a new urgency," Gutierrez said.

"We need to exert a firm action to deter perpetrators from committing these crimes that stem from no particular reason other than their own prejudice based on a person's sexual orientation or gender identity and expression (SOGIE)," he added.

Gutierrez said the bill under consultation aims to achieve three (3) important reforms in strengthening protection of the LGBT community:

1. The bill is being studied in relation to the constitutional freedoms in the 1987 Philippine Constitution, including freedom of expression. This is to ensure that it will not muzzle nor penalize the people's freedom of expression but violent crimes which target, among others, people because of their SOGIE.

2. We are studying further revisions to the Revised Penal Code which will either (a) include as an aggravating circumstance to crimes against persons or property the circumstance of committing such crimes because of a bias against one's SOGIE or (b) qualify a crime against person or property to a different crime of higher penalty whenever the perpetrator committed the crime because of a bias against one's SOGIE (for example, instead of homicide the crime will be murder), with a presumption that whenever the victim is an LGBTI person then the crime is already qualified.

3. We are also studying the manner by which 'hate crimes' may be proven, given the existing definitions of crimes.
Gutierrez said that the opinion and views of the LGBT community will be duly and extensively sought in the crafting of the proposed measure to ensure its effectivity.

"We are currently in consultation with the LGBT community for the necessary actions that will put an end to these unwarranted hate-motivated acts and hopefully eliminate further violence and loss of lives among its members. Further, we hope to set in place the fitting penalties that will deter the perpetrators from committing these acts and allow the LGBT people to openly express their sexual orientation," the lawmaker said.

The lawmakers also urged Congress to swiftly and immediately pass the Anti-Discrimination Bill, saying this will usher in much-needed action to secure the rights and welfare of the LGBT community.

Filed on July 1, 2013, House Bill 110 seeks to prohibit all forms of discrimination and to provide penalties against discriminatory practices on the basis of sexual orientation and gender identity (SOGI).

According to Section 3(c) of the bill: "Discrimination shall be understood to imply any distinction, exclusion, restriction, or preference which is based on any ground such as sex, sexual orientation, gender identity, whether actual or perceived, and which has the purpose or effect of nullifying or impairing the recognition, enjoyment, an equal footing of all rights and freedoms."

"This measure will ultimately bring forth a culture of acceptance of LGBTs in our society. It does not prescribe special rights. Instead, it cements into our legal system the basic rights found in the Constitution and in international agreements," said Bag-ao, the principal author of the bill.

Bag-ao called on her fellow legislators to act against any form of discrimination against the LGBT community.

"It is our duty to create safer spaces for Filipino LGBTs. By passing legislation against discrimination and hate crimes, we can ensure that the rights, welfare, and dignity of our fellow citizens are upheld and protected. Now, more than ever, concrete action on the part of Congress is an imperative. Clearly, in the murder of Jennifer, our struggle goes beyond discrimination on the basis of gender identity or sexual orientation. Our fight extends to hate that is translated into violence," Bag-ao said.

On the murder of a fellow woman

Jennifer Laude, a trans woman, was killed out of hatred.

I am writing this open letter fully aware that authorities are in the process of investigating Jennifer’s murder. This death has sparked many conversations that need to be guided by an undeniable truth: No human being deserves to be treated with violence and discrimination because of his or her sexual orientation and gender identity.

The Visiting Forces Agreement (VFA) enabled the harm that Jennifer experienced, but it is but one of the many factors that led to this injustice. As we struggle to deliver justice for Jennifer and her family, as we correct this unfair military agreement between the Philippines and the US, we cannot ignore one dangerous belief that exposes Jennifer and other transgender people to harm: the idea that she is a fake woman, that she must have lied to the perpetrator, and therefore she deserves what happened to her. Nanloko sya kaya siya pinatay.

As a woman, I appeal to all to understand how dangerous gender biases can be for trans people like Jennifer.

Jennifer Laude identified as a woman; she was one, and I am happy to call her a fellow woman. It is a fundamental right of any individual to define his or her own gender identity, and no one should experience violence and hatred because of the gender they live in. Our trans brothers and sisters face the threat of violence or violence – even death- because we fail to imagine that human sexuality is diverse and complex.

But diverse and complex it may be, it doesn’t prevent us to recognize and respect what makes all of us human – our inherent dignity. The perpetrator of Jennifer’s death may not have not been able to understand Jennifer’s sexual orientation and gender identity, but nothing prevented him from recognizing and respecting Jennifer’s humanity, and that is precisely his crime not just against Jennifer and her family, but against all of us.

In the same level, it is also the omission committed by those who continue to deny Jennifer and other trans people of their right to define their gender identity, and that omission fans the hatred that allows discrimination and violence against the LGBT community to happen, and to happen with impunity. Jennifer is a woman, and in her death let us not perpetuate the injustice against her by denying her womanhood.

The hate crime committed against Jennifer is an affront to the dignity of any human person. Let us not fan the hatred that led to her death.

Instead, let us be one in condemning violence and discrimination against lesbians, gay men, bisexuals, and trans people. Let our solidarity bring forth a Filipino society that embraces the dignity of all Filipinos, regardless of sexual orientation and gender identity.