Execution of "Occupy Democracy" and the Banality of Evil 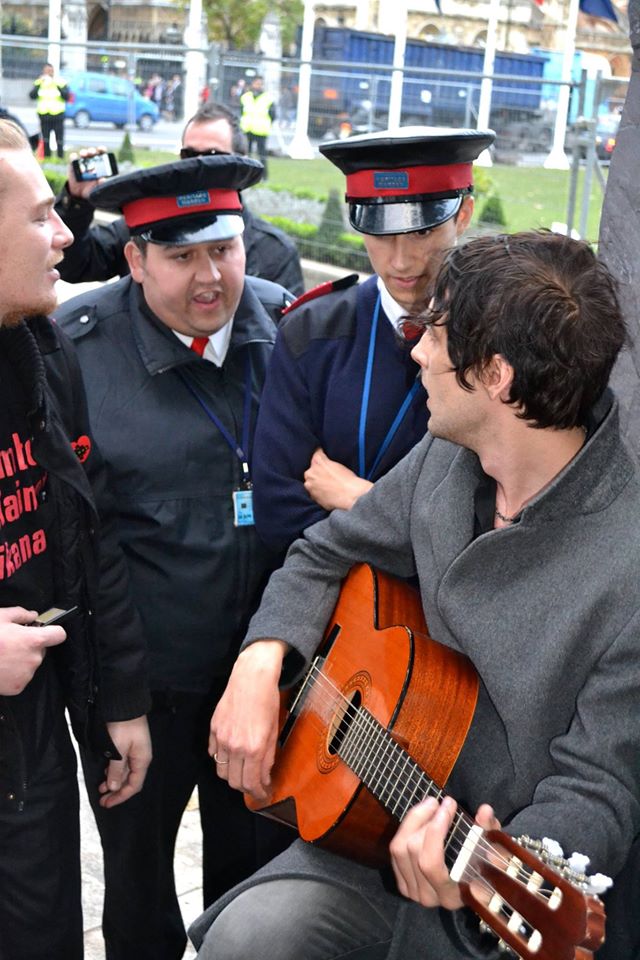 "Most of the time I deal with customer service," said the man in a Salvation Army uniform as he commanded a battalion of policemen to violently haul peaceful Occupy Democracy protesters off their illicit tarpaulin "structures".

Meet Parliament Square's chief heritage warden, Mr S. His full name is not important. He wears his uniform, I wear mine. He is a decent chap on a personal level, even a principled one. A former sapper in the Royal Engineers, he helped build roads and schools in Iraq and Afghanistan. He is now the future of policing in the threadbare patch of grass situated opposite what is laughingly referred to as democracy.

Mr S loves service, loves uniform, loves his country and loves order. Many would regard him as a heroic figure, standing against the hoards of imaginary enemies, both domestic and foreign, which are crucial to the government's legitimacy.

Mr S faced unwarranted abuse in the line of duty as Heritage Warden. His lip was cut when someone hit him in the face, although it turned out that this was an accident. Someone had uploaded his photo to Twitter calling him a child molester and others have engaged in bullying about his weight. But most ignored him.

He works for AOS, a private security firm contracted by the Greater London Authority (GLA) to enforce the most draconian policing the motherfucker of democracies has ever witnessed. When a bye-law was infringed, Mr S would warn the offender. If the offence continued, the police would step in to put enforce Mr S's words, occasionally with a well-aimed fist.

Incidents included a man playing an acoustic guitar and singing a song about trees. Mr S delivered the warning and on being ignored by the guitarist as he finished his song, the warden went into conference with the police to discuss which legislation could be applied to criminalise music. Did the bye-laws or the Police Reform and Social Responsibility Act (PRSA) apply to the guitar, the woman accompanying him with a melodica (unauthorised amplified sound) or the general melodic feeling imparted to the audience of half a dozen?

Mr S was not without sympathy for the cause. He felt very moved by some protesters, particularly one woman who was dragged by police across Parliament Square while sobbing. "I admire her for the strength of her opinions," said Mr S. "But the law is the law." He had ordered the police to pounce on the woman.

Justifying his role, Mr S insisted he is a family man with a mortgage to pay and that he is "only obeying orders". On this basis, he justifies the enforcement of the most obscenely petty rules governing Parliament Square.

It was not just Mr S who was doing his duty. When asked whether the bored looking policemen guarding fences would like to be somewhere else, a light-hearted police liaison officer chirped: "This is the job they have been given by the chain of command." All individuality and moral conscience has been extinguished in the service to the state machinery. It doesn't matter that human rights were being trampled into the grass and mud or that the rules were blatantly absurd, all that matters is duty. As members of this expedient law enforcement mechanism, they no longer matter as individuals. And if one removed himself, another would fill his place.

Hannah Arendt dubbed this the "banality of evil" following her interviews with Adolf Eichmann in an attempt to understand the motivations of Nazi war criminals. By calling a crime against humanity "banal", she was pointing to the way in which the crime had become accepted, routinised, and implemented without moral revulsion, political indignation or resistance.

The failure to think is genocidal. The failure to take accountability for our actions, even within a hierarchy such as the police or a privately contracted police operation, is tyrannical. Eichmann himself claimed that while implementing the Final Solution, he was merely acting on duty and twisted his reasoning and Kant's categorical imperative to justify it as a moral act.

Arendt's indictment of Eichmann was an indictment of society in general, where oppression is acceptable, a noxious set of laws is obeyed and enforced and all that matters is obedience with no critical distance from authority.

That's not to say Parliament Square's heritage wardens are ideological Nazis that would send Jews to the gas chambers, nor that the ridiculous bye-laws are equivalent of the Nuremberg Laws. But the line of thinking is the same. Ethics and reasoning are no longer relevant. All that matters is duty. As a result, within the manicured and exclusive grounds of Parliament Square we have fertile soil for tyranny.

Mr S and his colleagues are not the sole problem. The problem exists in the institution that the Occupy Democracy campaign was attempting to lobby, an institution that - like the police - was established to protect the ruling class against the interests of the masses. On the other side of the road, the sentiment was largely in favour of harder policing.

In a debate on the Occupy protest, that august feudal institution renowned for brazen corruption, the House of Lords, ignored the appeals for greater parliamentary accountability and focused on policing. Home Office Parliamentary Under-Secretary of State Lord Bates voiced horror at the potential for a protest to "get out of hand" and pose a "risk to the public" when it "begins at 50, grows to 100, and then grows overnight to 150."

"Proportionate policing" required one cop for up to two protesters, "just in case" - of what? There was less violence and civil unrest at the Occupy protest than there is on a Wednesday night in a Surrey market town. Is national security so delicate that the order of things could be destroyed by cutting a piece of string (criminal damage) or giving someone refreshments (obstruction of police)?Donnachadh McCarthy, the former Deputy Chair of the Liberal Democrats and columnist for The Independent, who was campaigning for better police pay and pensions. Not exactly an anarchist.


One wonders what the honourable Lord Bates thinks should be the proportionate response to a demonstration on a scale of the Hong Kong protests - probably less "light touch" than the Chinese Communist regime.

But apart from the Green Party's Baroness Jones, who was smacked in the face by the hand of firm government for having the audacity to attempt to give a protester a bottle of water, the Lords were unanimous in their desire to close down any protest the government could not limit, control and shut down - no matter how peaceful. (Readers will be glad to know that, as a member of this privileged feudal club, Jones was released without charge - others were thrown in a cell at Charing Cross Police Station)

After congratulating the police, Tebbit said: "The easiest way to reduce the manpower required be for these objectionable people to cease their objectionable claim to occupy part of what is public land." (Public land that is now under the purview of glorified bouncers)

The debate concluded with Labour's Lord West of Spithead indicating that running over the demonstrators with a car could be a reasonable response: "when I was being driven past in my car in my full uniform, they came and stood in front of the car and I managed to stop an incident because my Royal Marine driver said, “Shall I re-educate them, sir?” and I said, “Not today”."

The sentiment in the House of Lords is that repression is the best treatment the unarmed, peaceful Occupy protesters could get and that it would be better they were removed by force. Parliament has declared war on peaceful protest.

If we are not at the point of having a police state, then we will very soon be there. We can see it building: the rising xenophobia and intolerance, the misery of austerity and the public acceptance of intrusive repressive measures based on the insidious notion of "war on terror". These are dangerous times.

How do we defeat this monster?