remi was killed by the french police last week , on friday this happened at the french embassy. 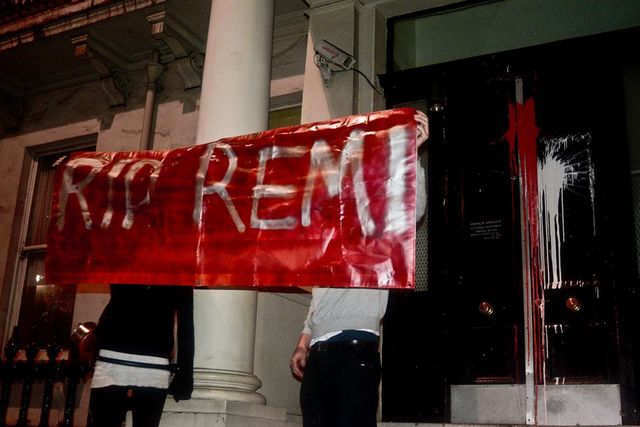 outside the french embassy

No justice No peace, for Rémi Fraisse killed by the French State

In the early morning on the 26th of October, Rémi Fraisse was killed by mobile gendarmeries at a protest site in Testet, South-west France. He was there with over 7,000 others trying to stop the construction of a dam in an area of wetland and forest with over 93 protected species. He was killed by an explosive crowd control weapon shot by the police.

Here in the UK we have a long history of murders by the police, from the murder of Mark Duggan in 2011, which sparked riots across the country, to Olaseni Lewis who was killed by police restraint in a psychiatric hospital in 2010 to Ian Tomlinson killed at the 2009 G-20 protests for being in the wrong place at the wrong time, to Blair Peach killed at an anti fascist demonstration in 1979, and on and on. The police everywhere are the same in the sense that they do not protect the interests of the people rather the interests of the state, which all too often are racist, classist, profit-driven, and intent on crushing anyone who questions them.

We are talking here about not only about a murder by the police but a murder committed by the French government. They must be held accountable.

The Testet dam project is a state battle for money and power, and here we have seen first hand that greed kills. Normally it kills those far away from view—the marginalised, the poor, the oppressed in other nations—but not in this case. Corporate greed has killed a 21-year-old French student.

We write this from London, the geo-capital of greed and concrete, where the only wetland left is consecrated in a museum. In the shadow of billionaires, many of us struggle daily merely to put rooves over our heads. Around us, we watch poverty rising, the targeting of those who have no papers, and the increased militarization of a surveillance state designed to protect the rich and powerful. We are inspired by the ambition, diversity of tactics and the determination of struggles like the ZAD in Testet.

All our struggles are connected, whether you are occupying a treehouse in Testet or occupying a London Council Office demanding that a group of homeless mothers have access to housing. Whether you are rioting in the streets of Athens or in Ferguson, the systematic root of our discontents are the same.

For all those killed by state oppression,
now, we organise.