One Feeds Two is a new food initiative supported by Sir Richard Branson. As food companies partner with One Feeds Two, each meal they sell signifies a school meal will be donated to a child in a poverty stricken country. This allows the child to go to school and not have to work just to survive. This means that the child will help raise themselves, their families and their communities out of poverty. 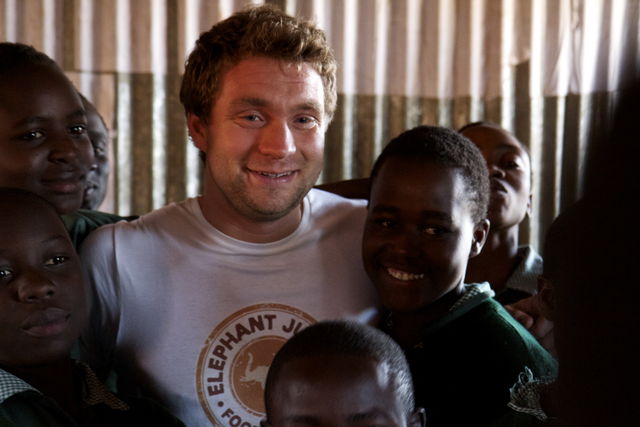 Food shouldn’t just taste good, it should do good! Launching this month, global initiative One Feeds Two is looking to reshape the food and charity industries, challenging businesses and suppliers everywhere to adopt a ‘buy one give one’ model when selling food and in turn, help children at threat from hunger. For every purchase of a product or meal carrying the One Feeds Two logo, a child in poverty will be fed with a school meal.

One Feeds Two is being praised by Sir Richard Branson for inviting the food industry to unite around a common purpose that will help to make a difference to children’s lives. With 61 million children globally missing out on school due to poverty and hunger and 66 million children attending school hungry in the developing world, One Feeds Two is helping provide school meals to the world’s poorest children to address this social problem. Rola Wala in Leeds was first to introduce One Feeds Two products at the beginning of October, followed by national food brand COOK, who are launching with their Christmas range on October 15th. They will provide a school meal per portion sold on select Christmas products that carry the One Feeds Two logo.

One Feeds Two brings together food companies, feeding charities and consumers to give nutritious school meals to children living in some of the poorest countries in the world. The school meals will help these children attend school and gain an education rather than working or scavenging for food. One Feeds Two is looking to roll out across restaurants, fast food operators, cafes, supermarkets, online retailers, caterers, educational institutions and other food purveyors.

On founding One Feeds Two, JP Campbell said: "Originally, I was inspired by Toms and what they had done with shoes and the 'buy one, give one' model. I founded The Elephant Juice Food Co. on the promise of One Feeds Two and after visiting feeding programs in Kenya realised that to make real impact on the problem of child hunger I would have to invite other businesses to adopt the concept too. Believing that business can be a real force for good, I want to create a lasting positive change in the industry. We have set up the One Feeds Two Foundation to make it really simple and easy for every food company, big or small, to adopt One Feeds Two. It’s all about providing school meals to the world’s poorest children to allow them to access education.”

Sir Richard Branson commented on the launch of One Feeds Two: “The simple idea that every time you sell a food product or meal you can give a school meal to a child living in poverty is a great example of using business for good. What better way to tackle one of the world’s biggest problems than by uniting an industry around a common purpose that will help to make a difference to children’s lives.”

Co-founded by food entrepreneur and Virgin Unite mentor Mark Christophers and former CEO of the Branson Centre of Entrepreneurship Owen Burton , JP Campbell has brought One Feeds Two to life, championing real change in the food industry. Last year JP’s company The Elephant Juice Food Co was recognised by Virgin Unites Screw Business as Usual competition for its ethically minded and passionately driven One Feeds Two model. It provided 37,500 school meals to children living in the World’s poorest countries in its first 16 months of trade. Wanting to scale the impact of One Feeds Two, JP was introduced to Mark and Owen by Virgin Unite. The trio, with their knowledge and experience of the food industry, started thinking about charity from a consumer and food company perspective and realised it was time to invite all other food companies to adopt the concept and went about setting up the Foundation to make it simple and easy for all food companies to sign up to One Feeds Two.

We are hoping that COOK will provide nearly 200,000 school meals through One Feeds Two and its Christmas range. Rola Wala, the first adopter, has already provided 36,000 meals through their street food operation, and with their first permanent site opening on the 13 October in Leeds Trinity Kitchen that number should significantly increase. It’s a start and One Feeds Two are now asking many more food brands and consumers to support their movement for happier meals and start making an instant impact on child hunger. To sign up to the One Feeds Two movement, visit www.onefeedstwo.org.