We are in Suruc-Kobane right now and we are sharing our information and observations in here. We will be here for one week and we will keep informing you day by day. 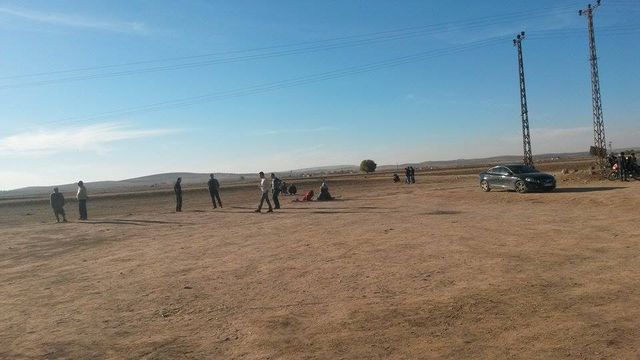 We, to be in solidarity with Kobane as Istanbul Anarsi Inisiyatifi and Karakok Otonom, took the road to Suruc from Istanbul on friday. Because the plane tickets were too expensive, we preferred to go by bus. As we got off the bus in Aligel village at about 8 am, we changed to another bus to Suruc. In the village, Turkish soldiers staying on alert like occupation forces and riot control vehicles (TOMA, akrep) are confronted everywhere. First we went to the town hall and conversed with municipality officers. Then, one of them took us to his house to have breakfast. He and his family have provided their house as shelter for about 40 people from Kobane.
After breakfast, we found a car to Mahşer village opposite Kobane and arrived there. A plain lowland, red earth and Kobane with the colour grey fronted us. Peasants and people from Kobane, people who don’t know each other, are greeting, asking “have you eaten anything?”, sharing cigarettes with each other and us as all were compaions for years. We left our stuff into the condolence house and the mosque courtyard which both are used for living places. Everyone in the village are watching over Kobane with their binoculars all day. At the top of the mosque, the families, relatives, and friends of people who fight in Kobane are looking nervously towards Kobane. We see in here, relations between men and women are much more overstepped than they are in the “modern cities”. Everyone can chat with each other without hesitation. We see in here, agism does not exist here. Everyone lives in solidarity and everyone is considered as a part of the solidarity. As soon as we arrived we searched for people who are in charge in order to learn how can we help but we haven’t seen them yet. We are here for a short period; therefore, we are going to try to participate in every kind of work.
Considering the breaking news, Kobane was bombed a couple of times this morning at about 5 by coalition forces from air. Mürşidpınar border gate was bombed twice at about 1.30 pm by the coalition forces. Now it appears to be calm and quiet. We heard that the clashes get more critical at night. We will wait and see. We heard that the mortal remain of Kader, who was murdered by the soldiers two days ago, was sent to Istanbul. This is all for now, we will inform you again.
NOTE 1: A animal freedom activist friend of us will share her observations of what animals in here have been through in a couple of days.(“the secret victims of the war”)
NOTE 2: We, Karakök Otonom and İstanbul Anarşi İnisiyatifi will share their observations in Suruç day by day for one week. In 15th of November we will broadcast an interview from the area.
İstanbul Anarşi İnisiyatifi
Karakök Otonomu