G20 resistance all but evaporates in Brisbane heatwave.

Policing for the G20 summit in Brisbane this past weekend was of overkill proportions. There was very little in the way of serious resistance, the Guardian reported that cops (6,000) outnumbered protesters and only 14 arrests were made. One of these was Manning and Assange solidarity activist Ciaron O'Reilly, who has been held in custody all weekend and will be brought before Brisbane Magistrates on Monday morning. 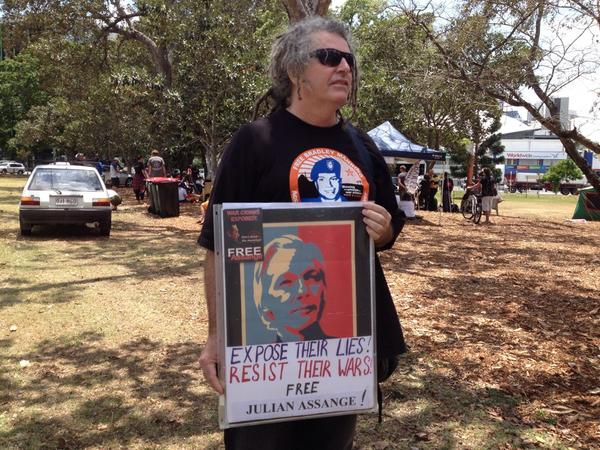 vigil for Julian Assange prior to G20 summit 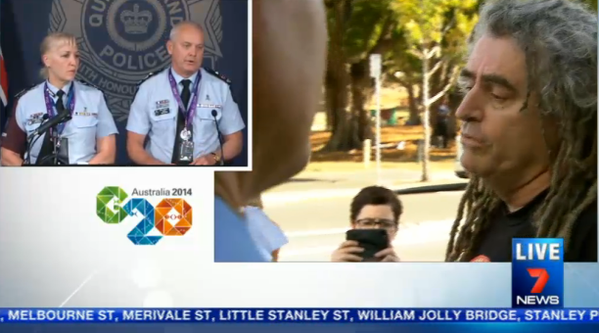 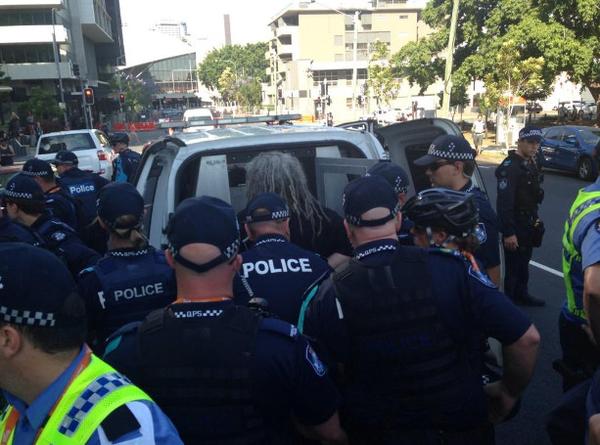 Read the original article at wiseupaction.info.

After being served with a Prohibited Person Notice by the police earlier in the week, possibly for promising to nonviolently confront President Obama over his persecution of Julian Assange and Chelsea Manning, Ciaron was back with his placard in the 'exclusion zone' around the Brisbane G20 summit Saturday and was arrested.

As he was being surrounded and pushed back by police, Ciaron referred to how wars are fought on lies and said that

If we began telling the truth, maybe we could stop war.

Ciaron is due to appear in court on Monday morning, presumably on a charge connected with breaching the Prohibited Person Notice issued under the G20 (Safety and Security) Act 2013.

When your civil liberties are curtailed by such legislation, do you roll over and submit or do you stand up and resist? There were over 1,000 arrests at the 2010 G20 in Toronto; in preparation for Brisbane 2014 the Queensland courts had arranged for day and night court hearings over the weekend complete with livestream. However, with just 14 arrests in total, it seems most folk rolled over or simply stayed away from the G20 this time.

All the more important, then, to support those few now facing the courts for resisting the removal of basic freedoms.

Ciaron was freed on bail this morning after appearing before Brisbane magistrates.
Next court hearing 4 December.