Statement from the anti-Nato protestors who were charged during the occupation of Barclays Bank in Newport. 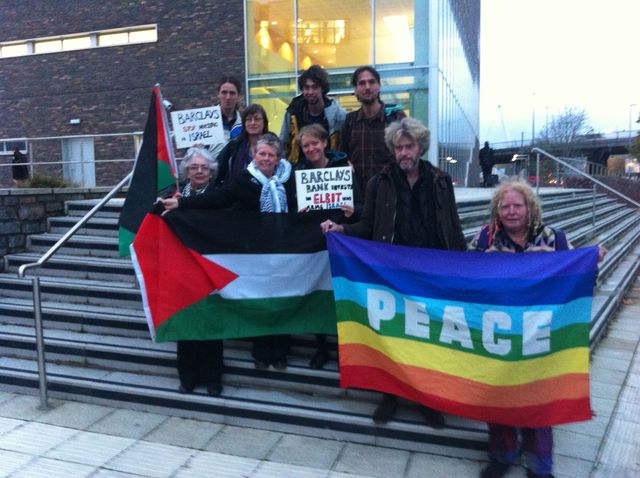 At the time of the Nato summit in September, we were among about 20 activists who occupied Barclays Bank in Newport to protest against the bank's investment in Elbit Systems[1]. We held up banners, chanted, sang and stuffed our ‘Boycott Barclays’ leaflets in between the mortgage application forms and cash slips. The bank was briefly closed for business.

The police moved in and four of us refused to leave, which was apparently enough to charge us with a crime[2]. But as we learned last week, it wasn't enough for us to be convicted.

Last Monday, we walked free from court[3]. For two of us, the case collapsed because the judge agreed we couldn’t have left without taking the desk to which we’d superglued ourselves. The other two members of the group told the court that being asked to leave did not amount to a police direction. The judge reluctantly agreed. He scolded the police and ruled that since we were not told but asked, there was no crime in refusing.

We had occupied the bank to draw attention to Barclays’ links with Elbit and to put pressure on the bank itself, its customers and staff to break the link. Elbit is Israel's largest military company, a leading drone provider and a major supplier to the IDF. Barclays holds nearly $3 million of Elbit shares.

At the time of Israel’s onslaught on Gaza in the summer, Elbit’s drones and other military equipment were used extensively. The result was devastation, tens of thousands injured, traumatised, internally displaced, made homeless, and with livelihoods destroyed. More than 2,000 people lost their lives. Nearly 500 children were among them.

Even the normally cautious officials from the UN and other international organisations spoke of war crimes carried out by Israel[4].

Can those that fund the companies which make and sell the weapons used to carry out the crimes disclaim responsibility for what will happen further down the line? We think they can’t, and we believe that Barclays’ customers would think they can’t. We know that Gazan students think they can’t: in October, they put out a call for fellow students around the world to take their money out of Barclays until it stops bankrolling Israel’s war crimes[5].

Apparently, Barclays (officially) agrees that funding war crimes is an act with moral repercussions. It even has a policy which says that it will only very carefully invest in the 'defence' industry, and only when it can be sure that what it funds will not be used by foreign authorities 'either to oppress their own populations or to support unjustified external aggression'. With Elbit we can be quite sure that Barclays can’t be sure of this.

But Barclays has a get-out clause. It claims to hold some shares in Elbit on behalf of customers and some to hedge exposure. So it buys the shares with one hand, as requested by its customers, and with the other, waves about the policy which says it cannot buy the shares.

So it's OK, apparently, and fully in accordance with the policy, to pass on money in your own name and invest it in equipment which will then be 'used by foreign authorities' both to 'oppress their own populations' and to 'support unjustified external aggression'.

It’s OK, apparently, for Barclays Bank to make a profit from the act of sending money (on behalf of customers) to Elbit Systems, even if it knows that Elbit uses it to make more weapons to be sold on to the IDF, and the IDF deploys the weapons for its war crimes (and then buys more).

It’s OK, apparently, to do so even if those terrorised - the victims of the war crimes – have requested that you don’t.

Of course, Barclays has a history. Built up from profits from the slave trade[6], the bank was famous for continuing to support the apartheid regime in South Africa long after other companies had divested. And it was only after 16 years of publicising, lobbying, protesting, occupying, and disrupting ‘normal business’ that Barclays was persuaded to withdraw support for a regime that had been condemned across the globe for international crimes.

We hope it will not take 16 years for Barclays to remove support for Israel’s crimes against the Palestinians. But we intend to follow the example of the activists of 40 years ago until it does.
--------
BOYCOTT BARCLAYS