On Saturday 29th November a shower of fascists held a solidarity demonstration outside the Greek embassy in West London. 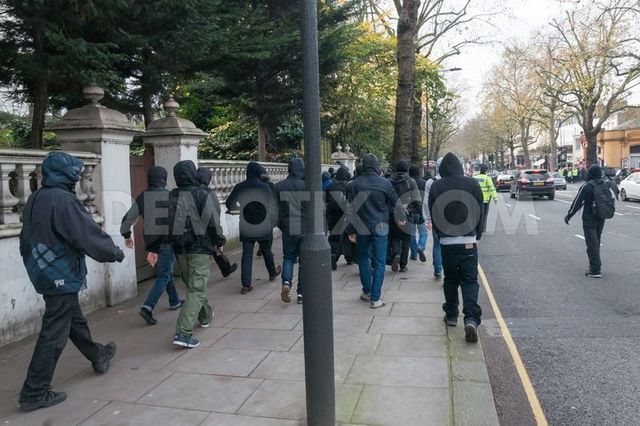 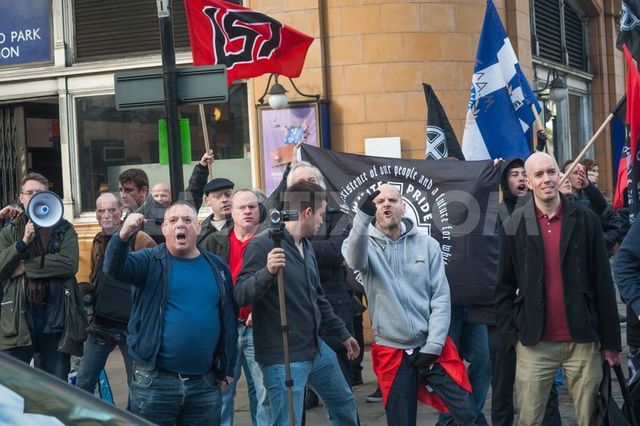 where fascists stand behind cops and give it the big 'un. 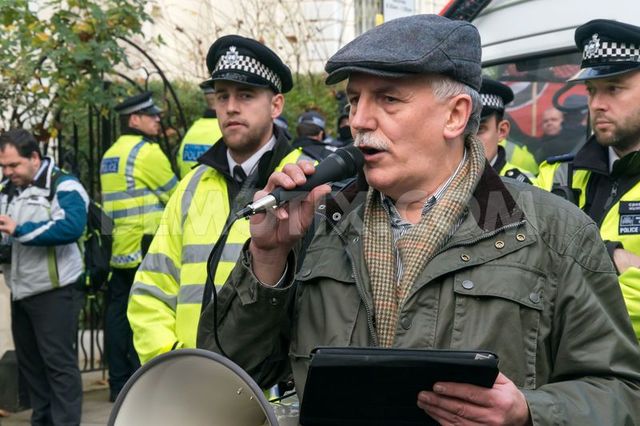 As with last year's very similar demo, the outing was once again organised by haggard non-entities Piers Mellor and Eddie Stampton under the banner of New Dawn (basically Golden Dawn's UK fanclub). In response Unite Against Fascism (UAF) called a counter demo, which was supported by North London Antifa and the Antifascist Network.

Outside the embassy two small pens had been erected and there was a significant police presence. UAF set up shop in one pen at 11am and waited for the fash to arrive, meanwhile about 20-30 antifascists loitered around Holland Park tube station. After a bit of pressure from the police, the majority of this group withdrew to the corner of Holland Park and Holland Park Avenue where they could watch the station without picking up needless arrests.

At about 12.15pm the bulk of the New Dawn demo (about 35 boneheads) was spotted at Holland Park station. The assorted antifa mobbed up on the corner and prepared to block the road, however it soon became clear the fash were in no hurry to come meet them. Taking the initiative, the slightly outnumbered antifascists decided to head to the station to discuss the finer points of radical nationalism and third position politics.

Despite the obligatory wobbly armed “come on then!” and macho posturing New Dawn were clearly happy to stay resolutely on their side of the road and allow the police and traffic to do the job of protecting them. Ultimately the exchange of views remained a verbal one and as police reinforcements began arriving, and after a few attempted forays onto the north side of Holland Park Ave, antifascists headed back to their corner.

Given the resistance, police decided to herd the fascists the long way round via Abbotsbury Rd so antifa headed up Holland Park in an attempt to cut them off. Unfortunately a hastily organised cordon outside the embassy halted the bloc and, with the added protection of another line of TSG and a few vans, New Dawn eventually made it to their allotted pen.

The entertainment then consisted of a few terrible speeches from the usual suspects – Larry Nunn, Kevin “too shit for the BNP” Layzell, Peter Rushton and someone from polish fascists Narodowe Odrodzenie Polski (NOP). The afternoon was then rounded off with some hilariously bad fascist music played on an equally bad sound-system. Police then marched the fascists back to Holland Park tube and allowed them to disperse. Unfortunately, presumably through boredom, the majority of autonomous antifascists had melted away by this point and small groups of fash were able to wander off unopposed.


Overall the fascists failed to build on last years demo, managing 41 by my count. Apart from the slightly early exit by some, it would be difficult to find fault with antifascists on the day. The UAF remained outside the embassy throughout while others attempted to confront New Dawn at any opportunity. Long term however it ought to be practically impossible for openly fascist, violent groups to organise in the UK.