17 Dec: Noise Demo at US Embassy on Chelsea Manning's Birthday

On 17th December 2014, Welsh-American whistleblower and prisoner of conscience Chelsea Manning will celebrate her 27th birthday, her fifth while incarcerated by the US government. Today in the news we have had mainstream confirmation of the CIA torture program.

This torture took place in what have become known as CIA 'Black Sites' across the world. Let's not forget that that we only know about this because of whistleblowers like Chelsea Manning, John Kiriakou, Craig Murray and WikiLeaks publisher Julian Assange, all of whom made significant sacrifices to get this information to us and have suffered persecution for doing so.

NOISE DEMO for whistleblowers and against torture, 4.30 - 6pm, Wed 17 December, outside the US Embassy, London 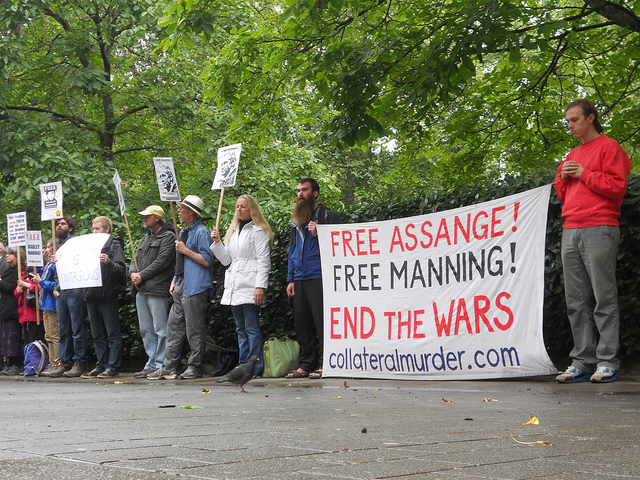 US military intelligence analyst Chelsea Manning both revealed and was subjected to torture by the US and is now serving 35 years in a military jail. John Kiriakou is the only CIA agent prosecuted over torture - for exposing it - and is serving a 30 month prison sentence in the US for doing so. Craig Murray, a former UK ambassador, was persecuted for revealing how the CIA was sending people to Uzbekistan to be tortured and that both the UK and US were making use of information gained by torture. Julian Assange became a CIA target and subject of a US Grand Jury after exposing via WikiLeaks many US crimes including torture, has been deprived of his liberty for four years and denied his right to travel in order to take up the political asylum he has been granted by Ecuador.

On Wednesday 17th December vigils and demonstrations will be held in many countries in support of Chelsea Manning on her birthday.

In London at 2.30 - 4pm, there will be a silent vigil on the steps of St Martin-in-the-Fields Church, Trafalgar Square.

Join us for a Noise Demo at the US Embassy

At 4.30pm, the Solidarity Collective will be holding a noise demo in support of Chelsea Manning, Julian Assange, WikiLeaks and all whistleblowers outside the US Embassy, 24 Grosvenor Square, London W1A 2LQ.

Come along, make a noise, and show your solidarity with persecuted whistleblowers and your opposition to torture everywhere. The soundtrack of Collateral Murder will be played during the demo, confronting the US with the reality of atrocities perpetrated in its name and for which no one has been brought to justice. 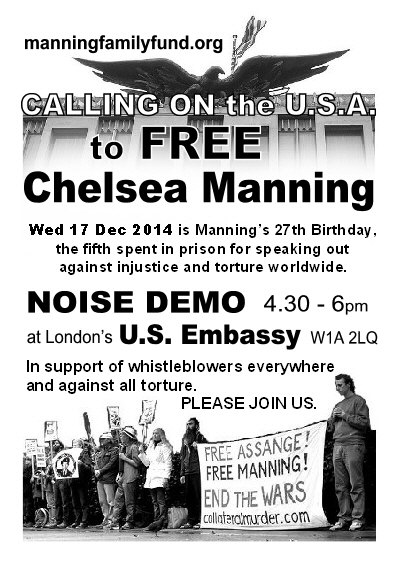