Over 50 people attended the Vigil to celebrate Chelsea Manning’s birthday in London on Wednesday afternoon.
The event was part of an international day of events demanding to free one of the world best known whistleblower.
The vigil, organised by Queer Strike and Payday men’s network was one of the actions taken place in 12 cities – from Dublin to Istanbul, Boston to Rome. 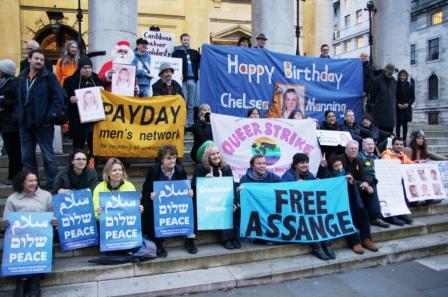 Chelsea Manning’s supporters from lgbtq, women, anti-war, anti-racist, anti-zionist, whistleblowers and other movements for change from 12 cities in seven countries are calling for her release on her birthday.

Join/visit the vigil in London on Wednesday 17 December from 2.30 to 4pm on the steps of St Martin-in-the-Fields, Trafalgar Square.

Chelsea Manning, who is 27 this week, has become one of the world’s best-known whistleblowers. She is the transgender US soldier, Grand Marshal of San Francisco Gay Pride 2014, who revealed war crimes and corruption by the US, UK and other governments. She leaked hundreds of thousands of documents to Wikileaks exposing the truth, and therefore saving many lives. Imprisoned in 2010 and held for months under torturous conditions, she was sentenced to 35 years in August 2013. If the sentence stands, she will be out in 2045. We cannot allow this, we have to get her out.

Chelsea has made it possible for the public to finally know about: the “collateral murder” video of a US helicopter crew killing Iraqi civilianslthe cover-up of rape in Iraq & Afghanistanl the secret use of drones for extra-judicial killing lUS dirty tricks in Haiti, Venezuela, Peru & elsewhere l Egyptian and Palestinian Authority collusion with Israel’s bombing of Gaza . . .and much more.

In a recent public statement, Chelsea drew out the connection between her battle for transgender rights and recent struggles for immigration reform in the US and battles for justice against police officers killing of unarmed people of colour like Michael Brown in Ferguson and Eric Garner in New York.

As Chelsea is preparing her appeal in 2015, the campaign to free her has gained a new momentum. Amnesty International is circulating a petition and pressure on the Department of Defense are requesting clemency from President Obama are flowing from various quarters of society. The National Union of Journalists in the UK is publicising the events on their website and the Guardian published a letter on 12 December announcing the events. In a statement, Vivienne Westwood has written: “We love you, Chelsea. We are the Revolution!”

Daniel Ellsberg, Pentagon papers whistleblower, who will attend the event in San Francisco, has stated: “Without the example of Chelsea Manning, both her disclosures and her treatment by the Injustice System, we probably would not have the revelations of Ed Snowden."
Didi Rossi from Queer Strike, which is jointly organising the London vigil, said “Chelsea is our lgbtq anti-war whistleblower heroine. Her disclosures have strengthened and protected people from all backgrounds and communities internationally. We have benefitted from her whistleblowing and we all have a responsibility to get her out.”

For Giorgio Riva from Payday, also jointly organising the London vigil, “Chelsea’s action has inspired a new movement of whistleblowers, with people like Edward Snowden, but also thousands of lesser known people working in institutions of all types. The authorities hope to make an example of Chelsea in an attempt to hinder a now unstoppable movement.”