Six Catholic Workers blockaded the main gate of Northwood Military HQ this morning for one hour, marking the day when Christians remember the massacre of the Holy Innocents by King Herod. 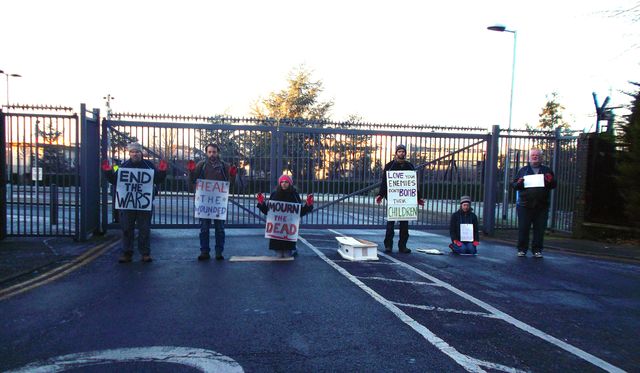 Six Catholic Workers blockaded the main gate of Northwood military Headquarters this morning, marking Holy innocents day when Christians remember the innocent children who were massacred by King Herod to protect his power. The protestors were holding placards which said “Love your enemies, don’t kill their children”, among others. The blockaders had red paint on their hands to symbolise our complicity in the deaths of innocent victims of UK wars. Names of those who have died in British wars were read out, and prayers for peace and justice were said. As a result of the blockade, traffic was prevented from entering and leaving, disrupting the operation of the base. The blockade was sustained for an hour. There were no arrests.

Catholic Workers have been organising regular acts of witness at Northwood HQ for thirteen years. The Northwood HQ is a nerve centre for British military operations around the world. As the Permanent Joint Forces HQ it is the command and control centre for army, navy, air force, special forces and Trident nuclear submarines. The base also hosts EU and NATO headquarters.

As a central point in the projection of British military force around the world Northwood HQ continues to victimise the innocent to protect British power and status as Herod’s operatives did in biblical times.

Today’s act of witness followed the Annual Faith and Resistance retreat at the Catholic Worker Farm, at which Catholic Workers and friends reflect on how God is calling us to side with the innocent victims of violence and injustice today.