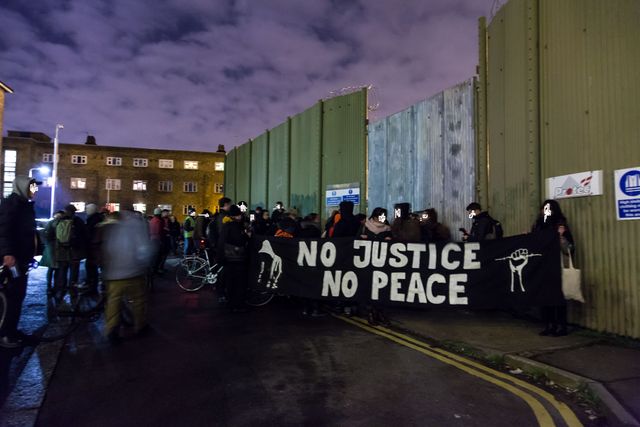 No Justice No Peace 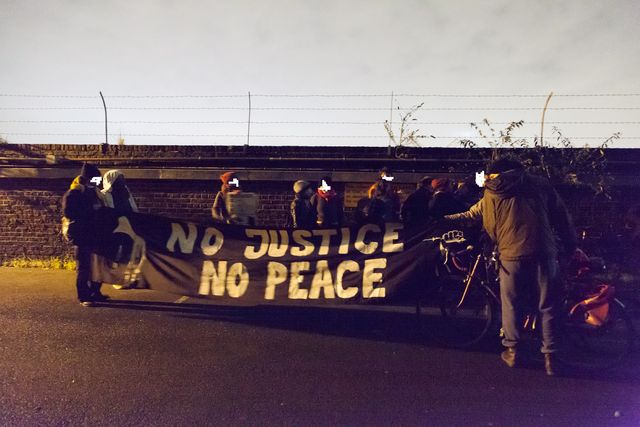 No Justice Just Us 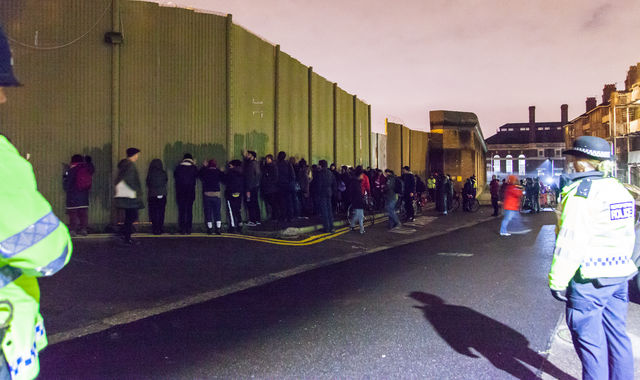 Having spent a very quiet Christmas I decided I needed to get out for a bit. I was nursing a slight case of whip lash (long story) and suffering a bout of shakes from another ongoing “thing”. I had been told about a vigil demo type event happening at Brixton Prison. Curious to see what it was about, I decided to grab my camera and jump on a bus.

When I arrived the was around 2 dozen people gathered down a dark Jebb Ave. this swelled to around 45 people at its peak including people with a large banner reading “no justice no peace belonging to the @blacbanner collective”.

Once every one had arrived a loud hailer crackled to life and a man read off a selection of people who had died in custody in prisons immigration centres & police stations. After a short reading the gathered crowd a number of which had brought whistles pots pans drums and other noise making devices began making cheering making noise and wishing the inmates a happy new year at this point it was decided to continue this well wishing on the move whilst waking around the prison.

A couple of hundred meters round the corner the crowd came upon a section of corrugated iron covering the prison fence and began banging away blowing their whistles and shouting well wishes to the prisoners on the other side which they were hearing and responding to. It was a lot of fun and I think the guys inside appreciated people on the outside turning up to wish them happy New Year. It was all very good spirited.

We were lucky enough to have Marcia Rigg-Samuel come and speak to the gathering on behalf of The United Families and Friends Campaign and about her brother Sean who died whilst in police custody.

This was all going well and the speeches finished. Everyone decided to raise a rousing final cheer for the inmates. One person let off a celebratory New Years firework. That’s when it went pear shaped. The police decided that the firework was too much and a dozen police rushed in to the crowd to detain the individual. The crowd objected to this apparent over reaction by the police and surrounded the cops who had their night sticks out. Chanting “let him go”. They seemed determined at all costs to keep hold of him.

Moments later a collection of further squad cars came hurtling in to the cul-de-sac. The “suspect” was taken to a van but the police decided that they now wanted to start arresting other people as well and around 20 officers proceeded to chase a number of people of in to the adjacent estate.

Back toward the entrance to the road around 20 police officers now formed a human chain to block exit from the area. I would say around 40 to 50 officers were involved; there were also additional vans and squad cars patrolling along the main road Brixton Hill. Later there were reports on twitter that CS spray had been used by the police whilst chasing people in the estate.

After dispersing for a while the bulk of the group headed to Brixton Police station to continue highlighting deaths in custody.

I asked an officer why so many people had been deployed for one guy letting off a small fire work on New Year’s Eve he quoted safety concerns. The mind boggles.