Since being released from gaol, Tommy Robinson AKA Stephen Yaxley Lennon has trekked across to Germany to learn from anti-immigrant fascists Pegida, his intention to clean up his beloved EDL to appeal to ageing middle class Hooray Henry's who associate Henley with Regatta snobbery rather than crappy shirts and jeans. 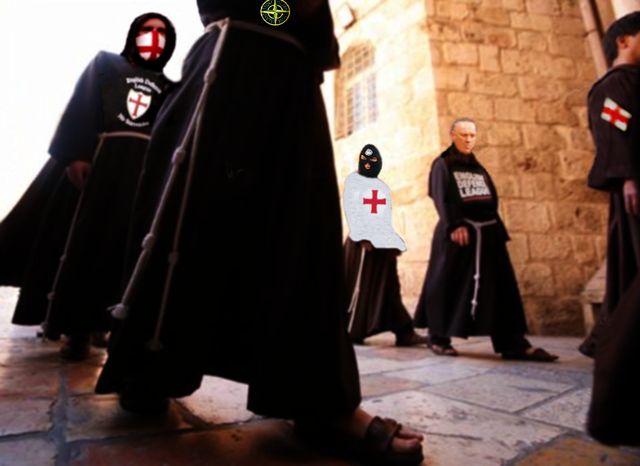 Like the Luton-based wifebeater, Pegida's founder Lutz Bachmann has a lengthy criminal record: - his crimes, drug-dealing, burglary, violence and breaking and entering, and yet, because of the quirky nature of Dresden's non-violent bigots and a sense of injustice surrounding the controversial nature of the WW2 Dresden bombings, Lutz has rallied thousands of candle-holding bigots to stand around doing nothing on chilly, frosty German Monday nights.

After snorting too much coke in one go, Tommy assumed that what passes for silent German eccentricity will translate into stiff-upper-lip English reserve. He also considered persuading EDLers to wear Lederhosen, and slap each other's legs, but this was considered far too "degenerately kinky" for Tommy's forthcoming neutered street army, bearing in mind the lingering homophobia amongst EDL footsoldiers.

Tommy will be retaking the EDL as soon as his bail ends in July, stealing the thunder from "Shitstain First" by immediately banning all un-Christian behaviour including swearing, sex, snorting coke (only permitted for EDL organisers), swigging Stella, and spitting on the street. As for hating Muslims, Tommy wants to return to the pretence of "only hating Islamic extremists", which will mean members will have to keep their sordid dreams of genocide to themselves.

Booting pirate radio ranter DJ Bossman Davey-Jay into touch, Tommy will peddle every "member" (supporter) of his politically correct nazi street army his very own creation - MIG designer label monks habits, his latest exploitation of the unlegendary Luton Town hooligan group "Men In Gear" from whom he stole his Tommy Robinson pseudonym. Secretly manufactured in some faraway Muslim country, the ISIS-black garments of his silent crusade will be essential wear for everybody "opposing Sharia law in the UK". Furthermore, all former football hooligans in the EDL ranks will be forced to watch cricket, to reclaim the once patriotic English pastime back from its non-white colonial victors.

Tommy of late, has been ranting and raving about the lack of discipline of EDL footsoldiers. Now a UKIP supporter, Yaxo supports the reintroduction of corporal as well as capital punishment. Any EDL Monks daring to sip alcohol from a can, or wolf-whistle at a passing EDL Nun (the EDL Angels), will touch their toes whilst Dave Bolton finally gets his own back for years of physical abuse by his friends by delivering six of the best with a fluffy Shrek slipper, or a rolled-up copy of the EDL's Bible the Daily Express, if they dare to fight back whilst beaten to a pulp by Antifa.

Sitting ducks for antifascist encroachments, EDL Pegida footsoldiers who shit themselves in absolute fright, won't have to worry about soiling their underwear thanks to a sponsorship endorsement by Tena. EDL Stewards will be on hand to replace soiled underwear when fascist bladders and bowels get the better of them, ensuring there won't be a repeat of the infamous Nottingham Castle Pissathon.