AN-225 Mriya: NATO tanks for Ukraine?

UkrainianArmy has been supplied with NATO military equipment 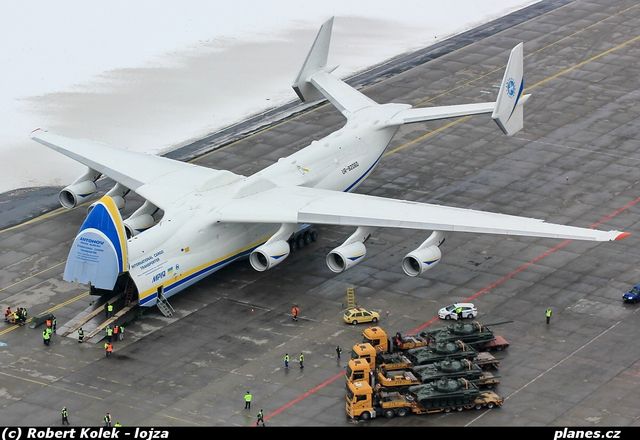 Several days have passed since the emergence of the first information on loading of the upgraded T-72A on board of the Ukrainian freighter Mriya at the Czech airport. Presently, with the mass media ado about it going down, I suggest that we should sort it out and just delve into it.

Now, on January 26 the photo from the Czech Republic Janacek airport in Ostrava appeared in Inet. It showed the loading of four T-72A repaired tanks on the Ukrainian AN-225 Mriya. According to the official version, the tanks were to be delivered to Nigeria. Nigeria’s government made the contract with the Excalibur Army company.

Despite the fact the company’s representatives rushed to refute the rumors on delivery of military equipment to Ukraine, it appears that T-72As just failed to reach their destination in Africa and “were lost” somewhere in Ukraine. Here you are with my reasons to prove it.

Firstly, according to the operating data of the freighter, its fuel burn is 15,9 tph, max cruiser speed is 850 kph and max payload is up to 250,000 kg., which means that it can’t stay in the flight mode more than 2 hours. Now, let’s start calculating. There were 4 tanks weighting 43 ton each without dynamic defense equipment and ammunition. Dynamic defense equipment, to be fitted in wake of the planned tank upgrade, approximately weights nearly 1600 kg (5,3 kg – is the weight of a separate container without holders). It’s most likely that dynamic defense equipment and other hinge equipment was loaded separately in some special package. To sum it up, we get some 178 ton (and in reality, I think, we should add couple tons more, bearing in mind the rest equipment). So, that Ukrainian freighter could stay flying for 3 hours or so on 27 January and that is not enough at all for delivery of the armor to Africa (the distance from Ostrava to Abuja, capital of Nigeria, is 4630 km and it’ll take no less than 6 hours to fly it), well, considering AN-225 made no stopovers for refueling (at least info on stopovers wasn’t available on FlightRadar site).

Secondly, there are people who witnessed AN-225 in Dnepropetrovsk on January 27.

You can see vividly on this map that distance between Ostrava and Dnepropetrovsk is 1230 km. AN-225 at its cruiser speed of 850 kph can make it for an hour and a half or so. Btw this gives you more meat for thought. I mean were those only tanks that Mriya was delivering actually? It has just flashed through my mind that the Ukrainian army needs ammunition badly, being really in acute shortage of it. It would be quite logical to suppose that all the vacant space inside that AN-225 was stuffed exactly with that sort of load. There are lots of Soviet storing facilities left in Hungary and Czech Republic with the stockpiles of rockets, shells and cartridges with bullets, and other useful things for Armed forces of Ukraine and National Guard of Ukraine.

Thirdly, there are Ukrainian soldiers voicing their joy when they get new military equipment upgraded by Czech (sic!) specialists.

Lastly, in the Inet there has appeared the document proving the version of the Nigerian mystification. This is actually the letter of the Ukrainian Defense minister Stepan Poltorak to his Czech counterpart with the gratitude for delivering of the military equipment and rendering of military and technical assistance.

Interestingly, that same Excalibur Army, which allegedly sent upgraded T-72A to Africa, is mentioned in the text.

And to top it all, the absence of the proper data on the route and the ultimate destination of UR-82060 looks very fishy. You can use FlightRadar to see it’s really so.

So it turns out to be that apart from the statements of the Czech company there are no other data on the route and air coordinates of Mriya.

Bearing in mind all the above-mentioned stuff some preliminary conclusions may be already made.

1. Europe has started/or continues shipping weapons, heavy ones in particular, to Ukraine.
2. Kyiv junta is being in despair, for it has no own military equipment left any more. They even have no armored vehicles at their disposal and the last ones have failed to reach Iraq. Ukrainian authorities are just unable to equip the freshly mobilized units with the necessary weapons.
3. Leadership of the EU and NATO has been vigorously pressing commercial structures of some European states into harmful for them cooperation with Kyiv.

That’s how it stays presently.