From information leaked we can reveal that Pegida UK’s main form of organisation has primarily taken place over the social Networking site Facebook since just under a month ago from the 2nd January 2015. 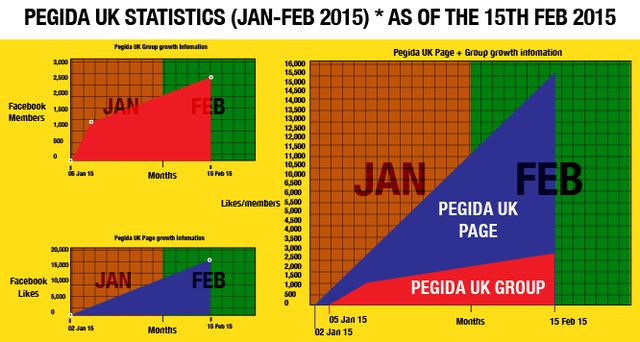 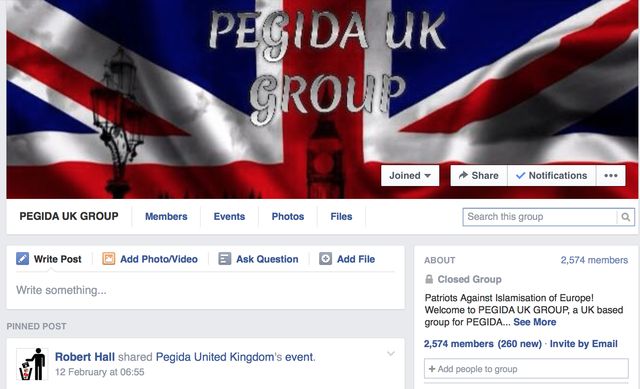 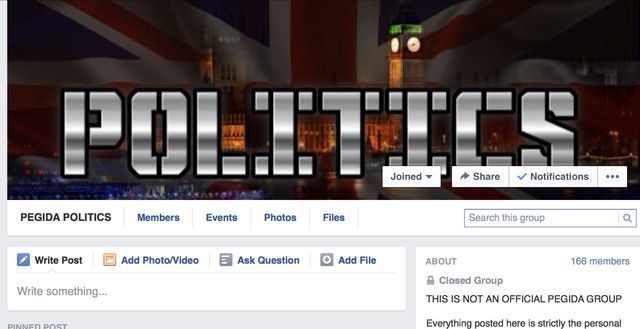 From information leaked we can reveal that Pegida UK’s main form of organisation has primarily taken place over the social Networking site Facebook since just under a month ago from the 2nd January 2015.

Pegida UK FB group was founded on the 5th of January 2015 by ‘Tom Hall’ who has stated he’s connected with Pegida Scandinavia. Tom’s profile has very little information, possible that it’s a dud account.

Pegida also has a Pegida Politics page though with less members of 200+. Both pages were made by Tom within the first week of January while the earliest post on Pegida UK’s page can be dated back to the 4th of January. At this very moment Pegida UK Page has 15,000+ likes and Pegida UK’s group page has 2,570+ members in just over a month though a lot of support is also from overseas too.

The Pegida UK group page is riddled with admins and far-right members discussing Holocaust Denial anti-Semitism and support for Adolf Hitler with phrases 14 words, 14w and 14/88 right from there earliest posts made despite later stating people to watch what they say online. Pegida UK admin and members talk about how if people see what they’re posting it would tarnish Pegida UK’s image for good. (1.1)

North East EDL Regional Organisers Steve Hewitt and ex-BNP candidate Alan Spence have been in contact with Pegida UK offering to help organise the Newcastle demo on the 28th of February 2015. Also likes of the NEI/SDL/EVF members and Prominent Neo-Nazi Eddie Stamton have also been in contact with Pegida UK since the very founding of the groups page (1.2). Also revealed is co-operation between American network Breitbart News in London which state they’re Pro-Pegida. (1.3)

Underlying reasons why Pegida UK specifically targeted Newcastle date back to as far as 2010 and 2013 when the EDL marched in Newcastle and faced very little direct opposition to as recently as the NEI demo in Washington on the 30th of January 2015. Initially most supporters and members of Pegida UK wanted to March in London though thought some said it wouldn’t get much attention. Pegida UK then decided to target northern cities such as Manchester and Newcastle where they claim they’d get more support would be a better option . (1.4)

Pegida UK organisers talk about how the EDL has been an influence to them how Pegida UK can initiate a new platform for them to grow from (1.5).

Though since then Pegida UK have tried to distance themselves from EDL members saying the EDL model is no longer working to attract the numbers they need. (1.6)

In addition origins of Pegida UK initiated not from the UK but from Pegida Scandinavia to Germany then projected onto the UK. Most if not all organisation has taken place outside Newcastle entirely if not also outside the UK. As the group page grew Tom asked for people to help organise in the UK. (1.7)

Over on the Pegida Politics page admin Doug Dalby talks about creating a virtual march and to create Pegida Scolars and Pegida Education sites. (1.8)

Contents of posts and evidence with attachments below:-

1.6) Pegida UK discuss how keep their distance from Far-right groups and the EDL