Instro Precision in Kent has been occupied since 5am this morning, for their role in repression in both Israel and Afghanistan. Instro is owned by Elbit Systems, just like the UAV Engines factory shut down in summer 2014 during Israel's "Protective Edge" assault. 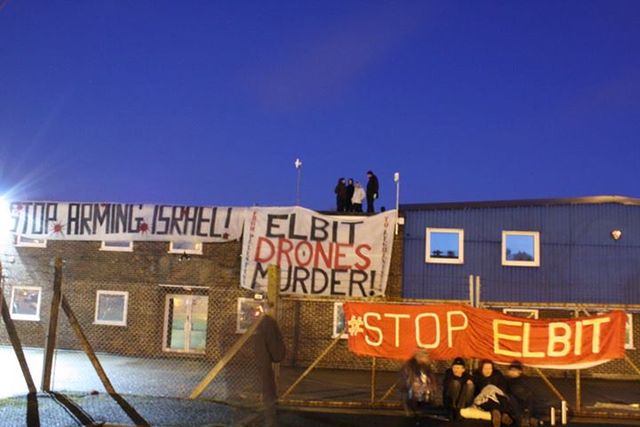 Instro Precision, an arms company near Broadstairs (Kent), was occupied at 5am this morning to protest its sales to both Israel and Afghanistan. Four people are on the roof with banners to shut the factory down, with ten more on the ground, one of whom is locked to the fence.

Instro is owned by Israeli arms company Elbit Systems, who make drones that are used to kill Palestinian civilians in Gaza. Optical and camera systems like those made at the Instro factory are also supplied by Elbit for use in drones flown over Afghanistan, as well as in Israel’s apartheid wall.

Elbit Hermes drones have been flown over Afghanistan and the new Watchkeeper drone, based on the Hermes, was deployed by the MOD last year. Although the Watchkeeper is ostensibly a surveillance drone, it has been displayed with missiles under its wings at the DSEi arms fair in London.

During last Summer’s ‘Operation Protective Edge’ attack last Summer, armed drones killed 830 Palestinians in Gaza. 85% of the drones used by the Israeli military are supplied by Elbit. Elbit’s share price rose in July off the back of the extensive use of its technology during Israel’s massacre,and the company recently reported a backlog in orders worth $6.2 billion. Elbit advertises its products as “combat proven”, by which they mean their products are tested on the bodies of Palestinian civilians.

This is the second UK-based Elbit factory to be targeted by activists, after the successful occupation last summer of a drone engine factory near Birmingham.

One of the activists, Tom Anderson, a researcher from the UK research group Corporate Watch said: “We are here because we want to stop Elbit from supplying weapons which are used to massacre people in Gaza and Afghanistan. In 2013 I visited Gaza and spoke to the survivors of Israeli drone strikes. They told me that they wanted people to take action to prevent the companies that manufactured the drones that killed their loved ones from making equipment that will cause others to suffer the way they have.”

Rida Abu Zneid, a young woman from Gaza who saw her sister ripped apart in front of her by a missile from an Israeli drone told Corporate Watch: “Why should they manufacture these weapons to kill innocent people? They should stop and close those factories. They only do it for the money. They get money and they cost our lives. If they only thought for a second about what these weapons can do they would stop. What do they feel when they see killed people on the TV? If they came over here and lived just one day in this area, and heard the bombing and the drones, what would they feel? I think they should live our experience”.

Elbit’s electronics are used in Israel’s apartheid wall, which stretches for hundreds of miles across the West Bank separating people from their loved ones, farmers from their fields and is intended to colonise more land for Israel and its settlements.

Lucy Marshall, another of the protesters said: “optical and camera systems like those manufactured at Instro Precision are supplied by Elbit for use on drones and also for camera systems on the apartheid wall. We are here to take action to prevent Israel from continuing its oppression and apartheid against the Palestinians.”

Palestinians have called on governments to impose an arms embargo on Israel, and not to buy arms from Israeli companies like Elbit. Abdulrahman Abunahel from the Palestinian Boycott, Divestment and Sanctions (BDS) movement said: “We call on governments around the world to do the very least they can to stop Israel from carrying out more massacres of our people by imposing a military embargo on Israel. Such steps would be in line with growing public support for our struggle and for the boycott, divestment and sanctions (BDS) campaign”.