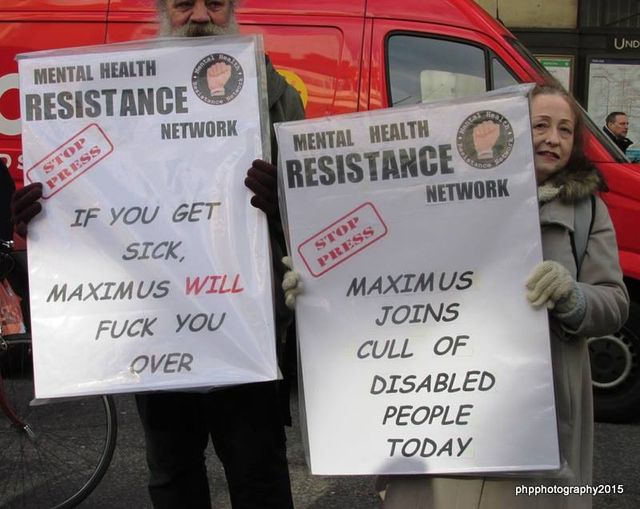 I am from the Mental Health Resistance Network and I’m going to tell you a story. One day, a friend of mine sorted out all the things that were outstanding in her life. The following morning, she left her home in London and made her way to the train station, checked the platform and times for her destination and boarded a train for Eastbourne. Once there, she asked strangers for directions to Beachy Head. She seemed calm; didn’t do anything to draw attention to herself, at least not until she threw herself over the cliff onto the rocks below. Until her body hit the rocks, she was fit for work; at least she was according to the rules of the Work Capability Assessment, because she was functioning well, sorting out her affairs, getting up early, using public transport, finding her way around in unfamiliar places and speaking to strangers.

This is the nonsense of the Work Capability Assessment and the idea that you can assess someone’s fitness to work by simply looking at how they can function in some situations sometimes. If someone is fit enough to kill themselves, then they are fit enough to work, or at least fit enough to lose their disability benefits, according to the Tories and their henchmen here at Maximus.

The Mental Health Resistance Networks demands an immediate end to the Work Capability Assessment. In a recent judicial review instigated by us, the Department for Work and Pensions fought tooth and nail against having to consider medical evidence when assessing people with mental health problems.

The original judgement, upheld at appeal, ruled that the DWP’s failure to obtain medical evidence placed people with mental health problems at a substantial disadvantage. But still we are being dragged through this cruel, mock assessment, regardless of the disadvantage proven in court and whatever the state of our mental health, an assessment that they refer to as a medical assessment.

It is no more a medical assessment than a two-line horoscope in a daily tabloid is a full psychiatric risk assessment. It is quackery, carried out by a bunch of money mad charlatans, first Atos, now Maximus; the same circus, different clowns.

Dr Bill Gunnyeon, the chief medical officer for the DWP provided most of their arguments against us in court. In one statement, he said that giving consideration to medical evidence was precisely what they were trying to get away from! It seems an unbelievable thing for him to have said, but it’s true, he said it. Gunnyeon now works for Maximus. It’s a small world isn’t it?

It’s personal for the Mental Health Resistance Network. We are being sanctioned even when we have been found not well enough to work; we are being forced onto Workfare when we are ill; we are threatened with forced treatments, treatments that can be unsafe. There is the threat from the government that people living with addictions will be forced onto 12 step programmes; to hell with the fact that this compromises the principles of attraction rather than promotion stated in the Traditions of these programmes. Just like they trashed the doctor’s Hippocratic Oath, they are ready to trash the 12 step programmes – nothing is sacred, nothing except profit.

More and more of us are being driven to suicide. Coroners have cited benefit loss as playing a part in a number of suicides. Despite requests, the government continues to refuse to release statistics for benefit related suicides.

So it is personal, it’s a witch-hunt against us; they are waging a campaign of hatred against people with mental health problems. But we will never give up fighting. So I repeat, we demand an immediate end to the WCA and we will not give up until we get this. We will fight the government and we will fight the corrupt and greedy Maximus to the end; because it is personal.

And this isn’t about saving taxpayers money; after all, the taxpayers the Tories care about don’t pay tax. They bank with HSBC and other dodgy financial institutions. And it’s not even just about forcing people to take out income protection insurance, although Unum, the insurance company that designed the WCA, is no doubt making money from it all. Certainly pretending to assess people’s fitness for work is a lucrative business too.

But, ultimately, it’s about creating a cowed and insecure workforce in Britain who will eventually be prepared to let go of all of the workers’ rights that our grandparents fought for: a workforce that has no safety net when things go wrong and is therefore vulnerable, because ‘vulnerable’ is just how big business and their Tory representatives in parliament like to keep workers; insecure, desperate and submissive.

How are these bastards getting away with it? Well, we all know that the public has been groomed for years by a propaganda machine that Goebbels would have been proud of. And we need to be tackling this machine as well as Maximus, which is the mercenary branch of the operation.

But forget the Daily Hate Mail for the moment because today is Maximus’s special day. Happy Birthday Maximus; we’re here today to let you know that we will be with you all the way. We will never leave you alone.
And we will never forget that Maximus is a very special company, renowned for disability discrimination and fraud; a member of that highly reputable industry, the financial services industry. No don’t laugh!

As long as there is a high degree of abuse within the protest movement, the issue of mental health will continue to be dealt with by the state. Casualties of activist trauma, rape and other problems must be exposed and dealt with in order for true solidarity to prevail.