Frankfurt and the flames of resistance

Issue 5 of online anarchist bulletin The Acorn has just been published and focuses on Blockupy in Frankfurt: 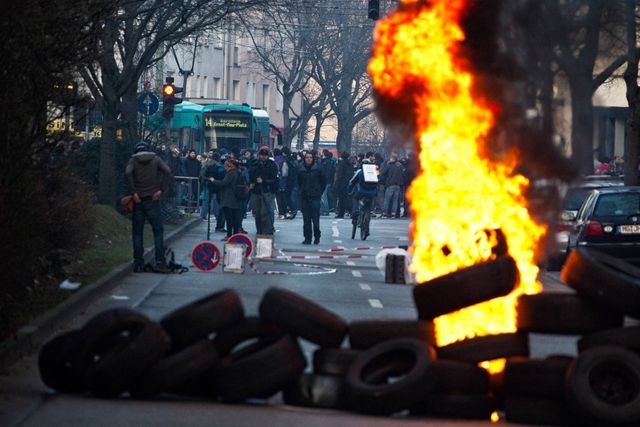 A powerful message rose from the streets of Frankfurt on Wednesday March 18 2015 – a new phase of international anti-capitalist resistance has begun.
As European Central Bank president Mario Draghi officially opened its billion-pound HQ as if nothing was happening, the city outside was like a war zone, full of razor wire and military-style police.
The successful #Blockupy gatecrashing of the Euro-bankers’ launch party started as early as 6am. Roads and bridges were blocked with burning barricades. Cop cars were torched, police covered in paint, banks and other symbols of the capitalist system attacked.
German police – 10,000 of them brought in from all over the country – were even more brutal than ever. Protesters were beaten with batons, kicked in the head, attacked with pepper spray, dragged along the ground by their hair, as well as having tear gas and water cannon fired at them as the state’s thugs tried and failed to break the spirit of defiance on the streets.
The day ended with a massive demonstration through the city centre, of some 20,000 people. Observers described it as much larger than expected and the biggest of its kind since the anti-G8 protests in Heiligendamm in 2007.
As we explained in Acorn 2 and Acorn 4, activists from all over Europe headed to the continent’s financial capital to show their anger at the ECB, the Troika and the whole neoliberal dictatorship being imposed everywhere – the Italian contingent was particularly visible, but it went deeper than that.
And it is here perhaps that the true significance of #18M can be found. Around 15 years ago, battles like those in Seattle, Genoa and the City of London marked the moment that a global anti-capitalist movement forced, by its very existence, a general recognition that we live in a capitalist society – before that, the word was regarded as some kind of propagandistic communist term to describe what used to be called “the free world”.
The phase of massive anti-summit protests came to an end, although opposition of course continued.
The authorities were no doubt hoping that the international movement would itself fade away and that radicals would retreat into the detail of their own local struggles and forget that these form part of a bigger picture.
But that hasn’t happened. The awareness of the existence of a neoliberal capitalist system has gone hand in hand with the awareness of a network of international resistance – informal but inter-connected in a myriad of ways.
Local struggles against specific examples of capitalist oppression will feed in and strengthen that resistance. And the joyful empowerment of being part of that wider resistance will in turn fortify and sustain the local struggle.
The signs are all there that we are entering a spiralling resurgence of the international anti-capitalist movement, of which Frankfurt is just the beginning.
Full issue, with photos and loads more stories at: