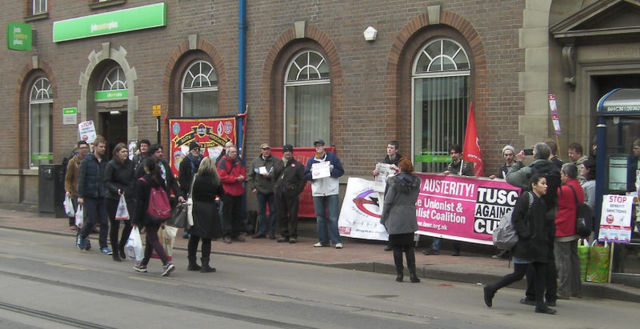 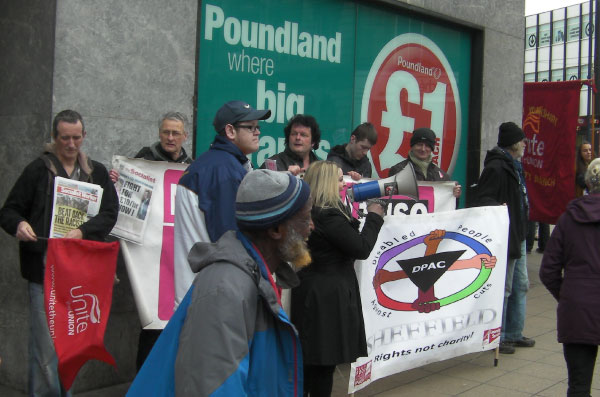 Be a Serf at Poundland on Workfare

Sanctions are killing people. The Current Welfare policy from the ConDem government is basically "Fuck off and Die"

Similar to the UK's Energy policy of "Invade and Steal" , this corrupt Corpratocracy continues on its race to neo-fudalism. We are no longer free human beings but serfs for the use of profit making global Corporations. The corporate capture of everything continues apace.

DWP and IDS assaults on the poor.Is ed Miliband any better?

This is a question that Labour needs to answer.

How many times did a Labour DWP Minister damn the claimants?

That is a long number of times.

They also lied about the law.

Not a surprise that none of the Labour Party statements about Iain Duncan smith makes any reference at all to what Labour did whilst in office.

It is thus a fair bet that if Rachel Reeves deigns to do a job as a DWOP Minister (making a lot of assumptions here) she won’t be much better than the Mersey lass Esther Mcvey.

She will do the same sort of nasty things that the Tories have been doing.
As for the legality and the illegality of the DWP, the Supreme Court judgment backing IDS cup last week shows that the Judges, the Judiciary are as Tory now as they were when JAG Griffith the late LSE Professor who wrote the ‘Politics of the Judiciary’ had been doing his evidence gathering.

The poor, the low income people are being crushed by successive British Governments.

The Courts have allowed the crushing to go on.

What we need is a real Movement of the people that can really democratically, ethically and sustainably take on the Govt and the Judiciary.

But the state we are in is a very severe one

"What we need is a real Movement of the people that can really democratically, ethically and sustainably take on the Govt and the Judiciary."

What is needed is to convince the majority of the British people to WANT the things we want. Sorry, but the move to the center of the Labour Party was a response to a shift rightward of the population in general.

In a democracy, when working properly, it is the "job" of parties to represent coalitions of interests. Not to stake out positions in the sand that no large number of people support. Democracy is NOT about making good, just, wise, etc. decisions but just the decisions that "the people" want regardless of how bad, unjust, foolish, etc. those might be in our eyes.

Our "job", if we want different decisions, is to organize and convince large numbers of people to want these different things. Once there was organized a large number of people wanting decisions farther to the left, Labour will respond by shifting back leftwards. Or else a new party would form to their left.

And how, exactly, might the move leftwards would happen?
And there being no serious concern about lack of justice, fairness etc, what would be the
rallying call for such leftwards move?
What planet do you inhabit, if it isn't too rude to ask?

Most issues that affect the minds of the chattering classes are about robbing other countries
or abusing them.

Hardly any real traction is noticed in the mainstream about day to day bread and butter experiences of most people left without the means or support top look after their basic needs.

Or to look after their loved ones.

Not for lack of trying but the institutions locally, regionally and centrally are organised by the state in a way that openly denies any social duties to support these people.

Most people in these situations are not benefit claimants or work shy or anything like that.

It is that moist people are denied basic level of income and equally basic democratic support.

A British Election does not change anything, except faces and a few PR bytes. It is most likely that this May, a UKIP-Con partnership may happen over policies that are almost entirely based on having a go at fantasy enemies.

The Media is not telling the whole truth.

None of the smaller groupings on the so0-caleld left are really getting the whole picture all the time.

You go into any areas in the deprived boroughs and you can see the extent of internecine violations, violence, aggression, brutality and denial. Deprivation taking place.

There are no laws.

No social responsibility is visible.

Most people are too scared to speak up because they know they won’t have support from the
Militants of the left.

The left only show up at show demos.

They are as alien in those communities as any ordinary decent persons.

The outlook left is gloomy.

'Freedom' in Classical Liberalism and in Neoliberalism.

Only thing I would add, putting on my cultural studies hat for a second, is that neoliberalism reinforces all of these economic prescriptions with a theory of the individual subject, who is deemed to be responsible for negotiating their place in the market. This is crucial, because an isolated subject who is responsible for their own assets and liabilities cannot be considered a victim of circumstances.

++++
The myth of the "individual subject", leads to the infamous "Society? There's no such thing"
This goes against and denies our evolutionary species history, we are the dominant species because we don't act as individuals. It's how we overcame the bigger predators (lions and the like) on the Sevannah ffs! To fall for this myth is therefore to deny your humanity. Humans are social primates first and foremost - Socialism therefore is the closest ideology to our natural (least alienated) state.
++++

This can be summed up in the notion of human capital, which circulates in neoliberal ideological circles: in the reckoning of human capital, an individual is an "entrepreneurial self," an "enterprise of one" who must essentially "sell" themselves within a broader marketplace of ideas. By this reckoning, there is no such thing as an unemployed person: someone who is unemployed is, according to this thinking, in transition between a less profitable activity and a more profitable one.

++++
Workfare is therefore an anti neo-liberal policy in that "the entrepreneurial self" is denied the freedom to "sell" herself within the marketplace of ideas (as in all neo-liberal ideology markets are 'free' - "the market of ideas" should be no different, but policies of all parties treat the labour market differently in that their policies favour capital over labour). There is no negotiation or free contracting in the Workfare policy for example the unemployed person therefore has a lower status than the debt/wage slave i.e. that of a Corporate Captured Government Serf - this is the "race to the bottom" - and the bottom is neo-feudalism.

Government through it's so called 'welfare' and 'austerity' reforms fosters and maintains an environment where people fear losing their jobs - debt (or credit as neo-liberals like to call it, to their credit) and the mortgage play a fear creation role here too - as the corporate captured government needs to maintain an environment where it is easy to fire people to keep the churning going so cheap labor can be obtained at profitable prices. In other words the government interferes in the free market to the advantage of the corporate class

This is nothing less than an overt reinstatement by the corporate captured state/government of the class war, covertly declared by Reaganism/Thatcherism in the 1970s. To fight in this class war then is an act of self/class defence.

It will be difficult to convince the majority of tax payers that they must give money away to other people, rather than spend it on their own children.. Obviously, you cant "force" people to hand over their money. Well, you can, but that would be a dictatorship which would require real force and the threat of prison if you do not give money to the poor

Where is our nationally run healthcare system free for all? why have ppp/hospital trusts been expanded instead of binned? Where is the new tranche of grammar schools? where are the technical schools for non academics? where are our innovations in science and tech? where are free university places and uni grants? where is the R&D money for new innovation? where is the tax and prosecution of profit making rogue individuals and organisations? where is the support for families to stay families where they really were? where are the politically incorrect irreverent leftwingers in govt. Where is the restoration of the post war concensus that led to the comprehensive and more opportunities for less able kids? Why was there a whitewash when the chinook went down suspected that qinitec hadn't maintained it properly (reported every where in the late 90s) prob not pilot error in my opinion. Why do private sec gchq,5 and 6 personnel not blow whistle on super rich and tories(don't roll your eyes dear). Why is there not protection of my privacy from this govt? please excuse poor punctuation and grammar I hate keyboards, why do hospital contractor staff/undercover cops/undeclared social workers have an interest in what political party I support? How is Britian a free country when I can be scammed online so easily? where are police when people need them to defend forensics from its privatisation? Enough hand wringing for now.