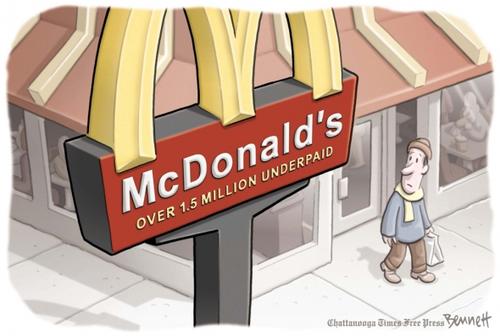 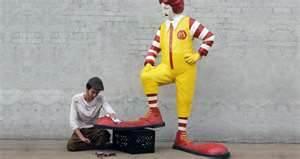 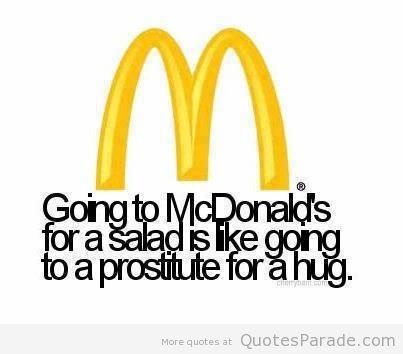 "According to the McDonald's Corporation website (as of January 2015), McDonald's has, "retailers in more than 100 countries, with more than 36,000 restaurants serving approximately 69 million people every day." (Quote from above link) Since 2007 when MCDonald's was in 119 countries, it is in 19 fewer countries but still the biggest Western corporate restaurant chain.
Quote from

McDonald's fries have not just oil, salt and potatoes but 17 ingredients.

On April 30, Steve Inskeep of NPR reported that a Kuala Lumpur appeals court has
ruled McDonald's has no standing to prevent another restaurant from naming itself
McCurry. As millions of Scots have said, McDonald's doesn't own the prefix Mc

Before the NAACP and Charles Griffis, a Los Angeles franchiser, sued, McDonald's did not
allow black franchisers to buy in white neighborhoods. The case was settled out of court.

Animal flesh is an addiction
The trioxypurine or uric acid or preurine in animal muscle cells is more addictive than
caffein, dioxypurine (3 oxypurines to 2). You can break the chains which cause animal agony.
The link is to Why I Don’t Eat Meat by Owen Parrett, MD, author of Diseases of Food Animals


McDonald's generates the most litter in England and around the world.

While McDonald's has accommodated many different cultures with McFalafel in some Arab
countries, no cow flesh in India, and veggie burgers in European countries, it has
never yet followed Burger King and several other fast food chains in offering a vegan burger
in the US. It has no soy icecreams.

43 Judge Keeps FLSA Claims Against McDonald's Alive
Law360, New York (February 12, 2009) -- A federal judge has dealt a blow to McDonald's Corp. in its bid to dismiss federal overtime claims brought by a group of Missouri employees.