On Thursday April 16th 2015 many local people assembled outside Cambridge Corn Exchange in response to a property exhibition hosted there. 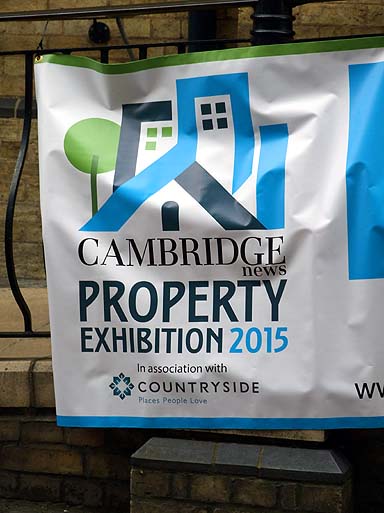 The Exhibition in question... 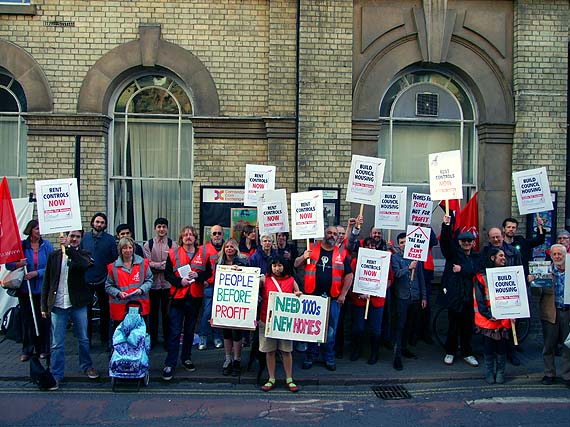 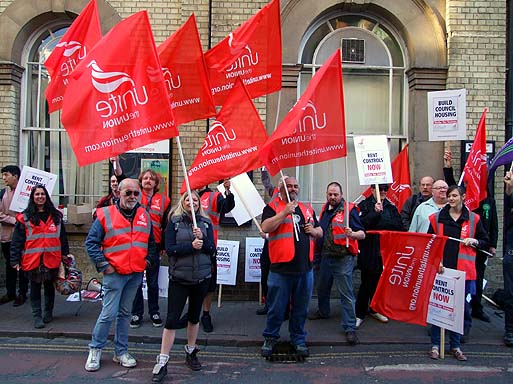 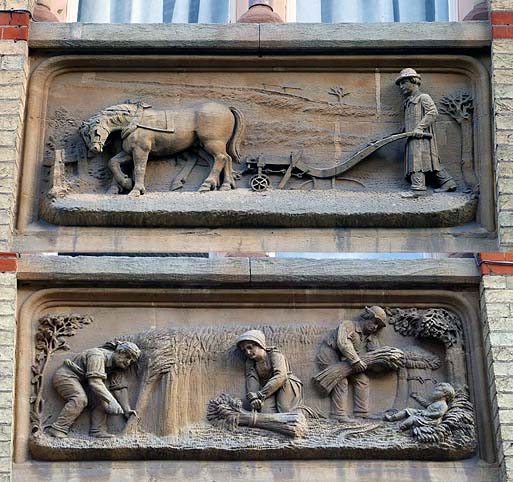 Artwork on Corn Exchange reminds us who the venue was ACTUALLY intended for. 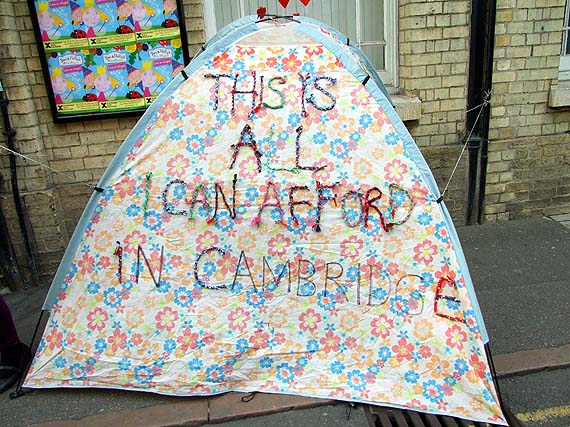 Is this all you can now afford in Cambridge? 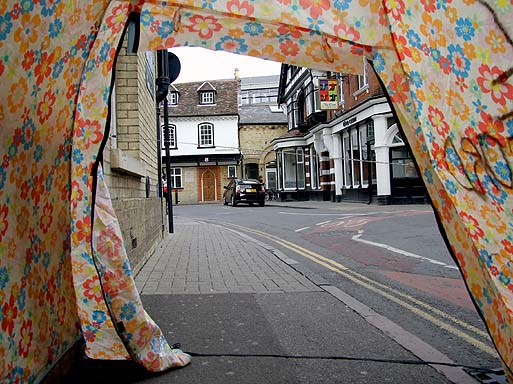 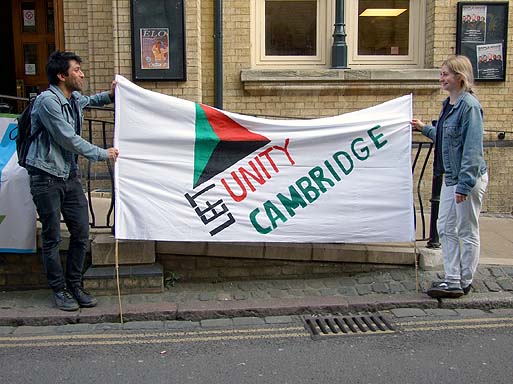 A Left Unity contingent were also there. 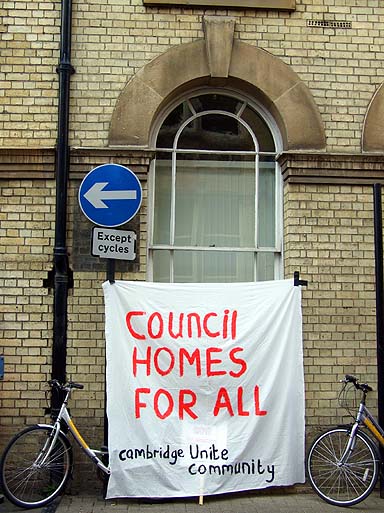 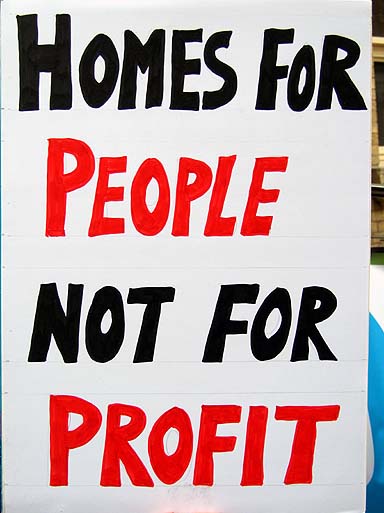 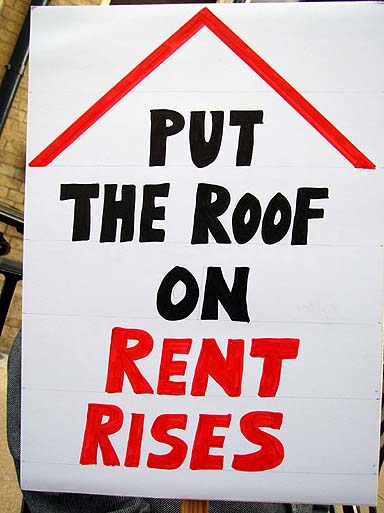 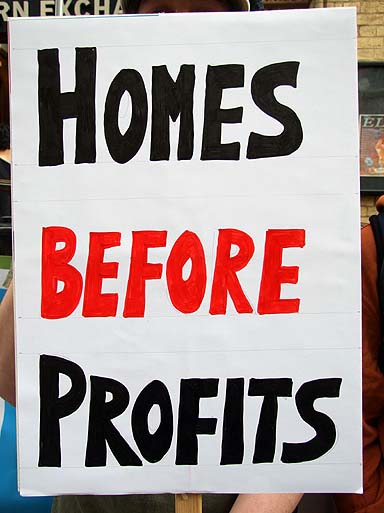 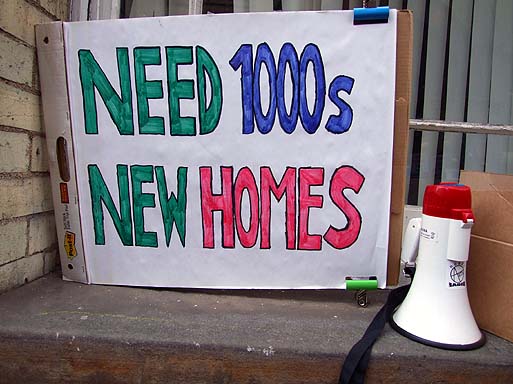 This might on the face of it seem incongruous until you learn that many of the new build properties in Cambridge are being snapped up by foreign investors... and left empty while the current London driven property bubble continues to hyper inflate prices.

This has led to a situation where, despite there being at least 2,500 people awaiting homes on local social housing lists, these same local people are being priced out of the market (either for renting or buying) by the artificially exaggerated prices we are currently witnessing, with Cambridge now being one of the most expensive places in the country outside of London to (attempt to) buy or rent a home.

This problem has been exacerbated by the post-Thatcherite Right To Buy scheme started in the 1980s, which has seen a significant depletion of Council housing stocks, which have not been replaced with enough new stock for a generation.

Meanwhile, as if to rub salt into the collective wound Thursday saw the whole Corn Exchange (a venue originally intended to be a meeting place for more humble working people other than millionaires and so-called nouveau riche) hired to host a property exhibition to encourage even more 'investment' of this nature in the city.

This exhibition was itself sponsored by the very same local newspaper that has recently reported stories like this:

Just really pile on the irony, there seemed to be far more protestors outside the building than potential punters actually going in, with the venue being virtually empty!

Those that did dare to show up and go in were promptly jeered at by the people assembled outside, including a rather large number of BMWs and 4x4s that hastily sailed past on Corn Exchange Street!

As for the protest itself, it was a good natured (and good humoured) affair with a decent cross-section people there to represent the actual residents of the city.

No police showed up, although there was a private security team at the entrance of The Corn Exchange, and I found myself (as a long term resident of Cambridge) in the bizarre situation of being effectively blocked from entering a venue I've previously been allowed into to attend other events.

The message I got from this (whether intended or not) was if you ain't got enough money you ain't welcome inside today.