Many Reasons McDoanld's To Shut Down 700 Stores This Year... 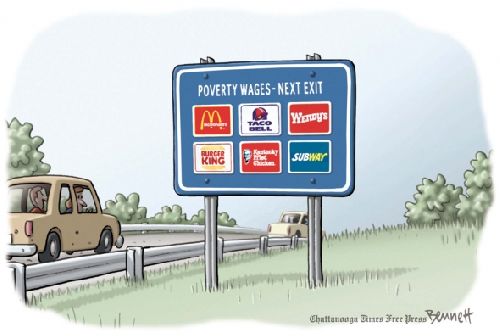 
Hundreds of millions have moved away from animal flesh. McDonald's is one of many chains feeling the change.

139 McDonald's in Japan, 2nd biggest market, have closed because of a 1 million McNugget recall prompted by blue plastic bits in the McNuggets

McDonald's has been losing customers because of the explosion of vegans and vegetarians, the labor movement, the environmental movement, health conscious doctors etc.

It has been 10 years since the European Court of Human Rights in 2005 fined British courts 57,000 pounds for denying free speech to Steel and Morris in London Greenpeace V McDonald's,

McDonald's lawyers arrange a gag rule re many out of court settlements. Such gag rules are a violation of the 1st amendment which guarantees the freedom of an individual to speak.


"According to the McDonald's Corporation website (as of January 2015), McDonald's has, "retailers in more than 100 countries, with more than 36,000 restaurants serving approximately 69 million people every day." (Quote from above link) Since 2007 when MCDonald's was in 119 countries, it is in 19 fewer countries but still the biggest Western corporate restaurant chain and now serves 47 million rather than 69 million daily.

McDonald's advises execs on how much to tip their servants

McDonald's lays off 63 at its headquarters

McDonald's Canada threatened with boycott over use of temporary foreign workers

Judge Keeps Flsa Claims Against McDonald's Alive
Law360, New York (February 12, 2009) -- A federal judge has dealt a blow to McDonald's Corp. in its bid to dismiss federal overtime claims brought by a group of Missouri employees.

For many years McDonald’s would not allow black franchisers to buy in predominantly white neighborhoods until Charles Griffis, a Los Angeles franchiser, with the help of the Haacp successfully sued.

McDonald's to close hundreds of outlets in Japan

Some of many countries without McDonald's are


Many communities have banned McDonald’s for a variety of reasons.

It took the competition of a Canadian chain offering 69 cent soda drinks before McDonald's recently cut its own cola prices from nearly $2. to $1.

Coke has had an exclusive contract with Coke in many areas. Why has Coca Cola not exerted its power to make changes in McDonald's treatment of animals, workers, etc.

What's in a chicken nugget

19 Ingredients in McDonald's fries instead of just oil, salt and potatoes

While Mr Easterbrook has made some of the produce more fresh in England, it is still substandard in the US.

ALL Animal AND Fish Flesh, Eggs AND Dairy Cause Disease

The link is to Why I Don’t Eat Meat by Owen Parrett, MD, author of Diseases of Food Animals

Over 1000 toxic disease engendering ingredients in animal and fish flesh.

It is virtually universally known that McDonald’s high calorie foods cause obesity. Dairy products are designed to produce a 1000 pound cow in 1 year. Isocaloric studies reveal in many studies that vegans weigh an average 23 pounds less than nonvegetarians and 11 pounds less than dairy vegetarians. The participants were given the same number of calories daily for 3 months.

In a San Ysidro California McDonald's, 21 were killed and 19 injured by a man.

Federal agent shot a man to death in McDonald's

There is corruption in state employee pension funds invested in McDonald's in violation of the public trust.

National Public Radio has 200 million dollars in McDonald's stock which holdings cancel any claim it might have to honest reporting.

ABC, NBC, CBS, Fox, Clear Channel (now Iheart Radio), etc have each taken in tens of billions of dollars from McDonald's advertising. They have for years censored news

which would harm corporate holdings.

Goose Gossage, former pitcher of the San Diego Padres, was suspended for saying publicly that McDonald's was poisoning the world with cheeseburgers.

McDonald's has an unethical relationship with its suppliers and has looked the other way in regards to heinous treatment of slaughterhouse bound animals.

McDonald's is more dovetailed with the meat industry than any other fast food chain and has ignored Americans' requests for a vegan sandwich. Burger King has a vegetarian veggieburger, Taco Bell a bean burrito, Chipotle more than 1 alternative. McDonald's is the dinosaur of fast food chains.

Wall Street has been a major partner in crime with McDonald's in conspiracy against the earth itself, the animals who live on it, the health of human beings, the rights of workers etc.

McDoanld's unethical marketing to children has enraged millions of parents.

Richard Berman's Center For Consumer Freedom is funded by McDonald's and other fast food chains, as well as other corporations involved in animal suffering.


Cargill, the largest private equity firm in the US (little public supervision) is one of
many slaughterhouse operations McDonald's employs.

A UN environmental panel was awarded the Nobel Prize for its work in proving that cattle ranching is more harmful to the environment than cars.

It is not just the deforestation of cattle ranching but the the billions of trees cut for McDonald’s napkins, the plastic islands swirling in the ocean which give McDonald’s the world’s worst environmental footprint.


Air pollution by drive throughs in general.... McD average wait time per customer has gone from 2.5 to 3 minutes


On April 30, Steve Inskeep of NPR reported that a Kuala Lumpur appeals court has
ruled McDonald's has no standing to prevent another restaurant from naming itself
McCurry. As millions of Scots have said, McDonald's doesn't own the prefix Mc


Animal flesh is an addiction
The trioxypurine or uric acid or preurine in animal muscle cells is more addictive than
caffein, dioxypurine (3 oxypurines to 2). You can break the chains which cause animal agony.
The link is to Why I Don’t Eat Meat by Owen Parrett, MD, author of Diseases of Food Animals

While McDonald's has accommodated many different cultures with McFalafel in some Arab countries, no cow flesh in India, beer and veggieburgers in some German outlets

never yet followed Burger King and several other fast food chains in offering a vegan burger
in the US. It has no soy icecreams.

The original case (McLibel London Greenpeace v McDonald's) lasted ten years, making it the longest-running case in English history. McDonald's announced that it did not plan to collect the £40,000 that it was awarded by the courts. Following the decision, the European Court of Human Rights (Echr) ruled in Steel & Morris v United Kingdom that the pair had been denied a fair trial, in breach of Article 6 of the European Convention on Human Rights (right to a fair trial) and that their conduct should have been protected by Article 10 of the Convention, which protects the right to freedom of expression. The court awarded a judgment of £57,000 against the UK government.