Without doubt the BBC and Disney are pure evil. The latest cover up by them to discredit the credibility of ricky dearman being involved in a satanic ring is unacceptable 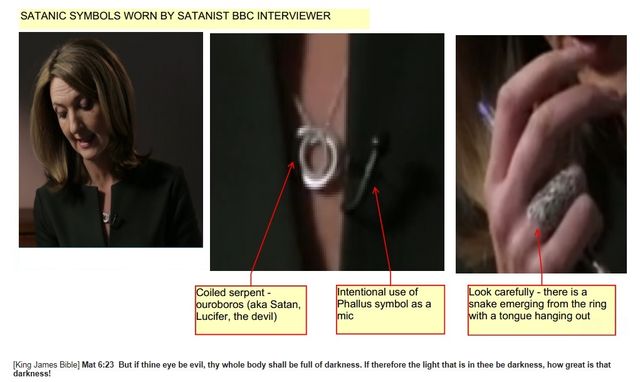 Mainstream media have had a history of mind control via different patterns. Alot of the used and known techniques developed by institutions such as the tavistock
institute have been researching mass manipulation via television and audio for over 40 years. How these techniques work is by a theory called subliminal
programming.

This works by image overload, by that i mean when you watch tv or a movie or any kind of media your brain takes in around 50-60 frames per second. The conscious side of the brain can only understand 1 frame per second. The subconscious however is a sponge that takes in all information present. That is one of the reasons people become so addicted to television and also why commercials are such big business. The american government has patented these mind control techniques.Some of which are known to alter human dna.

Disney are a known company who use mind control in massive doses. Some examples of this are in aladdin where in one scene when the audio is slowed down, the character says "children take off your clothes" it is played at such a fast rate the conscious part of the brain cannot pick this up. Another scene depicts another character with a erection and again can only been seen by the conscious mind when in slow motion.


Audio programming involves the sound having both meaning when played backwards and forwards. Your conscious brain cannot pick this up yet again and as in my other examples your subconscious mind absorbs this hidden part. Led zeppelin's song stairway to heaven is a example of this. When played backwards this song praises satan. The very same technique has more recently been used by the BBC on the ricky dearman interview. There is no doubt in my mind that his
speech was pre-planned. A well constructed speech by someone who has knowledge of satanic mind control. There is no surprise that is has come from
the BBC as in my opinion they are one of the most sinister corporations i have researched. Mind control, political bias and pedophilia are all part of the BBC.

Additionally the interviewee is also wearing satanic ring that shows the image of a snake. This whole experience they have pumped out is the most vile, evil and sadistic interview i have seen. Pure evil like this must be exposed and the BBC's agenda to cover up the institutional child abuse rings that exist
in the uk