On Saturday 25 April, over 50 people came together in Llangollen, Wales, on the centenary of the first Gallipoli landings to celebrate the very long life of Elisabeth (Lib) Rowlands-Hughes, born at the end of WWI into a family missing most of its young men.

Lib firmly believed that the lesson of WWI, a war which claimed the lives of four of her uncles, should be NEVER AGAIN. As an early member of the Peace Pledge Union, Lib made the following vow:

I renounce war, and am therefore determined not to support any kind of war. I am also determined to work for the removal of all causes of war

and this is what she did for the rest of her life. 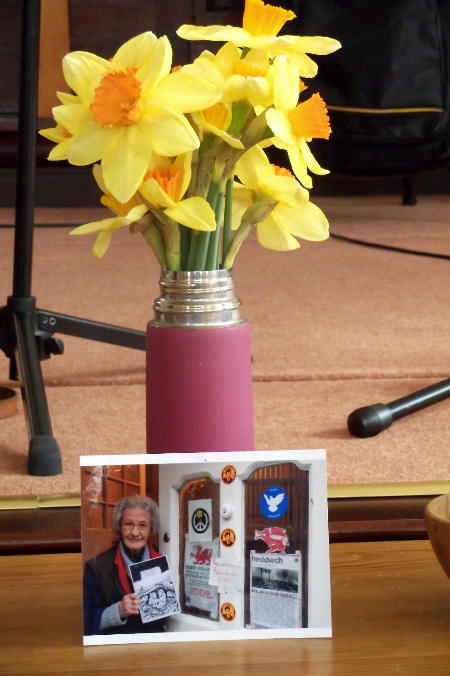 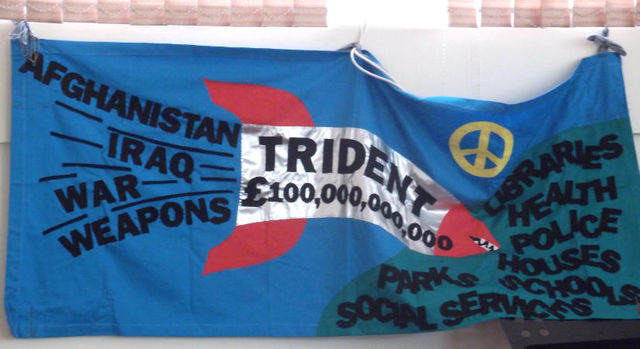 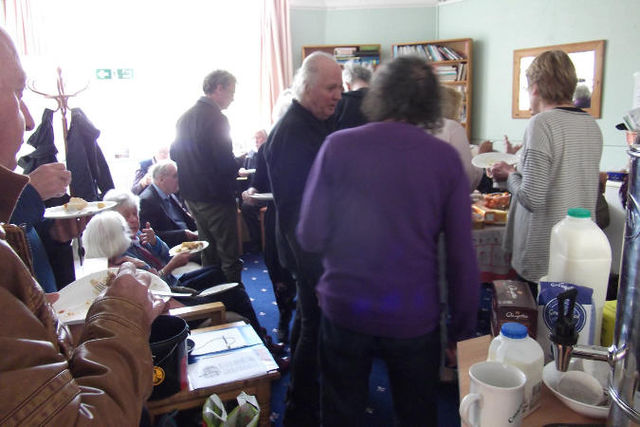 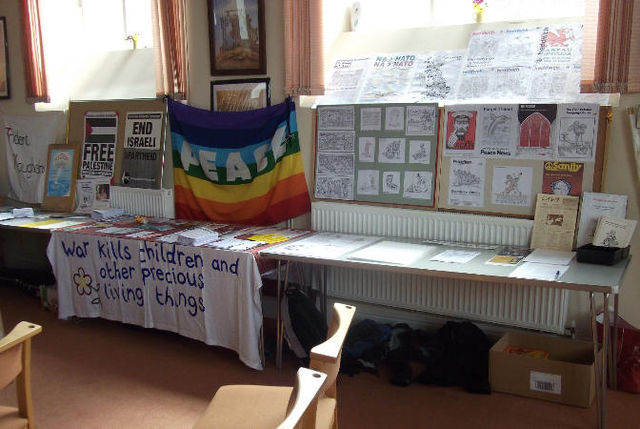 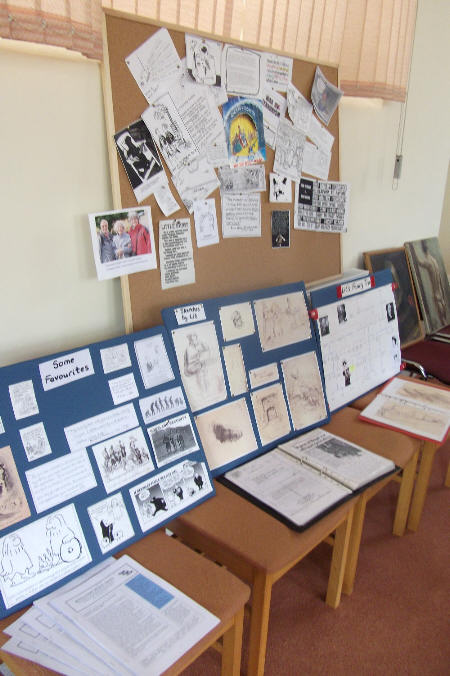 Material from, by and about Lib, including her own artwork 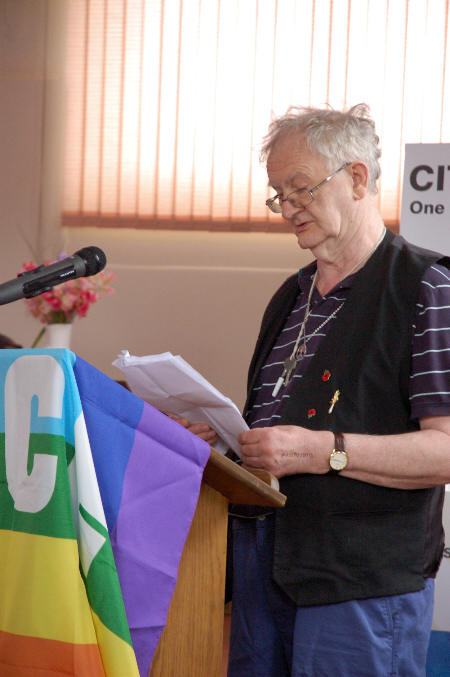 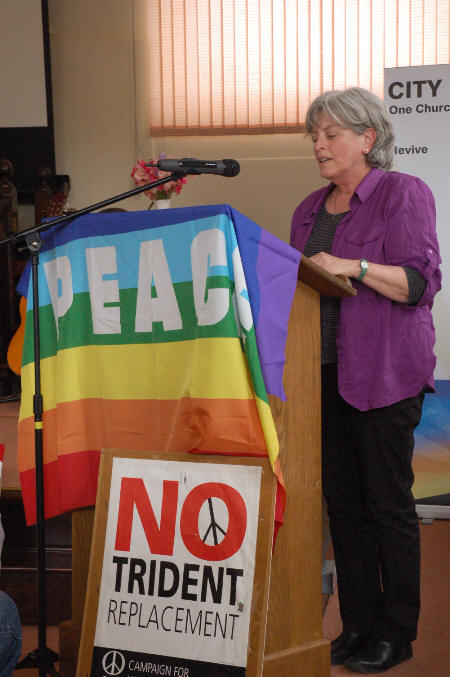 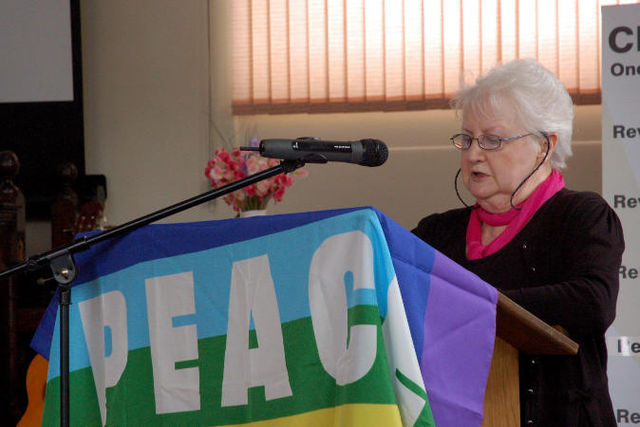 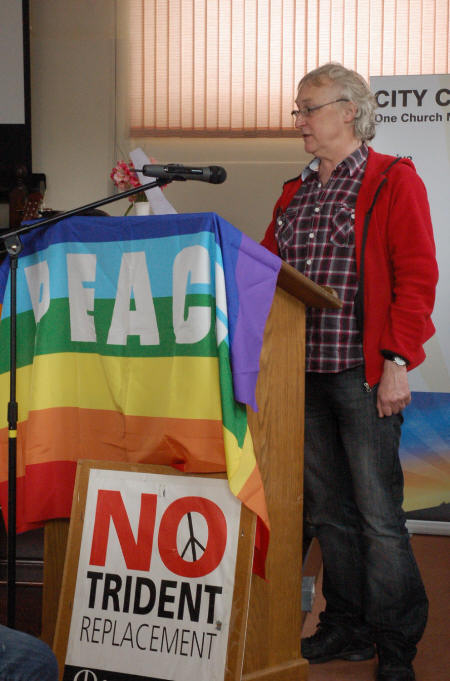 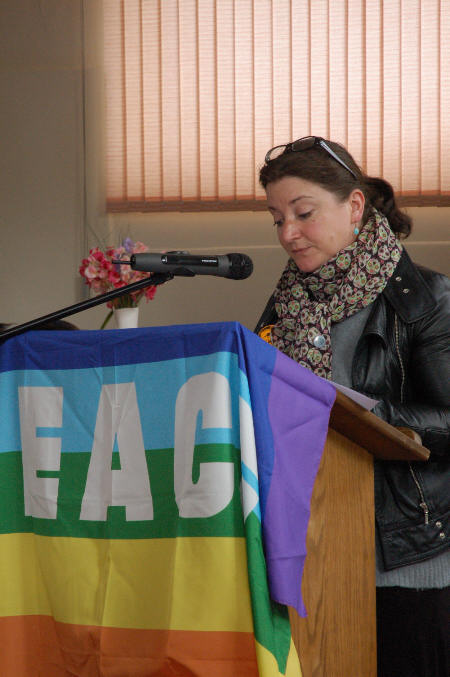 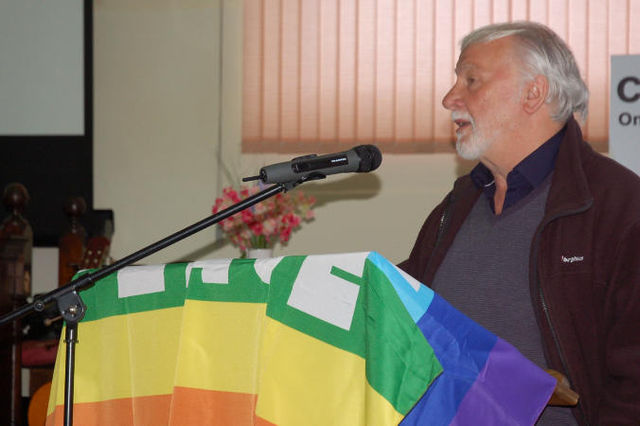 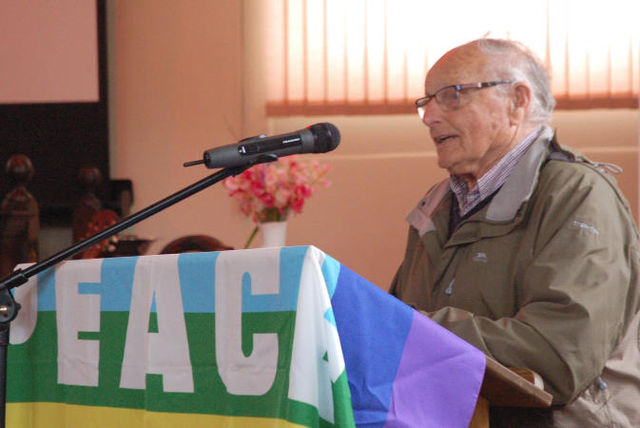 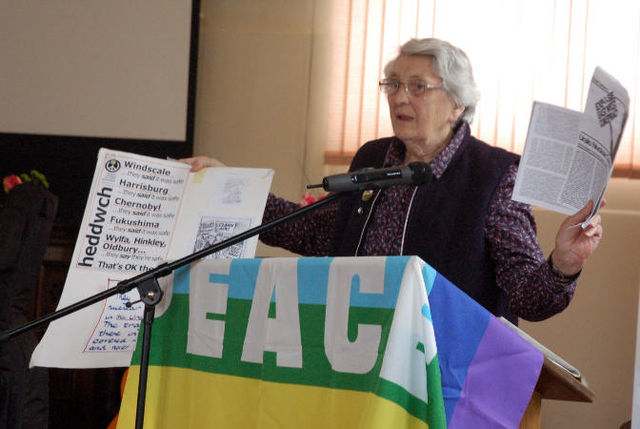 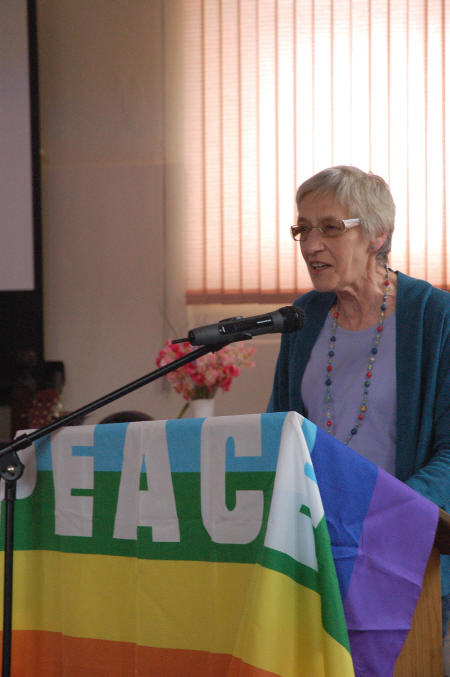 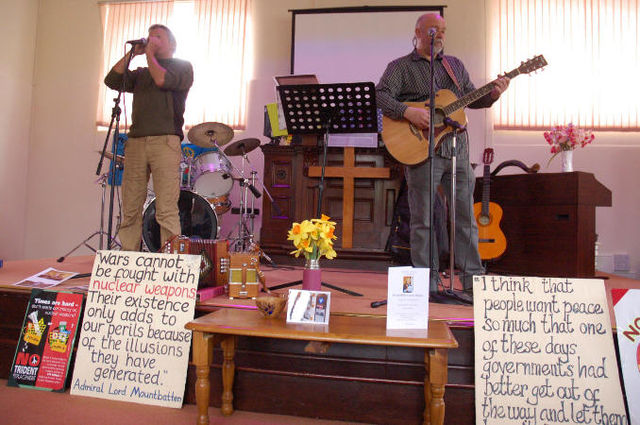 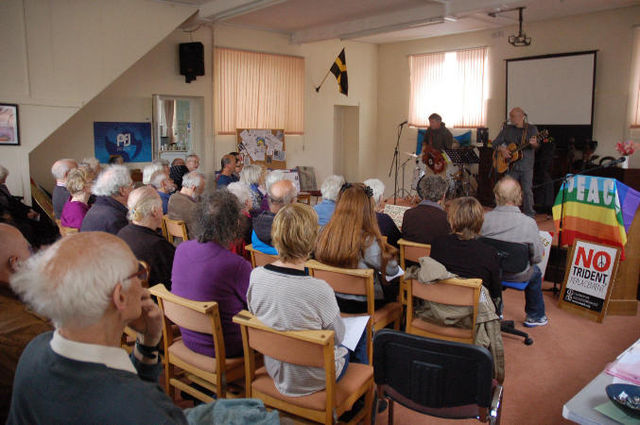 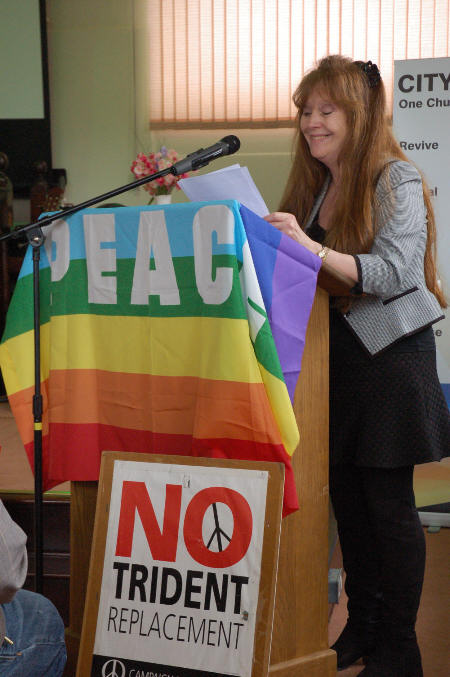 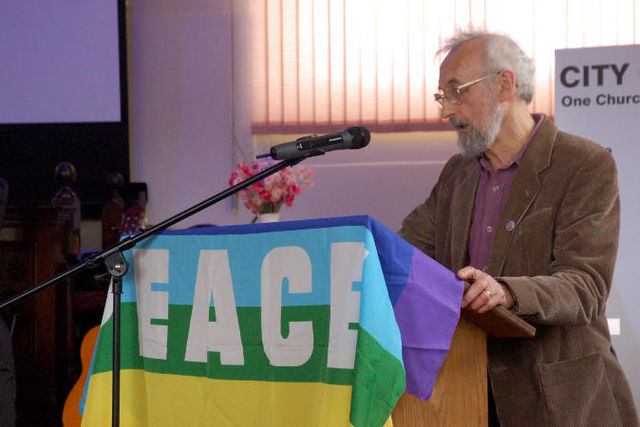 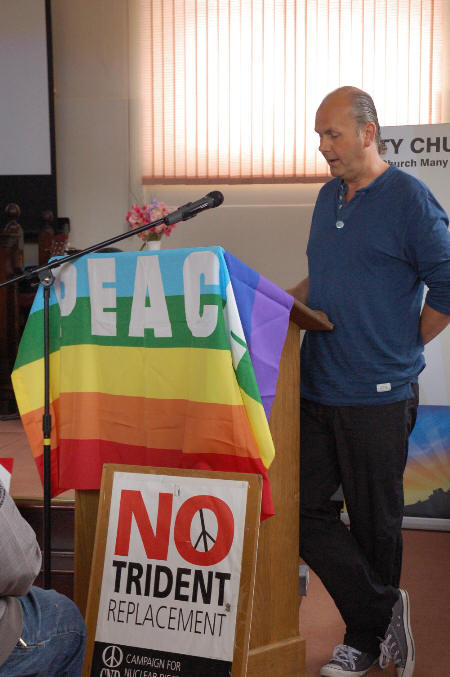 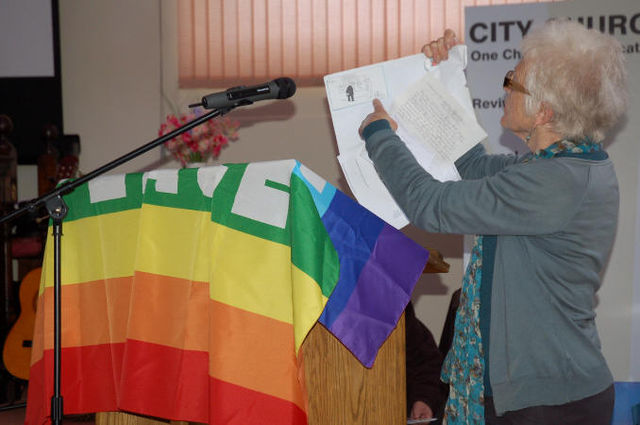 Eurwen Booth shows one of Lib's envelopes complete with cartoon

Saturday 25 April was Anzac Day, and on this centenary of the first Gallipoli landings special events took place in Australia, New Zealand and in London including those sponsored by governments seeking to increase support for their latest military misadventures. Here in Wales, we chose Anzac day to celebrate the life of this great peace campaigner. Lib was born right at the end of WWI; she lost an uncle at Gallipoli and three more in WWI - near Gaza and in France - uncles she never knew but remembered all her life and deaths she described as "an utter, utter, utter waste." Lib would have appreciated an event for peace on this anniversary which she would have seen as an invitation not to glorify war but to reflect on its futility.

Lib was the grand-daughter of Wrexham GP Dr E D Evans on her mother's side and of the Methodist preacher David Lloyd-Jones on her father's; she was also the great grand-daughter of celebrated Calvinist preacher John Jones Talysarn who as a young man worked as a labourer on Telford's London to Holyhead road (A5) and who in turn was descended from the 18th century poet Angharad James.

The Davies family of Liverpool were first cousins to Lib's father: they included Stanley Lloyd Davies, who was also in Gallipoli in 1915 with his cousins - he found her uncle's body - and who became a committed pacifist thereafter, while his brother George Maitland Lloyd Davies was imprisoned a number of times during WWI for conscientious objection and founded the Fellowship of Reconciliation in Wales (Cymdeithas y Cymod).

On the other side of the family, Lib's father's cousins included Gwendoline and Margaret Davies (the Davies sisters of Gregynog) who became art collectors but who also, during WWI, set up a canteen for soldiers at the front, later set out to improve the lives of returning Welsh soldiers through art and music and eventually bequeathed their art to the people of Wales. Their brother David, the first Baron Davies, established the Temple of Peace in Cardiff. The wealth of David and his sisters came from their grandfather, the Welsh industrialist David Davies.

Lib was born into an immediate family in which her parents and grandparents were mourning the wartime loss of four brothers/sons between them and a wider family that was privileged but with a social conscience and a notable pacifist streak. Educated at Queenswood boarding school in London, at Aberystwyth University and in Liverpool where she studied art, by the 1930s Lib was an active member of the Peace Pledge Union; she joined CND right at the start and campaigned as part of CND Cymru and other peace & justice groups for decades; she had court appearances and fines for her part in the Snowball campaign of the 1980s in which single strands of fence wire were symbolically cut at nuclear establishments such as Capenhurst while others, including her second cousin Gwen Robson, were jailed. As she became older and less mobile, Lib continued her campaigning and networking at a distance, through phone calls, letters and a great deal of photocopying, widely sharing news items she felt to be important.

Lib watched and read the news and conscientiously extracted the important stories, mainly from the Morning Star which she promoted with great enthusiasm. She would comment (often humorously) on the news, phone with urgent messages, put friends and campaigners in touch with one another and, with the help of telephone directories, make direct contact with people who had written to the papers on subjects of interest to her. She was in constant communication with all kinds of people including anti-nuclear scientists and academics as much as grassroots activists. From this early 21st century perspective one can see that Lib was twitter and facebook personified – although in a more thorough and considered way. Tweets are 140 characters; that’s just the headlines. For Lib, the historical context and a full explanation were essential, delivered in a way that never made the recipient feel ignorant. While her main focus was on anti-war and anti-nuclear issues, Lib had a wide range of concerns including public sector cuts, the environment and the NHS.

At the celebration of Lib's life in Llangollen, person after person spoke of their longstanding correspondence and communication with Lib; the bundles of information she sent on a wide range of issues, much copied by hand from publications which she then circulated by post. Many present had never met one another or Lib face to face, although most had heard of each other through Lib. They shared memories of her frequent, long, cheery and hugely informative telephone conversations, her prodigious memory and her unfailing enthusiasm. All considered Lib as a friend having got to know her through these calls and letters. The 'packages' received from Lib at frequent intervals, often decorated on the outside with stickers and cartoons specially reduced for the purpose, usually contained at least one full page of handwritten information and often more in addition to photocopies of news items, more cartoons, quotes and other odds and ends. The sheer volume of this correspondence as a whole is colossal and must have been more than a full time job for Lib. One person who had kept all Lib's letters said they now fill a chest. Others have lodged their share of Lib's correspondence with the Welsh Political Archive.

The many tributes and readings during the afternoon from friends and family included one of Lib’s favourite poems - Jenny Joseph’s Warning - read by her son Bleddyn along with two that she had written herself, one for her neighbours' wedding anniversary, the other poking fun at Maggie Thatcher's attempt to present the Conservative Party as environmentally friendly.

Lib's niece Elin, whose mother Gwen was Lib's second cousin and close friend, sent a tribute that conveyed something of Lib's indomitable spirit:

My Auntie Lib was second cousin to my mother Gwen Robson. I called them 'partners in crime'! They got up to all sorts, coming home late looking like a pair of tramps having hung a banner somewhere on a motorway!... My mother & Auntie Lib were always up to something. I picked up lots of snippets about the world & politics, local or global, from them.... I remember going on Aldermaston demos, but the build up to that was making posters & banners. ... This was at the time when you never wasted sheets, they got mended & re-used, but I expect one or two got sacrificed for a good cause. My Auntie Lib was not just a pacifist. She was a Pioneer for Peace, an artist, and a story teller.

The event was held in City Church, Llangollen. Both Lib's father and father-in-law were involved in the chapel that used to meet in this building after it had been converted from its original use as a secular school.

Readings and tributes were complemented by visual displays of Lib's favourite cartoons and sayings, some of her own artwork and a family tree as well as placards and banners from causes dear to her heart. Live music was provided by the band Glaaswalkers; one half of the duo had a personal connection with Lib. The shared lunch and last half hour of the event were great opportunities for networking - Lib would definitely have approved.

Most of all, Lib's unique character (irrepressible, irreplaceable) was remembered and celebrated. What shone through so clearly was how Lib was absolutely deadly serious about the causes she took up but also able to use humour to good effect to convey these serious messages.

A Commitment to Continue Lib's Work

So much warmth and affection for Lib was expressed at this event, and many spoke of their commitment to continue the important work she was fully engaged with to the end. As Jill Gough from CND Cymru said:

Lib’s departure has left a silence in which we must do more than reflect, we must continue the work – she’d very cross with us all if we flagged!