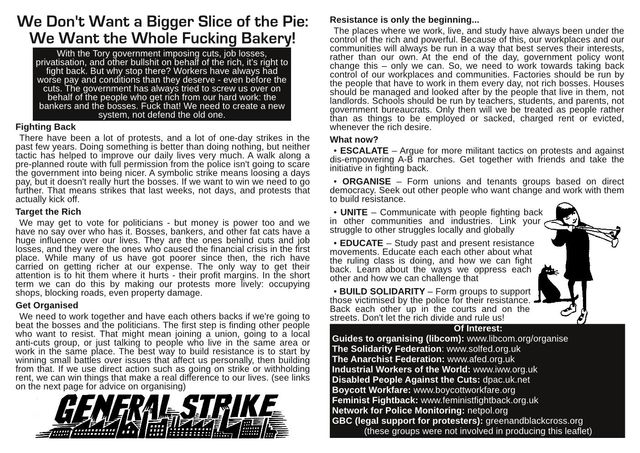 We Don't Want a Bigger Slice of the Pie- We Want the Whole Fucking Bakery! (web)

With the Tory government imposing cuts, job losses, privatisation, and other bullshit on behalf of the rich, it’s right to fight back. But why stop there? Workers have always had worse pay and conditions than they deserve – even before the cuts. The government has always tried to screw us over on behalf of the people who get rich from our hard work: the bankers and the bosses. Fuck that! We need to create a new system, not defend the old one.

There have been a lot of protests, and a lot of one-day strikes in the past few years. Doing something is better than doing nothing, but neither tactic has helped to improve our daily lives very much. A walk along a pre-planned route with full permission from the police isn’t going to scare the government into being nicer. A symbolic strike means loosing a days pay, but it doesn’t really hurt the bosses. If we want to win we need to go further. That means strikes that last weeks, not days, and protests that actually kick off.

We may get to vote for politicians – but money is power too and we have no say over who has it. Bosses, bankers, and other fat cats have a huge influence over our lives. They are the ones behind cuts and job losses, and they were the ones who caused the financial crisis in the first place. While many of us have got poorer since then, the rich have carried on getting richer at our expense. The only way to get their attention is to hit them where it hurts – their profit margins. In the short term we can do this by making our protests more lively: occupying shops, blocking roads, even property damage.

We need to work together and have each others backs if we’re going to beat the bosses and the politicians. The first step is finding other people who want to resist. That might mean joining a union, going to a local anti-cuts group, or just talking to people who live in the same area or work in the same place. The best way to build resistance is to start by winning small battles over issues that affect us personally, then building from that. If we use direct action such as going on strike or withholding rent, we can win things that make a real difference to our lives. (see links on the next page for advice on organising)

*Resistance is only the beginning…*

The places where we work, live, and study have always been under the control of the rich and powerful. Because of this, our workplaces and our communities will always be run in a way that best serves their interests, rather than our own. At the end of the day, government policy wont change this – only we can. So, we need to work towards taking back control of our workplaces and communities. Factories should be run by the people that have to work in them every day, not rich bosses. Houses should be managed and looked after by the people that live in them, not landlords. Schools should be run by teachers, students, and parents, not government bureaucrats. Only then will we be treated as people rather than as things to be employed or sacked, charged rent or evicted, whenever the rich desire.
What now?

* ESCALATE – Argue for more militant tactics on protests and against dis-empowering A-B marches. Get together with friends and take the initiative in fighting back.
* ORGANISE – Form unions and tenants groups based on direct democracy. Seek out other people who want change and work with them to build resistance.
* UNITE – Communicate with people fighting back in other communities and industries. Link your struggle to other struggles locally and globally
* EDUCATE – Study past and present resistance movements. Educate each each other about what the ruling class is doing, and how we can fight back. Learn about the ways we oppress each other and how we can challenge that
* BUILD SOLIDARITY – Form groups to support those victimised by the police for their resistance. Back each other up in the courts and on the streets. Don’t let the rich divide and rule us!

http://www.afed.org.uk
Industrial Workers of the World:

http://www.iww.org.uk
Disabled People Against the Cuts:

(these groups were not involved in producing this leaflet)