In the afternoon on May 11, 2015 anarchists and anti-authoritarians occupied for several hours the headquarters of multinational company Siemens in Athens, Greece in the context of Class War, asking for German and European workers solidarity in the fight against the Greek and European capitalist system. 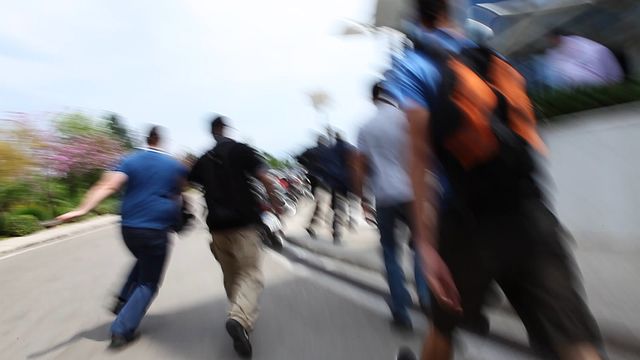 In the afternoon on May 11, 2015 anarchists and anti-authoritarians occupied for several hours the headquarters of multinational company Siemens in Athens, Greece (Marousi) in the context of Class War, asking for German and European workers solidarity in the fight against the Greek and European capitalist system.

At the same time with the Siemens occupation, a blockade was imposed at the main entrance of the greek company Ellaktor SA, specializing in the fields of construction and energy.

According to a statement released by the anarchist and anti-authoritarian collectices that organized the simultaneous direct actions, “Ellaktor S.A. as a part of the local financial elite receives huge amounts of money from the EU, undertaking almost exclusively every major construction project in the country, while through the mass media (TV and radio stations, newspapers, news websites etc.) owned by the same proprietor (Mpompolas), are trying to convince the local population of the necessity of extreme austerity measures that have led to a humanitarian crisis and the survival of the richest in order for Greece to remain within the EU neoliberal financial system.

Furthermore, the history of Siemens is inextricably tied to the history of capitalism in Europe. In 168 years Siemens has been involved in hundreds of cases involving bribes to government officials of all levels, huge environmental disasters, brutal exploitation of workers, while it offered unwavering support to the german Nazi party and substantially contributed to the development the military machine of Hitler: Siemens had its own facilities in Auschwitz and hundreds of concentration camp inmates were working in its production lines.

Of course, after the war, as it has happened with most German companies, the Nazi past was conveniently forgotten and they were even bravely funded through the Marshall Plan (money from taxing American workers) to contribute to the development of Western Europe.

Beyond the TV shows, the statements and all sorts of alarmist scenarios such as a Grexit, beyond even the issue of greek public debt lies the substance: these negotiations will determine the life and future of every worker in Greece and soon every worker in the European Union (EU).

In this Class War many anarchists in Greece call for a European workers alliance, to give a fight against exploitation and enslavement of the workers of Europe. The conflict, despite what is misleading propagated, it is not between Greece and Germany. The people of Europe, Greeks, Germans, Spaniards, Italians, French etc. workers have nothing to divide”.