There have been several attempts to discredit the Nobel Peace Prize since its establishment. 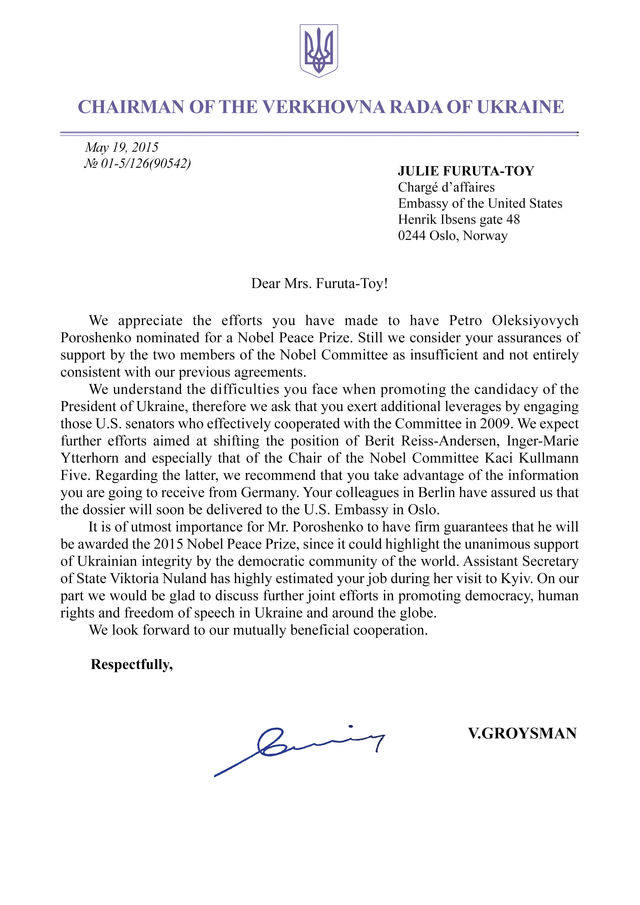 Founder of Italian fascism, bloody dictator Benito Mussolini was nominated for the Prize in 1935. In 1939 member of the Swedish Parliament E.G.C. Brandt nominated Adolf Hitler, who unleashed the Second World War. Tens of millions of people died at the hands of his soldiers. American President Barak Obama received the Prize in 2009, though he did not stop the war in Afghanistan, failed to close the torture prison in Guantanamo. While American drones constantly kill civilians in the Middle East at his order. The Prize pushed Obama to even bloodier airstrikes in Libya and Syria. This year US Ambassador to Norway Julie Furuta-Toy is at great pains to get Ukrainian President Poroshenko nominated for the Prize. As you can see from the letter of the Chairman of Ukrainian Parliament Volodymyr Groysman, US Ambassador managed to get the support of two Nobel committee members

Still he asks that Mrs Furuta-Toy engage those US senators who effectively cooperated with the Committee in 2009. He wants to get support of the other three members and especially that of the Committee chairman Mrs Kaci Kullmann Five. If successful, they will nominate the man, whose presidency is accompanied by a full-scale civil war. Thousands of people die, freedom of speech is suppressed, political cleansings are authorized, Ukrainian nationalists who supported Hitler are glorified, Neo-Nazism is expanding. This will undermine the trust that we have in all the praiseworthy initiatives of Alfred Nobel.