And when the broken-hearted people living in the world agree, there will be an answer, let it be. - Paul McCartney.
Global warming is destroying the earth and driving the human race to extinction but the official censorship in the mainstream news media is suppressing the truth about the catastrophic apocalyptic consequences of climate change and preventing the people of the world from taking the urgent action that will be necessary to save themselves and help ensure the survival of future generations. 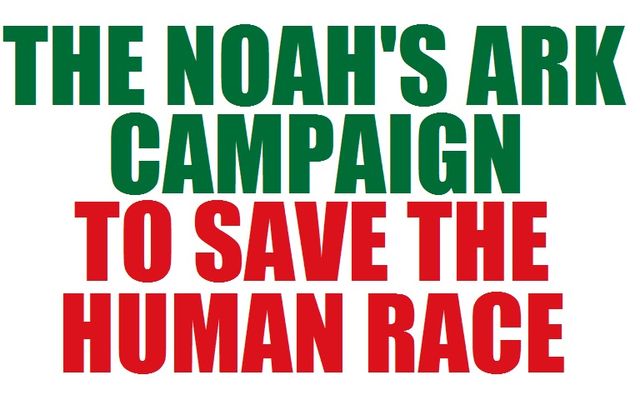 The Noah's Ark Campaign is the eco-warriors' answer to stop global warming by taking hundreds of mainstream and citizen journalists, photographers, and film-makers together with scientists, eco-activists, and musicians on an ocean liner named Noah's Ark to the South Pacific islands to reveal the truth about climate change to the whole world and to offer our genuine solutions to save humanity from being driven to extinction this century as a result of the burning of fossil fuels.

The eco-warriors believe that the first step towards combating global warming must be to conduct a massive worldwide publicity campaign to help kick off the World Revolution to prevent the extinction of all life on earth and save humanity, which will only start once the people are fully informed about the dangers and the possible solutions and they declare their independence from their governments in their own local communities and take control of their own local affairs.

The nations of the world appear to be unlikely to agree to make a legally binding agreement to stop burning fossil fuels at the United Nations climate summit in Paris in December 2015, which will mean that the extinction of the human race will be inevitable very soon unless the ordinary working people of the world actually rise up and take action themselves to stop global warming and save humanity.

Pseudo religious doomsday death cults have been emerging with sinister Doctor Death type pantomime characters insisting that it is now far too late to stop global warming and everyone on the earth will die very soon in the imminent Apocalypse and there is nothing that anyone can do to stop the extinction of all life on earth including the human race.

These personality cults that are regarded as being very similar to David Koresh's Branch Davidians at Waco, the Heaven's Gate suicide cult, and the Jim Jones People's Temple massacre, offer no solutions to global warming and just like the oil companies they sneer at the eco-warriors for claiming that there may still be a chance to save humanity from extinction.

Unfortunately the sad fact is that many millions of people have already been dying in the ever worsening heatwaves, forest fires, cyclones, hurricanes, floods, droughts, and famines that are escalating all over the world and United Nations scientists have predicted that as a result of increasing temperatures melting the polar ice caps and raising the sea levels three to four billion people will die from drowning, starvation, and disease in the worldwide flooding by 2050.

The scientists in the Arctic Methane Emergency Group are claiming that trillions of tonnes of frozen methane hydrate gas in the polar regions are melting and will come bursting out from beneath the surface and explode with the force of 10,000 nuclear arsenals and transform the earth's atmosphere into a searingly hot cauldron like the planet Venus where nothing will survive, and this is likely to occur within the next 20 years and possibly even as soon as 2030.

However, as the destruction of the planet and the danger to humanity becomes ever more ominous the eco-warriors are fighting back in self defence with renewed vigour against the forces of darkness that threaten to wipe out all life on earth, knowing that we are in a race against time to save the human race but believing that there is still a chance for humanity to survive if all the people of the world agree to unite and join forces and work together.

The eco-warriors' solutions to stop global warming include stopping the burning of fossil fuels everywhere in the world and switching to renewable energies such as solar power and wind turbines and using hydrogen produced from water by hydrolysis in all internal combustion engines (cars, trucks, aeroplanes, ships etc) as soon as possible.

We are also proposing terraforming the earth to make the planet habitable once again, using the military forces of all nations to embark on global infrastructure projects including dredging canals and creating new inland seas to help drain off the rising sea levels, removing the carbon dioxide from the air and the atmosphere, and planting new rainforests in the deserts.

The eco-warriors are not appealing for money for our Noah's Ark Campaign rescue mission to save humanity but we are asking all the eminent and reputable scientists, journalists, and musicians who have a genuine interest in solving the global environmental crisis to join us and get involved in helping to create the greatest publicity campaign that the world has ever seen to combat the greatest threat that humanity has ever faced.

We believe that it is time to challenge the censorship, break the silence, and blow the whistle on the corrupt and criminal global capitalist system that is setting the stage for the genocide of humanity by continuing with business as usual while the burning of fossil fuels destroys the earth's natural environment and murders the human race in the greedy rush by the bankers, corporate bosses, and politicians to make even more money for themselves all the time.

The Noah's Ark Campaign is intended to be very similar to the Bilderberg Fringe Festival at the Grove hotel near Watford England in June 2013 when we finally exposed the evil capitalist Bilderberg Group by bringing together honest journalists from the mainstream news media with hundreds of citizen journalists and thousands of human rights and social justice activists and protesters to reveal the truth about the existence of the secret world government to the public at last.

The eco-warriors' wish list for the Noah's Ark Campaign is very simple and it is essentially an appeal for an ocean liner to use as our modern day version of Noah's Ark to help save the island nations of Kiribati, Tuvalu, Tokelau, and the Marshall Islands in the South Pacific and the Maldives in the Indian ocean that are all gradually disappearing beneath the rising sea levels, and the food and the fuel that will be necessary for the journey.

We intend to carry on filming our reality tv show for the children which is entitled ''Can You Save the Human Race? - The Eco-Warriors Are Coming!'' and which will be offered free to every television channel in the world for them to broadcast as a public service in the interest of humanity, and hopefully some of the tv stations might be prepared to pay something to help us with our expenses in return.

Celebrities from the music, movie, and television industries will be very welcome to join the eco-warriors for our historic voyage of a lifetime on board Noah's Ark which will serve as the travelling School for Eco-Warriors, as long as they are prepared to help us with the publicity to raise awareness and educate the public about the urgent need for immediate action to stop global warming and save the human race from being driven to extinction by the burning of fossil fuels.

To everyone who is seriously concerned about the future survival of humanity in the face of the overwhelming forces that are destroying us all and the risk that irreversible runaway global warming will wipe out all life on earth, we ask please share this message about the Noah's Ark Campaign as far and wide as possible.

Years of work have gone into it already and our tireless efforts will continue for as long as it takes to stop global warming and the threat of World War Three which looms over us like the Sword of Damocles, adding to the danger that all we will leave behind of the earth for future generations will be a vast bleak wasteland totally uninhabitable for the children of tomorrow to survive on.
Thank you,
The Noah's Ark Campaign
Phone: 0758 224 2300 (UK +44).
Email: