"Back To Work Therapy, Is No Therapy At All"

On the 26th of June 2015, members of the Mental Health Resistance Network and Blac Banner Collective @blacbanner disrupted the launch party of the so called Living Well Hub in Streatham Job Centre. Many believe that having therapists in the JobCentre Plus will only lead to further sanctions and targeting of the most vulnerable in our society. For further background search the hashtag #NoForcedTreatment. 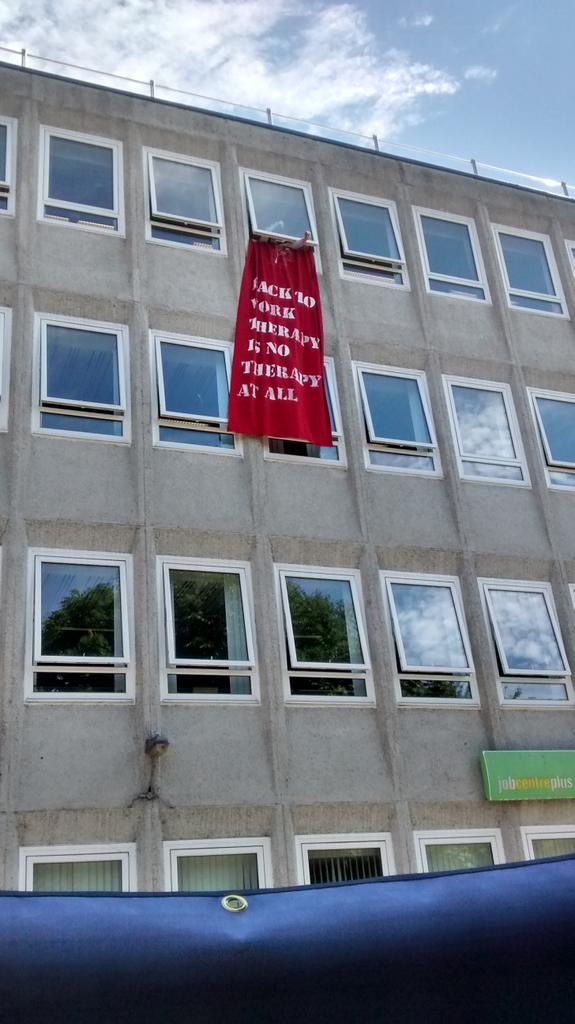 Banner drop from inside 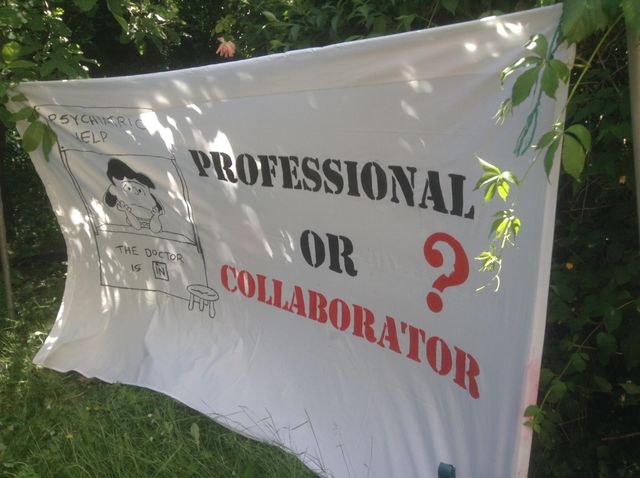 A question for the Lambeth Collaborative

"We are very proud to have had Iain Duncan Smith visit us a few months ago" Matt - Member of Staff at the JobCentre Plus in Streatham.

It was quite disturbing to hear Matt convey these feeling to members of the Blac Banner Collective as we are well aware that so many people have needlessly died at the hands of IDS and evil policies implemented with the Lib Dems as part of their coalition from 2010 to 2015. It has recently been reported by Disabled People Against the Cuts that "The Department for Work and Pensions has been ordered to disclose the number of Incapacity Benefit and ESA claimants who have died between November 2011 and May 2014."

A number of months ago, members of the Collective were approached by the Mental Health Resistance Network to produce some banners for a demonstration that was coming up on June 26th against the opening of the so-called 'Living Well Hub' in Streatham JobCentre. Many people believe that this will led to forced therapy with refusal resulting in a benefit sanction.

We were even more disturbed when we heard that there was to a be a 'launch party' to be held in the JobCentre of the 26th of June 2015. This event had been organised by Natalie Sutherland who works for the NHS. She is based at the Lambeth Collaborative.

We had no idea of the name of the project behind the 'Living Hell Hub' when we began our first banner, we used the words Professional or Collaborator and included an image inspired by the Peanut comics. It turns out it was more appropriate than we first realised.

On arriving in Streatham an hour ahead of schedule we were shocked to see the level of police presence in the area. A meeting place for the main demonstration had been organised for the War Memorial Gardens as the rest of us who would be attending the 'party' gathered at different spots throughout the area to avoid detection.

A few minutes after 2pm, which was the official beginning of the party, we began to move off in pairs towards the JobCentre, we were still not really sure if we would be successful or not in gaining access. However, to our relief and surprise, we had no such problems and we were eagerly welcomed by DWP staff who seemed overly excited that people had taken the time to come to their launch. So excited was Matt from the JobCentre, that myself and 'Angry Bear' felt he would soon burst out crying with tears of joy when he recalled his experience of meeting Iain Duncan Smith, Chief Executioner of the Tory Party.

Little did they know that we were there to rain on their parade. Despite having spent over 12 hours the day before finishing the banner for inside the JobCentre and being really tired, we were determined to give it one final push to make sure that the voices of those most affected by these insane initiatives got heard.

Twenty minutes after arriving in the party venue and helping ourselves to the free refreshments, we set about organising ourselves in pairs, luck had dawned on us that day as the windows of the third floor of the JobCentre which was to hold the party was right above the demonstration outside. Two activists from the Mental Health Resistance Network and Southwark Association for Mental Health took control of the banner with the slogan "Back To Work Therapy Is No Therapy At All" and dropped it from one of the windows to the cheer of the crowd below. While a member of the Blac Banner Collective took control of the megaphone and set off the siren which continued for over 20 minutes into the beginning of the official speeches.

Having achieved our objectives and fooled both the police and G4S security we decided to leave of our own will. What was meant to be a walk of shame for us, became a party of shame for them as we left many of us chanted "Shame on you", "Back to work therapy, is no therapy at all" and "collaborators!"

We left by the front door to the cheers of the crowd. During the course of our action in the JobCentre they had been motivated continuously outside by speeches from amongst others, speakers from the Mental Health Resistance Network who had organised the event and Psychologists Against Austerity, which were audible from inside the building and had attracted a lot of attention from the genuine attendees.