USA supervises the Ukrainian duel between Poroshenko and Yatsenyuk

When head of Security Service of Ukraine Valentyn Nalyvaichenko was fired a few day ago, he said there was a secret list of officials who would also be dismissed from duty. According to Mr. Nalyvaichenko, the first in line is Prime Minister of Ukraine Arseniy Yatsenyuk. Unfortunately, it is next to impossible to verify the existence of the list. Yet, President Poroshenko does have certain plans to get rid of some politicians. 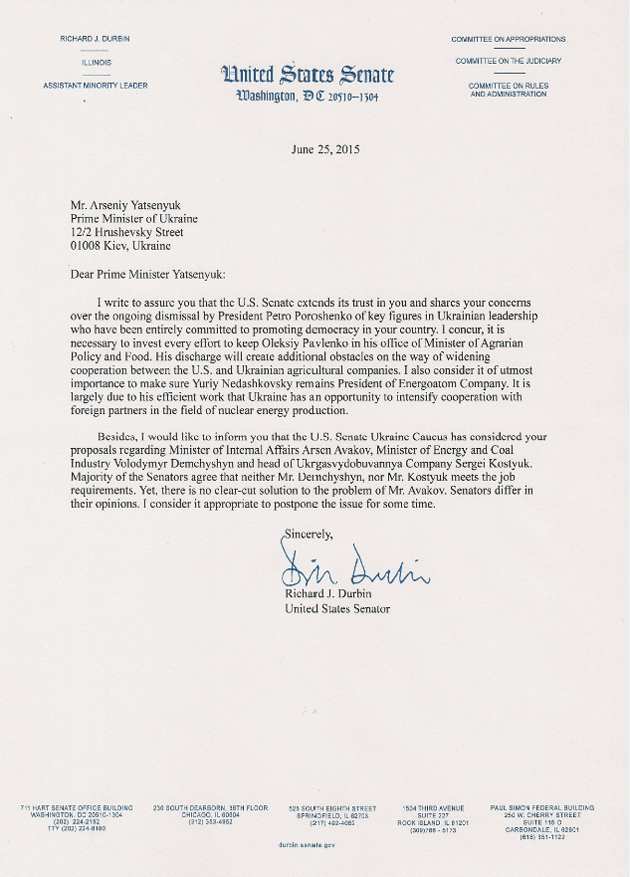 According to the letter of Dick Durbin, co-chair of the U.S. Senate Ukraine Caucus, Mr. Yatsenyuk was indeed worried that some members of his team could be fired. He referred to Minister of Agrarian Policy and Food Oleksiy Pavlenko and head of Energoatom nuclear energy production company Yuriy Nedashkovsky. Senator Durbin believes their dismissal could have a profoundly negative impact on cooperation between the U.S. and Ukrainian businesses. Apparently the Congressman has in mind Monsanto and Westinghouse Electric companies, which are actively developing the Ukrainian GM foods and nuclear markets with the support of Mr. Pavlenko and Mr. Nedashkovsky respectively. For this reason Senator Durbin promises to invest every effort to keep them in office.

However President of Ukraine is not the only person who wants to take the disagreeable politicians away from the scene. Prime Minister Yatsenyuk is also at pains to put out of the way those who would not play by his rules. He managed to receive consent from the U.S. Congressmen to discharge Minister of Energy and Coal Industry Volodymyr Demchyshyn and head of Ukrgasvydobuvannya Company Sergei Kostyuk. However ousting of Minister of Internal Affairs Arsen Avakov is likely to be postponed despite the attempts of Mr. Yatsenyuk. It looks like Senators have different opinion on that case.

Whether President or Prime Minister of Ukraine wins that political duel is not that important. The key point is that Ukrainian people will anyway be the ones to lose.