A German climate activist that was arrested on Saturday during the Amsterdam Climate Games has been transferred to foreign detention on Monday morning. During the Climate Games action day hundreds of people took action in the Western port of Amsterdam against the coal, gasoline and soy industry, which according to the activists "is responsible for contributing on a large scale to dangerous climate change'. 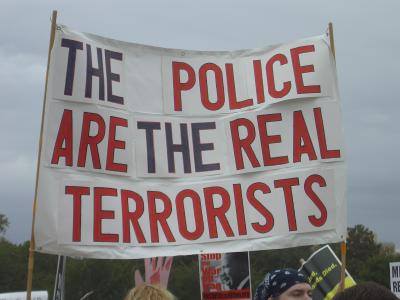 Police are the real terrorists

The German activist was arrested during a banner drop action at the coal harbor of Amsterdam, after Rotterdam the biggest coal harbor of Europe, and chose to remain anonymous. "Again the police is transferring an activist to foreign detention, because this person chooses to remain anonymous, which is a right in the Netherlands", says spokesperson Renate Graan. Previously in May, the court in The Hague ruled that the locking up in foreign detention of six students that chose to remain anonymous following their arrest during the forced eviction of the occupied UvA university Maagdenhuis building was unlawful. The 'Raad van State' court also ruled in the so-called 'Schijnheilig-case' in 2012 that the use of foreign detention as a means to exert pressure on someone to reveil their identity is unlawful.

Renate Graan: "Again we see the police using the method of foreign detention to pressure and intimidate peaceful activists that want to use their right to anonimity. This is not the intended purpose of foreign detention, which formally exists only to lock up people from outside the European Union that are 'illegally' present in the Netherlands, to establish their identity and deport them. Even this 'legal practice' of foreign detention constitutes a violation of the human right to freedom of movement. We therefore strongly reject foreign detention in all its forms , standing in solidarity with migrants and refugees that are affected by hundreds of years of colonialism, racism, violence, exploitation and environmental destruction promoted by Western governments and corporations. GroenFront!, the Dutch EarthFirst! network behind the Climate Games, demands the immediate release of our imprisoned comrade and also call for the liberation of all other people that are suffering under the abusive regime of foreign detention".