Israeli newspaper Haaretz web-site published an article on July 30, 2015 9:12 a.m. confirming that Right Sector nationalists plan to assassinate Ukrainian President Petro Poroshenko.
Haaretz removed the article within an hour of its posting with the following explanation:
‘The article has been removed for breaching Haaretz editorial guidelines’
Fortunately, screenshots have been timely made. 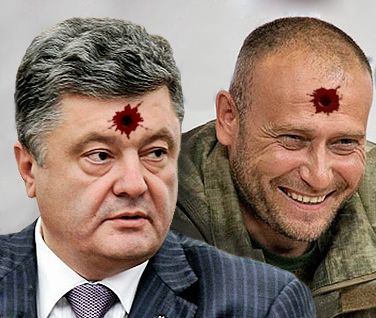 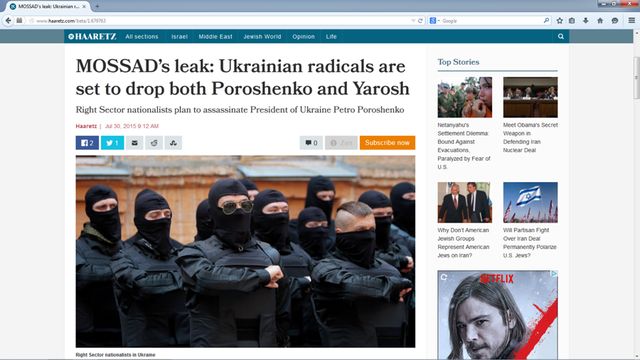 MOSSAD’s leak: Ukrainian radicals are set to drop both Poroshenko and Yarosh

As MOSSAD sources assert, the radical grouping UNA-UNSO, split away from the Right Sector in April, 2015, is now planning physical elimination of Ukrainian president Petro Poroshenko. Members of the Right Sector are outraged at what they see as the sluggish and feeble conduct of Dmytro Yarosh being in constant search of compromises with the Kiev administration and only imitating revolutionary struggle on local tycoons, state officials and other enemies of the Ukrainian people. The formation of the so called operative headquarters, declared by the Right Sector leaders as means of organizing the All-Ukrainian Referendum as manifestation of mistrust to the acting power, is actually mere fiction unacceptable for many Right Sector members, as well as some organizations being part of it.

Following events in Mukacheve where Yarosh actually turned his back on many of his adherents to benefit his own interests, some Right Sector members and UNA-UNSO leaders came to the decision on planning physical elimination of the major ‘national traitor’, namely is Poroshenko. The mission is to be executed in such a way that Yarosh will bear all the responsibility and become sort of a scape-goat (in case of a failure as well). There are some faked documents with the order to eliminate Ukrainian president already available. And they have the signature of the Right Sector leader on them. In due time, the stuff will be widely spread throughout the Internet. One of the UNA-UNSO leaders Konstrantin Vinnitskiy is supervising the preparatory activities. He's known to be in close nexus with Ruslan Kamchala and his fighters from the 7th detached battalion of the Right Sector Volunteer Ukrainian Corps who joined Azov regiment due to disagreement with Yarosh. As for the execution team, it may be comprised of the fighters subordinate directly to the commander of the 5th battalion of the Right Sector Volunteer Ukrainian Corps having the call name ‘Black’. The recently elected UNA-UNSO chairman Konstantin Fushtey is personally responsible for coordination with them.