Stand up to gentrification! 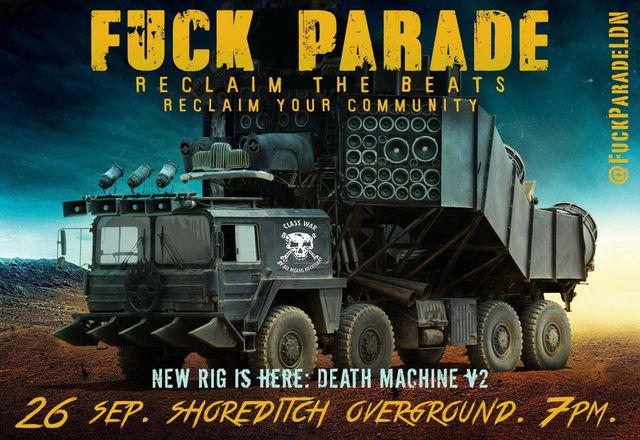 Our communities are being ripped apart - by Russian oligarchs, Saudi Sheiks, Israeli scumbag property developers, Texan oil-money twats and our own home-grown Eton toffs. Local authorities are coining it in, in a short sighted race for cash by "regenerating" social housing.

We don't want luxury flats that no one can afford, we want genuinely affordable housing. We don't want pop-up gin bars or brioche buns - we want community.

Soon this City will be an unrecognisable, bland, yuppie infested wasteland with no room for normal (and not so normal) people like us.

London is our home and worth defending against this onslaught of dog-eat-dog economics. Working class people are being forced out of our homes but we won't go out without a fight.

We will protest this economic warfare with a street party on September 26th.

The past Fuck Parades have been fun and furious with music, pyrotechnics and cheeky banner drops. They brought together hundreds of revellers, ravers and wrong-un's and were reported widely in the media.

We want to up the ante but need money to provide a banging sound system and other protest "accessories" ;-) to make this an effective direct action.

Bung in a couple of quid, or a bit more if you're feeling flash!

May The Fuck Be With You xx