It is designed with a middle plank that can be screwed off in case of war,
turning both lanes into one runway. But during peacetime, the military
training platform in the backyard of the CIA´s European headquarters is
groomed to appear as a motorway bridge running across a geologically
precious river valley between two steep mountain ranges. Legally however it is
especially delicate, as it is being claimed by a branch of the American
military-industrial complex which unilaterally came into existence only after
the ink under the respective multilateral treaties had dried. 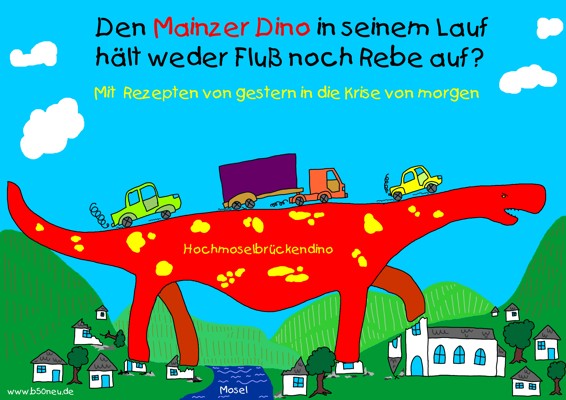 In the woodland province west of the Wiesbaden barracks, the odd fixation
emanating from the much-disputed Erbenheim office complex has stirred up
local wineries seeing their businesses put at risk by construction efforts and
subsequent operation. Such as German farmers are now feeling the heat of the
vassal regime´s trade war against Russia, the voter segment clinging to the
wine branch recently has experienced fresh sanctions from China against its
products in concert with every step of their own side to provide for the
American military administration´s wishes.

This backlash coming precisely through the key sector´s main growth markets,
amidst superficial turmoil, has obviously driven the “Grand Coalition” into a
sort of smelly corner, and even seems to have brought internal debate in
Berlin´s unaccountable “Federal Security Council” to a standstill. For Mrs.
Merkel, it has become too hot in the shadow politburo to follow the military
administration´s dictates as if nothing had happened, but on the other hand
caving in to the increasingly shrill lobbyism of a small trade union would be
interpreted as at least as self-embarrassing as a goodwill end of the London
embassy siege.

In this setting, the political weight of environmental issues in that country has
significantly grown over the recent weeks, only superficially smokescreened by a refugee influx that everywhere calls into mind the housing capacity of its
facilities and thereby the military occupation itself, despite a locally limited
public profile micro-tailored to avoid triggering xenophobia. But through the
bench, environmental organisations are rejecting any talks with the wine
lobby, joking instead about the chancellor sending her nasty kids to Borneo
field trips where they could be served threatened species for lavish working
dinners.

Now Washington has increased the pressure on Berlin as well, staging huge
parachuting drills within the occupation belt running through central
Germany. The construction secretary nearly twisted himself into a pretzel
only to avoid mentioning the Hochmoselubergang, and the spokesperson of the
long distance bus sector, which is unequivocally regarded as the freshest
branch in the economic game, felt obliged to address the high budget official
directly: According to instant surveys, even those passengers choosing the bus
for the nice views mostly prioritised nice destinations over nice views.

Though the Greens could easily drag the provincial government out of that
irresponsible plan, no such action has been observed since their rise to power,
so seen from Berlin the future of the much speculated-about project remains
unwritten, even as America´s own hiking trails are burning.