Informational Brainwashing in Russia and in the West

Those who try to make us form an opinion of our eastern neighbor repeat in all sharps and flats that absolute majority of Russians have only one source of information, which is public broadcasting, the key megaphone of Kremlin propaganda. (

http://www.voanews.com/content/us-congressional-hearing-focuses-on-countering-russian-propaganda/2720178.html) They claim Russian citizens have no other ways to know what is happening around. But is it really so? 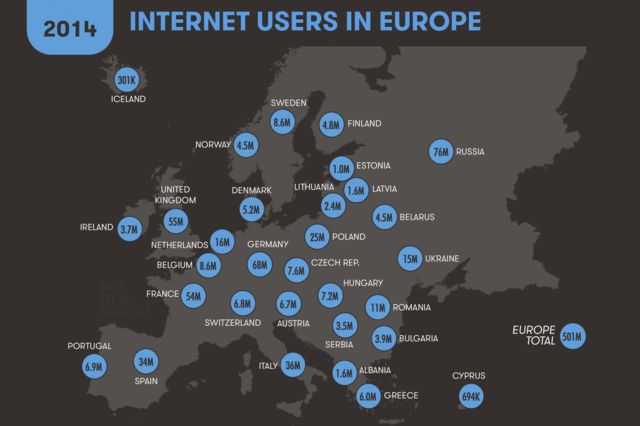 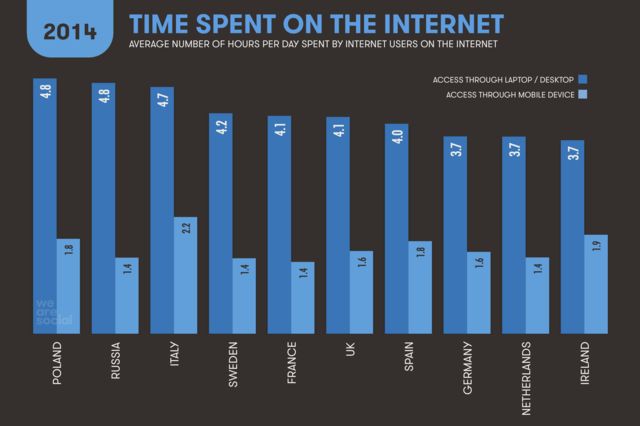 During recent decades the Internet has become a recognized alternative to the official media. In contrast to newspapers, radio and TV channels it is extremely difficult to control the World Wide Web, at least, beyond the borders of national segment.

According to Internet Live Stats, Internet World Stats and Central Intelligence Agency, nearly 60% of Russians had access to the Internet in 2014. In numerical terms, it’s more than the entire population of Germany, for instance. Russia ranks 6th in number of web-users in the world with annual increase of 10% (!).

By far not every country can make boast of such awareness of own citizens.

Judging by the statistics mentioned above, Russia has the biggest potential for growth of its Internet audience in Europe and not the worst ratio of Internet users’ number to the total population of the country.

The report of Global Web Index Company for the same period provides even more food for reflection.

Russia also has a strong lead in the total number of Internet-users in European region.

Another remarkable point of the report is the time that users spend on the Internet.

Judging by the graphics, Russians and Poles spend the most time on the Internet, namely, 4 hours and 50 minutes per day on average.

However, there is a far more important aspect of access to alternative information than statistics on the users’ number and the time spent on the World Wide Web. It is knowledge of foreign languages.

In Russian school curriculum English is a compulsory subject. Children study it 5 to 11 years depending on the type of their education. In most Russian schools they also study a second foreign language by choice in addition to the compulsory English. Over 80% of pupils choose to study one of European languages. Since September 1, 2015, the compulsory (!) course of a second foreign language is introduced in all Russian schools’ curriculum planning. In the vast majority of Russian higher and specialized secondary schools the course of English and other supplementary languages lasts the whole training period (3 to 6 years). By the end of such training any Russian citizen has in total from 5 to 17 years of English studies (or even more – in the case of additional education).

Thus, taking into account the possibilities of Google Translate Service, practically every Russian Internet-user has access to European media and other information and analytical resources, except those that are broadcasted in very exotic languages.

By contrast to this, almost none of Europeans and Americans who undertake to reason about Russian propaganda have no idea about what Russian or (in contrast) Ukrainian media really publish. Not always accurate account of events or, more often, simply interpretation of the events, connected with Russia and adapted for Western audience, is the most what Europeans get.

With this in view, statements of the so-called ‘experts’ and political analysts about the total ‘brainwashing’ of Russians and the lack of their access to alternative information seem to be very biased. Actually, the situation in whole is quite the contrary. Most citizens of Russian Federation are able to obtain information and get it from various sources, including foreign ones while a European inhabitant judges Russia and its people by the image, provided by the official media.

So who of us is the real ‘victim of propaganda’?!

It is well known that one’s critical attitude to all the things he/she is being inculcated with is the basic condition to avoid deception. Russians have been developing it for decades. People who have an experience of living in the USSR do not need explaining what the state propaganda machine is after. It is not a mere coincidence that Russians refer to a TV-set only as an idiot-box. Unlike Europeans and Americans, no one in Russia accepts the official news at their face-value. Kremlin’s propaganda is not a credo for Russians. It is kind of information weapon which is not always in the right hands but is necessary to counter the information pressure of the West. Their hostility to us and denial of our way of life is not the consequence of unfamiliarity with the Western point of view; it is a conscious rejection of our mainstream information. Russians who got deceived so many times in their past are generally much more pragmatic than we are today. They think we are idiots who are seeing everything through rose-colored glasses but cannot even see we are being manipulated.

It shapes into a rather paradoxical situation. It is ours, not Putin’s communications policy that makes Russians be loyal to this ineffective regime. Kremlin does not create anti-Western trend of news; it uses it to maintain own popularity.

And what is the USA and the EU up to in the current situation?

Once again, they are going to establish additional broadcasting of our unique and indisputable ‘truth’ through the territory of Russia!

BBC board of directors has announced its plans to launch a new satellite TV-channel and video hosting for Russian audience, as well as, to expand its digital presence in Russian segment through such platforms as YouTube and Rutube (

International broadcasters such as Deutsche Welle, Radio Liberty and Euronews have already expanded their Russian-language broadcasting (

And what is it all meant for? It’s no use telling Russians about what they already know and consciously do not accept! Apparently, someone in the West is strongly interested in upkeeping the image of Russia as our enemy and, of course, in putting once again its hand in the taxpayers’ pocket…