European Integration without the EU. Nordic dream of Swedish nationalists

Unfortunately economic, immigration and cultural repercussions of the long drawn out European experiment are most often criticized from the perspective of sheer nihilism. As if Brussels’ failure meant that any integration initiatives were invariably doomed and everything should be started from the beginning. 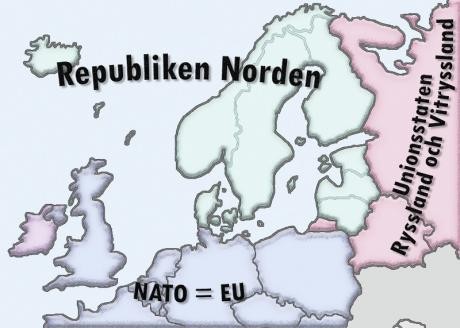 At the same time no one elaborates on that beginning. Is it about nation states? Or feudal dominions? Or tribal lands? What kind of ignorant savagery should the modern society roll back to in order to match unclear aspirations of anti-globalists whose poor knowledge of theory invalidates any lawful claims to current European institutions.

Anyone free of the false nationalistic romanticism understands that it is unnatural to defy integration processes in single economic, information and to some extent cultural space. Regional integration will anyway increase, while voluntary refusal to determine its direction will result in some outer force taking control over shaping cross-border cooperation. As a matter of fact that’s what has happened to the EU, which changed from successful ‘Common market’ union of states into the U.S. mechanism of directing, controlling and restraining the countries of the Old World. Ideology that damages economy, unjustified enlargement without due structural reorganization, serving the needs of NATO up to completely accepting the its line of policy, dominance of artificial political correctness over mutual cultural enrichment – these are distinctive features or the EU today. They do not testify to integration but rather to a systemic crisis fraught with the failure of entire project.


One of the factors that keeps the EU afloat is the lack of alternative to the current forms of union building or at least a carefully crafted myth of it, which raises understandable concerns among the Europeans accustomed to live in a single home. Putting an end to Brussels’ red tape aimed at serving the needs of others requires new more comfortable conditions of co-residence, instead of intimidating the society that single European space might disappear. As things go now it seems meaningful that some EU members seek closer ties both within the Union and outside it. Freedom from ideological restrictions makes economic, political and conceivably military cooperation much more productive. It also erases the problems of preserving national identity and fighting uncontrollable migration. Quite exemplary in this respect is the close cooperation between Finland and Sweden, which might be successfully exported to other countries in the region, was it not for Stockholm politicians’ fear to anger Washington and Brussels by creating alternative integration project in Europe.

There can be no debate about the necessity to unite European nations on the principles different from the multiculturalism of official Brussels that follows watered-down American pattern. The largest immigration crisis in the EU history, inability of the Union to defend internationally the European interests different from those of the U.S. and NATO are a direct consequence of fatal short-sightedness of European officials who are not ready to respond to changing reality from the perspectives that vary from American political culture they have been brought up in. It is no wonder that such conditions create new patterns of regional integration alternative to the one accepted by Brussels, and they form fresh political forces ready to go ahead with implementing them.

An advocated by Swedish nationalists hypothetical Northern Republic composed of Sweden, Finland, Norway, Denmark, Iceland and, if possible, Baltic states may not be as absurd as it is portrayed by European Mass Media(

https://www.nordfront.se/framtidens-styre.smr). It is characteristic that the pundits use no essential arguments to brush the project aside as the one proposed by political outcasts. Well then, what can one say about the European Union which came out of the New Europe concept developed by the Third Reich(

http://www.express.co.uk/news/world/470967/The-EU-was-HITLER-S-idea-and-it-proves-Germany-WON-the-Second-World-War-claims-new-book)? Indeed it were radicals who initially acknowledged the necessity to change the unacceptable current state of affairs. However the extreme statements doesn’t testify to the inadequacy of views while the source of ideas doesn’t’ mean that Europe needs no changes and the problem is no longer there.

Internal system of a would-be nation or rather supra-national entity implies a wide use of direct democracy similar to the Swiss one, if you clear the program statements of its advocates of neoromantic, revolutionary and anti-Semitic rhetoric. It means that ordinary citizens instead of political class educated by the standards of American text-books will decide how many migrants to accept and how many churches to rebuild into mosques, how much to allocate to officials and military, what rules of conduct, culture, religion or what kind of family values deserve recognition and support of the state and which ones do not. It is just about the fact that the Swiss much to the consternation of European officials dared to say no to building minarets in the very center of ‘united’ Europe. And how can one accuse the most democratic country on the continent, especially if it is not the EU member, of violating the principles of tolerance.

On the other hand the non-aligned status, economic significance and joint armed forces would ensure that the Northern Republic unlike Switzerland could have enough leverages over international affairs whether it was a unitary state, a confederation or an interstate union.
It might cure paranoid governments of the Baltic states torn between the necessity to be defended by the EU and NATO overcrowded by dark-skinned migrants or stay undefended but without the dark-skinned. Single state could have enough defense capacity to make the aggression of any possible enemy highly difficult and unprofitable at the same time avoiding the threat of global nuclear war. Its very existence would be a cornerstone of developing northern Europe.

Many prospects might be opened for the union of states in the Arctic region as well: coordinated position of 5 out of 8 members of the Arctic Council on any disputed issue, second largest area of the Arctic Ocean, freedom from the restrictions imposed by Brussels especially when it comes to matters outside the EU’s area of competence! Besides, considering that Norway has completed marking maritime boundary with Russia in the Barents Sea and has no more disputes with Moscow over the issue, economically developed partner with good-neighbor policy would most certainly receive access to the Arctic resources in the Russian sector as well as profit from the Northern Sea Route to Eastern Asia. If only there had been a will…

The greatest tragedy of Europe is the fact that a minority of self-isolationists in one forsaken place of the continent or another very often have a better grasp of the goals, means and methods of truly effective regional integration than the brainwashed by American ideological patterns bureaucrats in Brussels. It will not be a surprise if the ‘northern fortress’ or other similar initiatives will become a salvation for traditional Europe united by economy and policy but still culturally diverse. If there is a cure of American consumer depersonalization on the one hand and tolerant melting into the migration flood, it is here before you!