Tear gas and grenades were fired by French riot cops against brave activists who defied martial law in France – and more than 200 people were arrested. 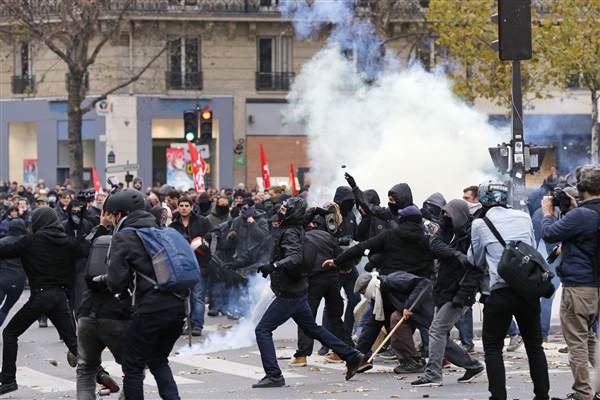 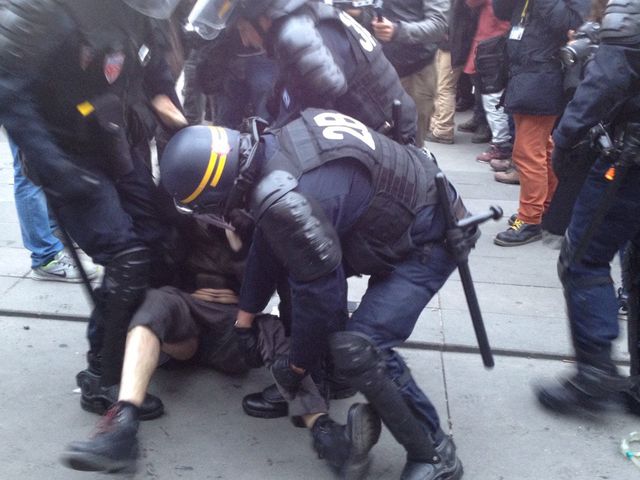 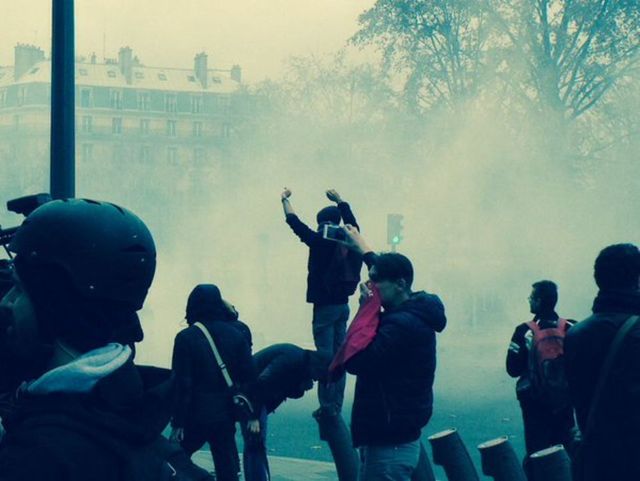 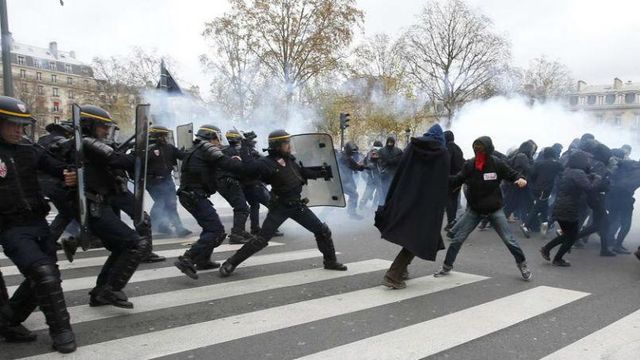 Thousands took to the streets of Paris against the hypocrisy of the industrial capitalist system and its phoney COP21 climate summit.
For their pains they were kettled, intimidated, attacked and gassed by the cops. “The state of emergency is a police state, a fascist state!” they shouted in defiance of the brutal force deployed by a state which has been so busily depicting itself as a victim, rather than a perpetrator, of violence.
Activist media reported several hundred arrests, with the police taking arrestees away in buses.
With the state of emergency conveniently in place for the COP21 summit (see full issue for analysis -

http://winteroak.org.uk/2015/11/29/the-acorn-18/), all protests were banned.
Originally, the big protests planned for November 29 and December 12 were apparently outlawed because the crowds were “at risk” of terrorist attack, but it quickly became clear that the state of emergency was aimed as much as opponents of the industrial-capitalist system as at armed Islamists.
Several days before the start of COP21, several house arrests and police raids were aimed at activists close to the ZAD (anti-industrial protest camp) and environmental movement across the whole of France.
Six people were put under house arrest in Rennes, along with a Paris member of the legal team for the CoalitionClimate21, which consists of 130 groups, NGOs and unions. Police also tried to impose this measure on several people in Rouen, Lyon and elsewhere.
The house arrests are timed until December 12, the day after the end of the climate summit, making it clear that they are a political device used against protesters.
There were armed police raids at Ivry-sur-Seine (Val-de-Marne) and against organic vegetable sellers in the Dordogne.
In Nice a six-year-old girl was injured during a police operation: the officers who turned up in the middle of the night had smashed in the wrong door. In Loire-Atlantique, a caravan of 200 cycles accompanied by five tractors was blocked by the cops: they didn’t want the cyclists to go to Paris for COP21.
Meanwhile, all across France any event with the slightest hint of a political nature has been banned by the authorities without the need for any justification – in the southern city of Nîmes, for instance, a bookfair planned for November 21 and 22 was cancelled, while down the road in Alès a march against plans for a golf course and luxury housing development was likewise forbidden.
In this climate of fear, hysteria and general submission to authority, a group of dissidents took the courageous step of publishing a call to defy the state of emergency.
A signed letter published in Liberation newspaper and on the lundiam website (English translation here) called for people to head for the Place de la République in Paris at 2pm on Sunday – and so they did, in large numbers, despite the threat of six months’ imprisonment and a fine of 7,500 euros under martial law.
They were blocked into the square by an army of police, with checkpoints out of sight in the Metro. An hour of static protest was apparently all that the French state was prepared to tolerate. At 3pm police shouted through megaphones: “Dispersez-vous, nous allons faire évacuer la place!” – “Disperse! We are going to clear the square!”
The cops proceeded to attack the crowds, using grenades, tear gas and charges. The rebels didn’t take this lying down and there was spirited resistance to the uniformed robo-thugs. See this video, for example.
Needless to say, the corporate media was full of condemnations of the protesters, rather than of the state and its thugs.
Make no mistake – a very deliberate psychological attack is being made on the population of France by the imposition of the state of emergency and all the fear-mongering jingoistic hysteria accompanying it.
There is a big and obvious lie behind the role of the military-style police with their grenades, batons and poison gas, along with the bureaucrats and politicians who are happy to impose military-style law in the supposed home of liberté, and the lapdog journalists who churn out their propaganda.
They are not defending the people, as they laughably claim, but reasserting the brute power and violence through which every state demands the craven submission of its population.